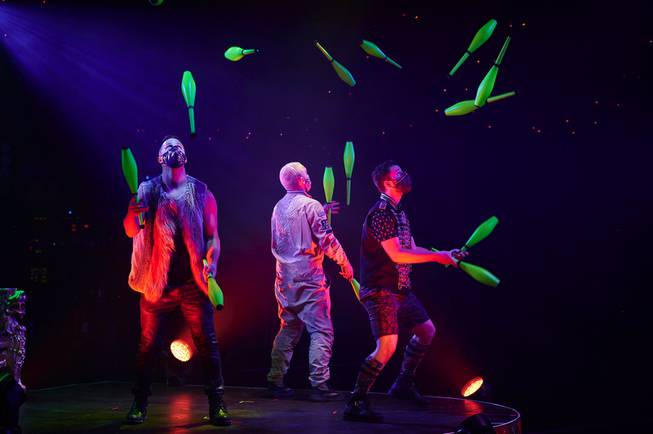 Juggling outfit Water on Mars performs during the reopening show of Absinthe at Caesars Palace on October 28.

“While Caesars Entertainment remains focused on the well-being of our team members and guests, we also understand the transformative power of live entertainment, especially during these challenging times,” said Jason Gastwirth, president of entertainment. “We sincerely thank our talented performers, show partners and staff as we navigate through this together, and of course, we thank our guests in advance for the cooperation and commitment to following our health and safety requirements.”

Across the Caesars portfolio, Piff the Magic Dragon’s show at Flamingo is the primary casualty of the temporary restrictions and will look to resume performances at the Flamingo Showroom when circumstances loosen.

“We’re disappointed to have our venue’s capacity reduced even further despite our best-in-class safety protocols, but we remain committed to entertaining and innovating as safely as possible through this pandemic to help ensure the livelihood of our artists and staff,” said Spiegelworld’s Ross Mollison, producer of “Absinthe.”

Prior to the announcement on November 22 of the 50-person audience cap, “Extravaganza” creator and director Hanoch Rosenn spoke of the challenges and significance of bringing that show back to the Jubilee Theater at Bally’s, the biggest production to come back to the Strip since the March shutdown of live entertainment.

“When you see all the procedures everyone is doing in order to bring back shows in a safe way, it really brings a lot of confidence for everyone. If you want to go see a show, you should feel very confident,” he said. “You know exactly where you’ll sit and in six feet in every direction, there’s no one there. The cast is at least 25 feet away if not more, and you go into and leave the theater very slowly and orderly. It’s very safe all the time with a mask on, even safer than a restaurant.

The Venetian’s original “This Is Christmas” show was cancelled due to the new restrictions but the holiday performances will continue at the Vegas Room. “A Vegas Room Christmas” is slated to open December 2 with all health and safety protocols in place at the supper club and listening room at Commercial Center just east of the Strip. Twenty shows through December 27 will feature a rotating cast including familiar names such as Randal Keith, Amanda King, Michelle Johnson, Carnell Johnson, Janien Valentine, Ruby Lewis, and many more. Find reservation information at thevegasroom.com.

There are livestream shows galore coming out of the Space this week, holiday-themed and otherwise, starting with “The Carpenters Tribute Concert: A Christmas Portrait,” starring Sally Olson and Ned Mills, on November 28 at 5 p.m. Also coming up: Tony nominee Carmen Cusack on December 2; guitarist Pavlo’s Christmas show on December 3; John Lloyd Young’s “Vegas Holiday” on December 4; and the big Mondays Dark 7th anniversary spectacular on December 7. Pay-per-view prices vary and you can get all the info you need at thespacelv.com.

Spencer Novich, a versatile actor and entertainer in played a prominent role in last year’s “Blanc de Blanc” show at Sahara, has landed a role on the upcoming season of “American Horror Story” on FX. If you were lucky enough to see him stealing scenes on the Strip stage, you probably can’t wait to see what he does on the small screen.