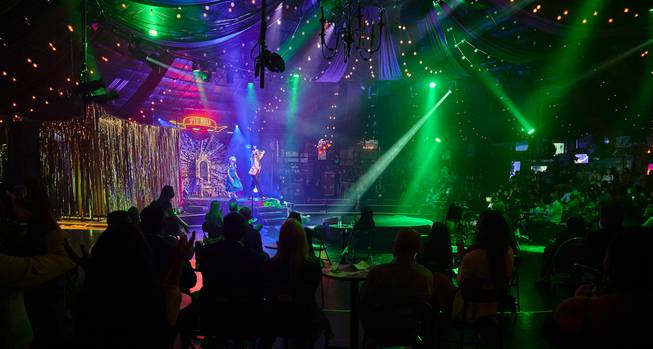 Get ready for a lot more “Absinthe” at Caesars Palace.

After fighting its way back to the Spiegeltent stage at Caesars Palace not once but twice through the pandemic and celebrating its 10th anniversary on the Las Vegas Strip in April, “Absinthe” is making another big move. Starting on July 4, the show will return to its pre-pandemic nightly schedule and, for the first time, will expand to 16 shows a week. That means two shows Sunday through Thursday and a mind-boggling three shows a night on Friday and Saturday. “It’s time to get back to work, ‘Absinthe’-style,” producer Ross Mollison said in a statement. “Vegas has demanded more shows, more seats … as the visitation to the Strip goes through the firmament. Our company and guests have waited for this moment, the chance to live our lives the way we want. We all want Vegas life back, and from July Fourth on, we’ve got it.”

The Comedy Cellar at the Rio just recently returned to a nightly performance schedule at 7 and 9:30 p.m. These weekend’s standups include Butch Bradley, Derek Richards, Nikki Carr and Michael Yo with resident emcee Mark Cohen, with Jeff Leach, Dennis Blair and Kathleen Dunbar taking over on Monday.

With various venue closures and show shufflings within the Caesars Entertainment empire coming to light last month, the long-term fate of unique comedy artist Tape Face at Harrah’s Las Vegas was a bit uncertain to say the least. But the show created by and starring New Zealand entertainer Sam Wills is immediately increasing guest capacity to 400 inside Harrah’s Showroom, where it reopened during the pandemic in November, and a Tape Face rep confirmed the production will continue there through July before returning to its original venue, the smaller House of Tape. The current schedule is at 7:30 p.m. Wednesday through Sunday.

Blue Man Group is preparing for its big comeback on June 24 at Luxor, but the show is already adjusting its summer schedule. It’ll open with performances at 8 p.m. June 24 and 25 and then quickly shift on July 1 to shows at 5 and 8 p.m. Thursday through Monday. Additional 2 p.m. performances are set for the Fourth of July and Labor Day weekends and tickets are available at blueman.com/vegas.

Live music has been back for a while now at Stoney’s Rockin’ Country at Town Square and this week the popular nightclub and bar is celebrating the return of full capacity by bringing back line dancing. Free dance lessons are offered at 7:30 and 8:30 p.m. Thursday through Saturday, and it’s a good time to get tuned up because the Stoney’s stage welcomes JT Harker on Friday, Ian Flanigan on June 11 and Aaron Goodvin on June 18. Tickets for those country concerts are on sale now.

Station Casinos has rolled out dozens of dates for live entertainment at the company’s various venues, another welcome return. Coming up quickly: Niko Moon at the Rock Lounge at Red Rock Resort on June 10, Keiko Matsui at Santa Fe Station’s Chrome Showroom on June 11 and Franky Perez at good-old Club Madrid at the Sunset Station on June 12. The full schedule can be found at stationcasinoslive.com.

Speaking of concerts away from the Strip, the Las Vegas Ballpark in Downtown Summerlin will host its first concert on the field on June 26 featuring British Rock Royalty, a tribute act from longtime Las Vegas musician Brody Dolyniuk, and Femmes of Rock. Tickets start at $20 and are on sale now at thelvballpark.com/events.

Alain Nu, star of “The Man Who Knows” at the Alexis Park Resort, will celebrate his 100th Vegas performance on June 11 in the resort’s Pegasus Showroom. Nu started his residency there in November and is currently performing at 4 p.m. Friday through Sunday.