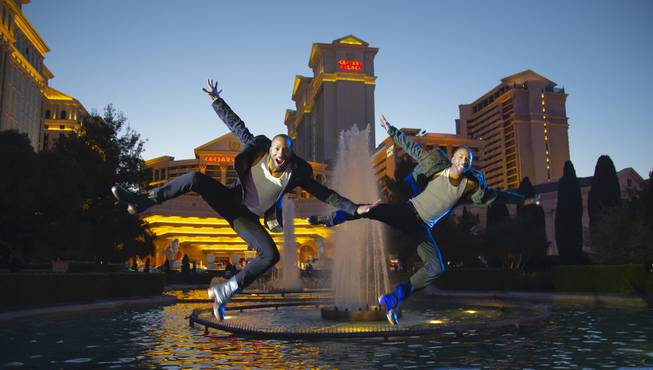 Sean and John Scott perform at the fountains at Caesars Palace to celebrate the 10th anniversary of “Abinsthe.”

It wasn’t the anniversary celebration that “Absinthe” deserves, but Spiegelworld’s powerhouse production at Caesars Palace marked its 10th year this week on April Fool’s Day. The infamous host and “owner” of the show, the Gazillionaire, toasted to his own success along with castmates Wanda Widdles, the Green Fairy and tap-dancing twins Sean and John Scott on the iconic fountains at Caesars just steps away from the “Absinthe” Spiegeltent.

“I know Vegas entertainment is coming back strong with the removal of the 25-foot stage distance rule, but to be honest, I’m quite comfortable keeping a moat between myself and others,” Gaz joked in a statement. “Normally I’d be expected to throw a lavish anniversary party. This year, I don’t have to waste all that cash on people I don’t know and I can just blame social-distancing regulations. Sweet!”

Prior to the pandemic, “Absinthe” was performing twice nightly 365 days a year. After closing in March 2020 along with every other Las Vegas Strip production show, it reopened on Oct. 28 before another temporary closure, reappearing again on March 17. It’s currently running at 7 and 9 p.m. Wednesday through Sunday.

“At our 8th anniversary party in 2019, the Gazillionaire acted as our first tree-J as we switched on the Absinthe Electric Oak. If you had told me then that I wouldn’t be at the 10th anniversary, I would never have believed you, but here I am quarantined in a hotel in Sydney [Australia],” Spiegelworld founder Ross Mollison said in a statement. “It has been a very tough year for everybody and we can’t wait for the day when we can all get together for a real party. For now, the best anniversary gift is the fact that we were able to get ‘Absinthe’ back onstage, restoring the jobs of many Spiegelworld employees, and experiencing the joy of bringing live entertainment back to the entertainment capital of the world.”

In other April Fool’s Day Vegas funny business, stand-up comedy legend and longtime Las Vegas resident Eddie Griffin previewed a new documentary special “Laughin’ Through Your Mask” on Thursday for a small local audience, with a full release planned for April 20 on iTunes and Amazon streaming platforms. Griffin toured as much as possible over the course of the pandemic year and took on hot topics, as he always does, from the stage. The special was filmed the day after the January 6 attack on the U.S. Capitol, so expect some serious fire from Griffin when you watch. You can also expect him to return to his stand-up residency at the Sahara sometime this year.

Tickets are on sale today for the two latest concert engagements on the Strip announced this week. Billy Idol, who just wrapped a mini-residency at the Pearl at the Palms before COVID touched down in Las Vegas, will perform at the Chelsea at the Cosmopolitan on October 16, 17, 22 and 23. And classic rockers Styx, an outfit that also performed early last year at the Pearl, will take over the Venetian Theatre September 25 and 26.

A new musical tribute show launches this weekend at the busy Athena Showroom at the Alexis Park Resort. “The Purple Piano,” a one-man show created and performed by producer and recording artist Marshall Charloff paying homage to the legendary Prince, will take the stage at 8 p.m. Thursday through Sunday and tickets, starting at $49.95, are available at ticketkite.com.

More big deals worth your time this weekend: Terry Fator continues his limited engagement at New York-New York; local artists take the stage at the Space with the Yahz Chyld Collective Friday and the Mega-Scopes on Saturday; Kelly Vohn performs her tribute to Barbra Streisand at the Vegas Room Friday and Saturday; and Clint Holmes returns to Notoriety Live Saturday afternoon for the next installation of his “Regeneration Series.”

Resorts World Las Vegas still hasn’t announced its official opening date this summer but it did unveil its expansive food and beverage portfolio this week, and one of its restaurants will also serve as a sportsbook and live entertainment hub. Dawg House Saloon, which originated on Nashville’s famed Music Row, will be a sports bar adjacent to the Resorts World book that will feature live music and dancing. And speaking of the musical offerings planned at the new Strip resort, nightlife partner Zouk Group has revealed more details about the J Balvin-curated Neon weekend mini-fest set for Mexican Independence Day weekend. A welcome night at AYU Dayclub on September 10 will feature Karol G, DJ Pope, Agudelo888 and the debut performance of Tainy, already a star producer and songwriter in the reggaeton world. J Balvin will perform at AYU on September 11 with special guests Jowell & Randy, Matt Paris and Cornetto with an afterparty featuring Sky Rompiendo and Sita Abellan.