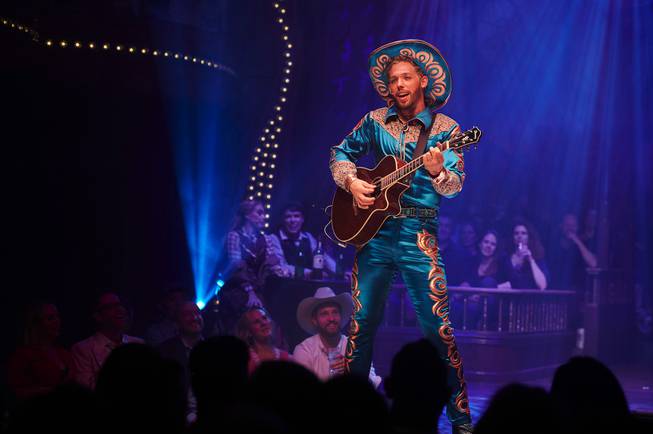 Colin Cahill in “Atomic Saloon show” at the Grand Canal Shoppes at Venetian.

It’s another big week for reactivated venues and shows in Las Vegas. “Mat Franco: Magic Reinvented Nightly” made its triumphant return to the Mat Franco Theater at the Linq Thursday night and continues at 7 p.m. Thursdays through Mondays with an extra 9:30 p.m. show Saturdays. The Comedy Works at the Plaza brings the laughter back tonight and Saturday at 9 p.m. with headliner Kevin Farley in the downtown casino’s fantastic throwback showroom. Next up is the return of “Atomic Saloon show” at the Grand Canal Shoppes at Palazzo on May 5, Spiegelworld’s second production to return to the Strip after “Absinthe,” and it’ll play at 7 and 9 p.m. Wednesday through Sunday. Then more magic and music returns with “The Magic of Jen Kramer” and “Soul of Motown” reopening at the Westgate Cabaret on May 7. Kramer is back onstage at 5 p.m. while the musical tribute follows at 7:30 p.m. Fridays through Sundays.

Special live entertainment options this weekend include: singer Jackie Wiatrowski at the Piazza Lounge at the Tuscany Saturday night; Original Chaos (which features singer and musician Colin Scott Cahill from the aforementioned “Atomic Saloon show”) rocking its way through the Eagles’ classic “Hotel California” at the Space tonight, plus Broadway favorite John Lloyd Young performing his “By Request” show there Saturday night, PLUS the David Perrico Pop Strings Orchestra doing a big band tribute to Disney tunes Sunday, also at the Space; “Sexxy” singer and host Gabriella Versace performing a tribute to the legendary ladies of music with guests Zowie Bowie Friday night and Justin Shandor Saturday, plus the great Bill Fayne on piano, at the Vegas Room; and Shandor, one of the best Elvis tribute artists in the biz, performing all kinds of music from the great American songbook Sunday at the Italian American Club.

Justin Shandor stars at the IAC this weekend.

There’s been no official announcement about more live entertainment options returning to the Tropicana but tickets are scheduled to go on sale May 3 for the longest running show in Las Vegas, “Legends in Concert,” starting on May 27. The music and comedy stalwart featuring tributes by superstar impersonators with Frank Marino hosting as Joan Rivers has been settling in at the Trop since 2019 and originally debuted in Vegas in 1983. The perennial Prince tribute show “Purple Reign” starring Jason Tenner is also expected to return to the Legends in Concert Theater soon.

The long-running Aces of Comedy stand-up series at the Mirage is set for its own comeback in July. When these performances and others last landed at the 1,200-seat venue that once was home to Siegfried & Roy, it was still known as the Terry Fator Theater. Now Fator is performing at the former “Zumanity” room at New York-New York and this space is simply known as the Theatre at the Mirage. The return of comedy here is a strong indicator that its other residents, sleight-of-hand master Shin Lim and R&B legends Boyz II Men, will likely return this summer as well. Tickets are on sale now for the following Aces of Comedy shows: Tom Segura on July 2-3, Chelsea Handler on July 10, Bill Maher on July 16-17, Gabriel Iglesias on July 23-24, and Jim Jefferies on July 30-31.

As reported in this week’s Sun on the Strip podcast, Dave Chappelle is coming back for more Vegas. The comedian already scheduled a show on July 2 at MGM Grand Garden Arena and will return the following week with co-headliner Joe Rogan for a performance on July 9, with tickets on sale today.

Also announced this week: Marc Anthony returns to the Strip with a tour stop at Mandalay Bay’s Michelob Ultra Arena on October 23. The singer kicks off his run August 27 in San Antonio and plays twice in Canada along the way. Tickets for his Vegas concert are on sale now at marcanthonyonline.com.

“Martinis & Magic” has taken up at the Mint Tavern on West Sahara — in the same Strip-adjacent center with the legendary Golden Steer Steakhouse — featuring two-time Academy of Magical Arts Stage Magician of the Year, Dimmare. He’s performed around the world and is known for a throwback, Rat Pack-influenced approach to magic and comedy, which should be a good fit for the retro vibes at the Mint. The show happens Tuesdays at 7 p.m.