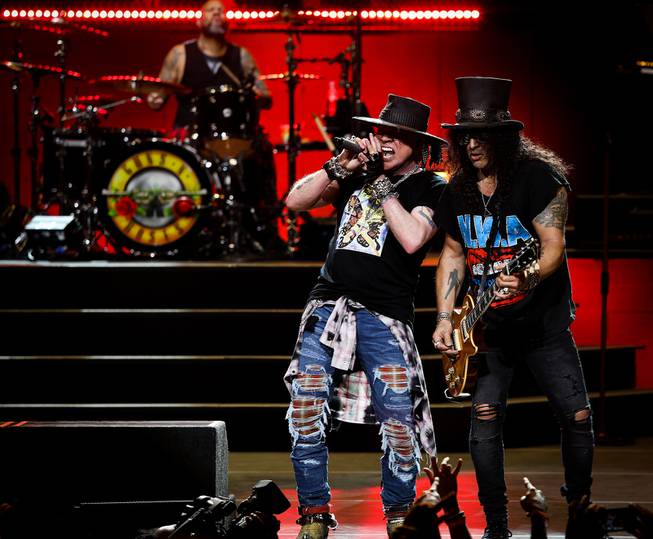 Guns N’ Roses performing at the Colosseum at Caesars Palace.

“America’s Got Talent Las Vegas Live” at the Luxor was finally announced on Tuesday, a new production show based on the famous TV talent competition that had been long rumored for the 1,500-seat Luxor Theater left empty after the closure of Cirque du Soleil’s “R.U.N” show just before the pandemic struck.

The new resident production will debut on November 4 and perform for 75 minutes two times nightly, five nights a week, featuring many of the most popular performers from the TV version — not just magicians, acrobats and stunt acts that would obviously work well at this room on the Strip, but vocalists, dancers and other types of artistry as well. MGM Resorts, Simon Cowell’s Syco Entertainment and producers Fremantle are teaming up for the project.

“Ever since we launched ‘America’s Got Talent,’ it’s always been my dream to have ‘America’s Got Talent Live’ in Las Vegas. I am beyond thrilled that this is now going to happen,” Cowell said in a statement. “And extremely proud to be working with MGM and to have the Luxor Hotel as our home. I am now so excited for our launch.”

It’s quite possibly the most natural fit for a Vegas show in a long time, considering current Strip headliners Terry Fator, Mat Franco and Shin Lim all landed their own residencies after winning the top prize on “AGT,” and countless other Vegas performers took a turn on the TV show before or after landing their own local gigs. Tickets are on sale now at agtvegaslive.com.

By the way, the Luxor Theater isn’t actually empty. Female revue “Fantasy” and the familiar comedy stylings of Carrot Top have been performing in that room for months now because health and safety restrictions wouldn’t allow for the reopening of the two shows’ regular home, the Atrium Theater at Luxor. Things are about to go back to normal. It looks like “Fantasy” moves back to the Atrium on July 5 and the Carrot does so on July 12. Something similar will happen with the Jabbawockeez at MGM Grand when the dance troupe’s show moves from the Grand Garden Arena back to their casino theater on July 8.

With this week’s major announcements that the WWE’s massive pro wrestling supercard Summerslam will land at Allegiant Stadium on August 21 and Guns N’ Roses will be the first rock band to play the venue on August 27, the schedule at the 65,000-seat stadium built to house the Las Vegas Raiders is getting quite crowded … and that’s a good thing. Dance music star Illenium’s special “Trilogy” show is set for July 3, Garth Brooks plays the stadium on July 10, the Concacaf Gold Cup Final soccer event is on August 1, and the Raiders meet the Seahawks in a preseason game on August 14. The GNR show will feature Wolfgang Van Halen’s new band Mammoth WVH as special guests (Las Vegas-born guitarist Frank Sidoris plays in that group) and tickets go on sale this Saturday at gunsnroses.com. Summerslam has never been held at an NFL stadium before and presale ticket opportunities are available at summerslam.com/presale.

After way too much time off and a series of incredible virtual shows, Santa Fe and the Fat City Horns will finally be back home at the Copa Room at the Bootlegger Bistro on June 14. The show starts at 7:30 p.m.

The Cosmopolitan announced a slew of shows for the Chelsea this week. Comedian Dane Cook returns on August 21; Pop singer-songwriters Quicnn XCII and Chelsea Cutler take the stage on October 3 during their Stay Next To Me tour; and Brockhampton, the self-proclaimed “best boy band since One Direction,” will perform on April 8, 2022, as part of its Here Right Now tour.

Also announced this week: Grammy-winning singer-songwriter Bryan Adams will finally make his Wynn debut on November 10, now set for six shows at Encore Theater through November 20, his only tour stops in the U.S. this year. Adams was supposed to play four nights there last April. Tickets for the new dates are on sale Friday.

And four more later dates were added to the Debbie Gibson and Joey McIntyre run set for the Sands Showroom at Venetian, on September 16-19. The four previously announced shows on August 26-29 are sold out. Tickets for the new dates are on sale now at venetian.com.

Call it Beethoven’s revenge: After last performing at Reynolds Hall at the Smith Center on March 7, 2020, the Las Vegas Philharmonic excitedly announced its comeback with the 2021-22 concert season this week, seven performances that include all of Beethoven’s symphonies interwoven with contemporary works by female composers. The season starts on November 20 with the Beethoven Triple Concerto, also featuring a work by Missy Mazzoli and artist-in-residence Joshua Roman on cello. For the complete season schedule and ticket information, visit lvphil.org.

Downtown Rocks, the popular free concert series along the Fremont Street Experience, is also back for the summer. There are nine show currently scheduled stretching into November, starting with alt rock act Chevelle on June 26 and country favorites Craig Morgan and Clay Walker teaming up for a Fourth of July performance. For more info and the complete schedule, visit vegasexperience.com.

John Lloyd Young returns to his home away from home in Las Vegas, the Space, for a new show dubbed “Solid Gold” on July 9. The singer from “Jersey Boys” will once again team with pianist and musical director Tommy Faragher for a new set of songs focused on disco, funk and soul.

Things are heating up at the Laugh Factory in July, the comedy club at the Tropicana that managed to reopen with live performances way back in early November and stay open, for the most part, since then. “Saturday Night Live” alum Jon Lovitz takes the stage July 12-17 and 19-21, Pauly Shore plays on July 26 and Jamie Kennedy performs July 30 through August 1. Las Vegas resident Louie Anderson, a longtime headliner in various local clubs, is also set to start a new residency at the Laugh Factory late next month as well.