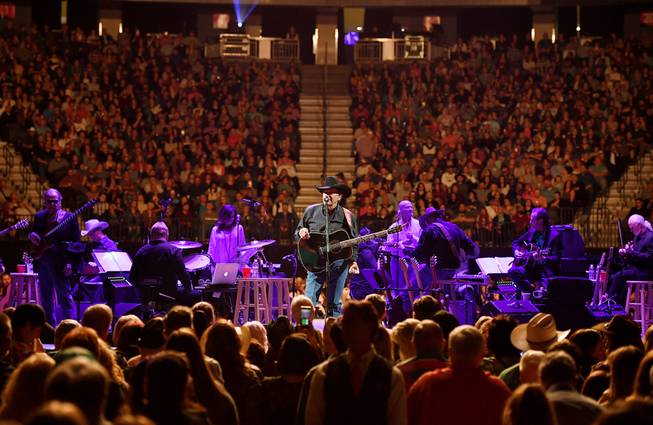 He’s back: George Strait is ready to return to T-Mobile Arena.

You know Vegas is on its way back when the king of country is making his way to the Strip once again. Record-breaking T-Mobile Arena resident headliner George Strait returns for two “Strait to Vegas” shows on August 13 and 14, with support from special guest Caitlyn Smith. Those who had tickets for postponed 2020 shows can apply them to these new dates and additional tickets are on sale now at straittovegas.com.

Another major announcement for postponed shows came from the Jonas Brothers this week. The group had famously planned a mini-residency at Park Theater for April 2020 as part of a reunion tour and now the bros will make good on that promise with a pair of shows on August 20 and 21 at that venue. The concerts will serve as the kickoff for the group’s new 44-date “Remember This” tour, which also features special guest Kelsea Ballerini. Tickets go on sale May 27.

It was only a matter of time before illusionist Shin Lim reopened his show “Limitless” at the Mirage and this week MGM Resorts announced he’ll be back onstage with special guest star Colin Cloud on July 1. Tickets are on sale now and the schedule includes performances at 7:30 p.m. Thursdays through Mondays. Further strengthening Lim’s position as a true Strip headliner is the announcement that he has signed on for a multi-year residency in the Theatre at the Mirage.

Speaking of magic, Criss Angel — who recently announced his show’s comeback at Planet Hollywood for July 7 — is getting into the restaurant business in Overton, Nevada, about an hour’s drive from Las Vegas. Angel and his partners, brother Costa Sarantakos and pizza maker Mike Baram, have purchased Sugar’s Home Plate restaurant and will be converting it into a fast-casual spot called Criss Angel’s Breakfast, Lunch & Pizza. Angel said he fell in love with the town and the eatery while taking his son, Johnny Crisstopher, on desert dirt biking trips nearby. The renovated restaurant should open in July.

The Space continues to provide a Vegas home for the stars of Broadway with this weekend’s Stage Door concert featuring Ruby Lewis, John Krause, Syndee Winters, Michael James Scott and Adam Pascal each performing 45-minute sets. The music starts at 4 p.m. Saturday and tickets and livestream capability can be found at thespacelv.com.

If you’re looking for some fun this weekend, here’s the rest of the Vegas agenda: Electronic music artist Deadmau5 performs at the first live event at the Downtown Las Vegas Events Center tonight with another EDM rave-up from Insomniac’s Factory 93 brand set for Saturday; Jazz in the Park continues with sax master Najee Saturday at the Clark County Government Center Amphitheater; Jassen Allen takes a break from his role as musical director and gets onstage at the Nevada Room with “Crossroads” Friday and Saturday; Carnell “Golden Pipes” Johnson plays the Sunday brunch show at the Vegas Room next door; the new “Laugh After Dark” comedy spotlight hosted by Charlie Wilson brings the laughs to Notoriety Live Saturday night; and the one and only Justin Shandor returns as Elvis to the Italian American Club for a Sunday dinner show.

Superstar rap trio Migos will be returning to Las Vegas this fall for Culture III, a packed series of concerts, parties and events at different venues in partnership with Pollen Presents, the company that is also bringing J Balvin to Ayu Dayclub at Resorts World in September. Migos’ nonstop weekend of pool parties and club takeovers — which could also occur at Resorts World — is set for October 14-17.

Free live music on the three stages along the Fremont Street Experience is finally set to return on June 1 at midnight. The schedule of bands and acts is expected to be announced next week.