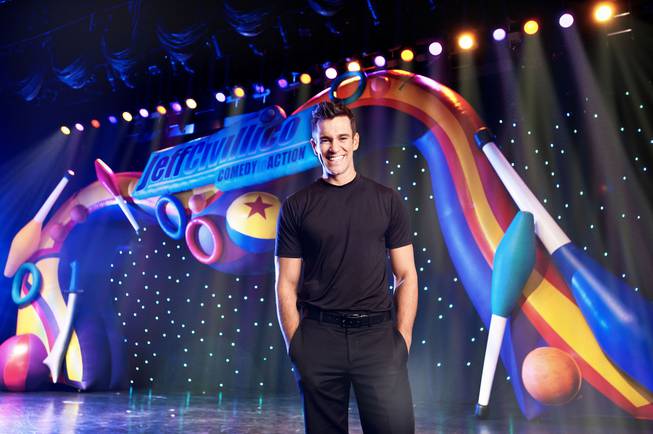 “Jeff Civillico: Comedy in Action” has been one of my top recommendations for anyone looking for a funny, family-friendly show on the Las Vegas Strip. Now I recommend you see Civillico while you can — the juggler, comedian, and all-around entertainer is leaving the Strip. The final performance of his show at the Anthony Cools Showroom at Paris Las Vegas is set for December 18.

Civillico has been a Strip fixture for 10 years, performing at the V Theater at Planet Hollywood, the Planet Hollywood restaurant at the Forum Shops, Imperial Palace before it turned into the Quad and then the Linq, the Flamingo and finally Paris. Although he signed a two-year extension with the Caesars Entertainment property to open 2019, he’s decided to shift his focus to the other sides of his career, a lucrative gig as host and entertainer for corporate events and the continued development of the nonprofit organization he founded years ago, Win-Win Entertainment. Its mission is to arrange for professional talent to perform for youth in need at children’s hospitals and foster homes across the country. Win-Win currently operates in Las Vegas, Minneapolis, New York, Orange County, Orlando, Phoenix and Reno, and Civillico is working to expand to 20-plus cities.

“I’m so grateful for the relationship I’ve had with Caesars Entertainment for the last decade,” said Civillico. “They’ve been just an incredible partner. Although this is bittersweet for me, I’m genuinely excited to see how many more lives we can impact when I make Win-Win Entertainment my No. 1 priority.”

The House of Blues at Mandalay Bay is once again offering special ticket deals during the holiday season for several upcoming shows. Ticket buyers can use the code “BOGOTIX” to unlock exclusive buy one, get one offers at houseofblues.com, mandalaybay.com or ticketmaster.com, or by calling 702-632-7600. The offer is valid on the following shows: The Eli Young Band on December 6, A Drag Queen Christmas on December 7, Snoop Dogg on December 10, The Dan Band on December 14, DJ Quik on December 27 and more.

Cirque du Soleil isn’t just expanding here in Las Vegas. The Canadian company is collaborating with Grupo Vidanta, a leading developer of resorts in Mexico and Latin America, to create a new water-themed show and dinner experience opening in 2021 at the Nuevo Vallarta resort area in Mexico. In addition to the specially designed theater already under construction, the area will feature multiple acrobatic and artistic attractions where guests can immerse themselves in the world of Cirque du Soleil. More details are expected soon.