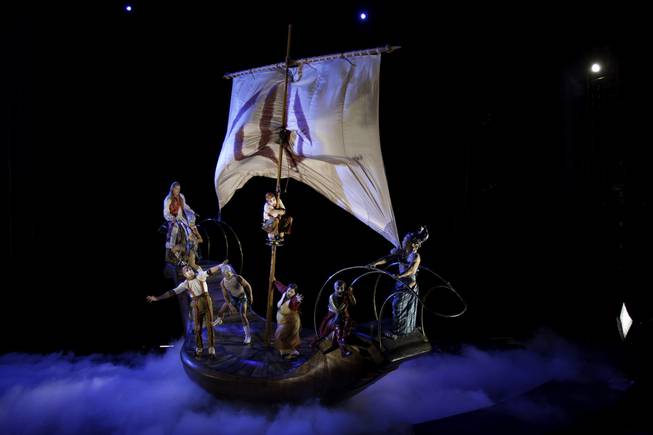 Cirque du Soleil’s “KA” is back onstage at MGM Grand.

The circle of Cirque is complete. “KÀ,” the final Cirque du Soleil show to reopen on the Strip, returned to its custom theater and ever-changing stage at MGM Grand Wednesday night, bringing back its famed acrobatic combat scenes and martial arts-inspired sequences after a 20-month hiatus. The cast kicked off the combat with a processional throughout the property culminating in a pop-up performance in the MGM Grand lobby. Tickets for ongoing “KÀ” performances slated for 7 and 9:30 p.m. Saturday through Wednesday are available at cirquedusoleil.com/ka.

Blue Man Group celebrated its 30th anniversary of performances beginning in New York on November 17, a landmark for the quirky phenomenon that has become of the most successful off-Broadway productions in the country and around the world. In addition to its long-running Las Vegas Strip show at Luxor, Blue Man Group maintains ongoing shows in New York, Boston, Chicago and Berlin as well as national and world tours. Since its debut at Astor Place Theatre in New York City, these unique artists have shared more than 43,000 Twinkies with audience members in the Big Apple alone, and the different productions have entertained nearly 50 million people in more than 15 countries. The company has performed more than 11,000 shows in Las Vegas since opening at Luxor in 2000 and bouncing around a few different properties on the Strip.

Another familiar headlining show at Luxor celebrated an anniversary this week. Fellow performers Penn & Teller, Terry Fator, Piff the Magic Dragon, Blue Man Group and Tape Face banded together to create a celebration video for Carrot Top’s 16th anniversary at the pyramid-shaped casino resort. “When I started touring at the beginning of my career, I had two trunks and a strobe light,” Carrot Top said in a statement. “Now, here I am, celebrating 16 years at the Luxor with some of my best friends, who all came together to help me forever memorialize this anniversary.” Just across from the BMG theater, Carrot Top performs at the Atrium Showroom at 8 p.m. Monday through Saturday.

The one and only Lance Burton will perform again in Las Vegas this week to benefit Opportunity Village and Variety Children’s Charity of Southern Nevada. The master magician and some talented friends will perform at the OV Event Center at the Oakey campus on November 27 at 6:30 p.m. and tickets are available at opportunityvillage.org.