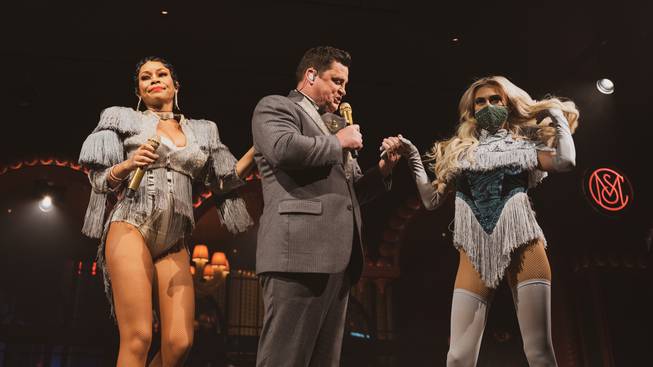 New sights and sounds are coming to Mayfair Supper Club.

With two seminal Strip productions returning to the same stage tonight — “Legends in Concert” and “Purple Reign” at the Legends in Concert Theater at Tropicana — it seems like a good time to take stock of which Las Vegas shows are open right now. Smaller theaters and showrooms that haven’t yet returned to some form of performance are likely to do so after June 1, and many of the city’s larger entertainment venues are planning to come back to life in July. Here’s the show roster running right now: The new “27 – A Musical Adventure” at Virgin; “Absinthe” at Caesars Palace; “Atomic Saloon show” at the Grand Canal Shoppes at Venetian; “The Australian Bee Gees show” and “Thunder From Down Under” at Excalibur; Carrot Top and “Fantasy” at Luxor; David Copperfield and the Jabbawockeez at MGM Grand; “Extravaganza” at Bally’s; “The Magic of Jen Kramer” and “Soul of Motown” at Westgate; “Mat Franco – Magic Reinvented Nightly” at the Linq; “MJ Live” at the Strat; “Murray the Magician” at Tropicana; Penn & Teller at the Rio; Tape Face and “X Country” at Harrah’s; “V – The Ultimate Variety show” and a variety of other productions at the V Theater at the Miracle Mile Shops at Planet Hollywood; and “X Burlesque” and “Piff the Magic Dragon” at Flamingo. The next big reopening that we know of is Blue Man Group at Luxor on June 24, but don’t be surprised if other shows pop open again within the coming weeks.

Entertainment is ramping up in a big way at Westgate. Kramer and “Soul of Motown” are running steady at the Westgate Cabaret, there are summer dates for Merrill Osmond and the King of Las Vegas Festival spotlighting the legacy of Elvis Presley, and Barry Manilow will return to the International Theater in September. And next week, a special evening of music to support the Victoria’s Voice Foundation will bring some familiar names to the Manilow room. “Music For Life” will bring in AJ McLean of the Backstreet Boys, Jeff Timmons of 98 Degrees, Chris Kirkpatrick of N’SYNC, “The Voice” competitor Chris Blue and more for a live spectacular on June 5 at 7 p.m. Proceeds and donations from the show will assist the foundation’s efforts to fight the national opioid crisis and you can find more information about that mission at victoriasvoice.foundation.

“Mayfair After Dark,” the later nightlife experience at Mayfair Supper Club at Bellagio, is back in action just in time for Memorial Day weekend. The clubby soiree that blends live music and performances with a special small-late menu and bottle service resumes Fridays and Saturdays starting at 11 p.m. Mayfair’s dinner shows are also seeing some new additions including different acts and costumes and a new singer, Stephani Parker, joining the eclectic and talented cast. The restaurant and entertainment venue is open for normal operations Sunday, Wednesday and Thursday from 5 until 10 p.m. and Friday and Saturday from 5 until 11 p.m.

The “All Motown” tribute show at the Alexis Park Resort is taking things up a notch for the holiday weekend with limited performances of “All Motown: Sunset” on the resort’s rooftop terrace at 7:30 p.m. Thursday through Sunday. The show has been selling out performances since debuting in March and tickets and info can be found at ticketkite.com.

Field Trip, an open-air concert spotlighting local R&B, hip-hop and indie-pop artists, will be held on Saturday at 8 p.m. at Fergusons Downtown, the restored and renovated former motel space on East Fremont Street. The performance lineup includes the Lique, B. Rose, Papichuloteej, LinaDrae and DJ Wizdumb. Food from Yukon Pizza, Phytos Vegan Eats and This Mama’s House — all tenants at the Vegas Test Kitchen next door — will be available onsite.

Interactive dinner show “Marriage Can Be Murder” is back downtown at Hennessey’s Tavern for pop-up performances this weekend at 7 p.m. Saturday and Sunday. The bar is at the eastern end of the Fremont Street Experience and the show offers four meal options along with the opportunity to play detective in this comedic presentation. Tickets are available at ivorystar.com.

Comedian and TV host Daniel Tosh has signed up for another Vegas performance, this one coming on August 14 ahead of his recently announced Aces of Comedy dates at the Mirage. It’s also at a different MGM Resorts venue, Cirque du Soleil’s KÁ Theatre at MGM Grand. Tickets start at $59.99 and will go on sale Friday at mgmgrand.com. Tosh will resume his Aces gigs at the Theatre at the Mirage on September 24 and 25. No official announcement has been made regarding the return of “KÁ” to the 2,000-seat space at MGM Grand but it’s expected to be back in September or October.

As reported right here in Curtain Up last week, live music is finally returning to the outdoor stages along the Fremont Street Experience in downtown Las Vegas starting on June 1. In fact, all three stages will get going at 12:01 a.m. on June 1 and keep the music coming until 4 a.m. On the Main Street Stage, Crush, Spandex Nation and different dancing DJs will be performing; Alter Ego takes over on the 1st Street Stage; and the Tony Marques Band and Zowie Bowie will play the 3rd Street Stage. Free nightly entertainment will continue through the year and more info is available at vegasexperience.com.