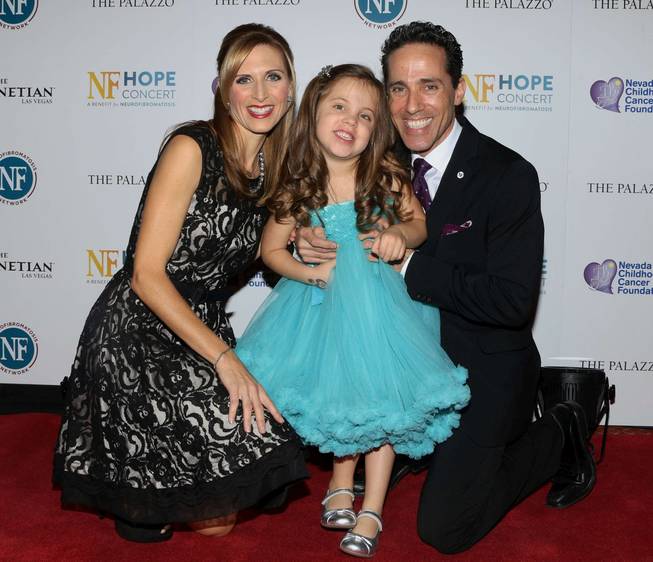 Former “Jersey Boys” star Jeff Leibow has found a way to continue his annual NF Hope Concert to raise awareness of neurofibromatosis during COVID times, broadcasting the Las Vegas version of the show for free on Sunday, October 18, from 5 to 7 p.m. on YouTube and Facebook. Performers include Clint Holmes, Ashley Fuller, John Bayless, Daniel Emmet, Elly Brown and of course Leibow and his wife, Melody, and Chet Buchanan will host for the fourth year.

Leibow has considerable experience going the livestream route from the past seven months as the multitalented entertainer already took the New York and Chicago editions of NF Hope to the virtual world.

“After the success we had in the spring, I actually started working as a producer and director for virtual events and was hired by a number of groups who were all trying to figure out how to navigate these strange waters,” said Leibow, a Las Vegas resident since “Jersey Boys” opened at Palazzo in 2008. “I guess I’ve always been a technology geek, but really … it’s just been nice to keep going. That’s what drove all performers to find some virtual version of what they do, to not have to sit and be stagnant.”

Viewers for Sunday’s show can also upgrade their experience with special watch party packages that include dinner delivered by a popular local restaurant with proceeds benefitting the Neurofibromatosis Network, an organization assisting families and individuals battling the genetic disorder of the nervous system. Leibow’s daughter Emma was diagnosed with NF at 9 months old.

The show definitely needed to go on in 2020, the 10th year of the concert. It’s likely Sunday night will also push the event over the line of $1 million raised for the cause.

“It’s a huge milestone for us,” Leibow said. “The first year we did this I assumed it would be a one-off, and then as we were packing up the auction, somebody said, ‘When is the next one?’ That was the first time I thought, what happens if this continues? Never in my wildest dreams did I think we’d be here, and now it makes me dream bigger.”

For more information about the show and the cause, visit nfhope.org.

Since Vegas has seen several announcements for reopening shows this week, let’s do a quick recap of what’s coming back to Strip stages soon: “X Country” reopens at Harrah’s on October 22; “Absinthe” reopens at Caesars Palace on October 28; and Piff the Magic Dragon reopens at Flamingo on October 29. As of press time, Curtain Up was waiting for information from MGM Resorts properties, specifically Excalibur and Luxor, concerning more shows that could reopen in early November.

Piff’s comeback sets a precedent as his intimate magic and comedy production will move to the 700-seat Flamingo Showroom from the 200-seat Piff the Magic Dragon Theatre at Bugsy’s Cabaret. The larger space will host audiences of 250 or less when he takes the stage. Expect to see more Strip acts moving into more convenient and regulation-friendly venues in the coming weeks and months, especially within casino resort properties that have such flexibility. Here’s an example we’ve already seen this week: the Bronx Wanderers, the awesome band that had been playing Harrah’s Showroom, recently performed at the outdoor Carnaval Court bar.

Stand-up comedy was thought to be one style of live entertainment that could return quickly, easily and safely, but some comedy venues are struggling to work around the somewhat controversial 25-foot rule that mandates said distance between stage and audience. Several Vegas producers have indicated they expect that restriction will be changed or removed soon, especially considering the pre-existing rules for “ambient” music or entertainment in bars, lounges and restaurants doesn’t separate performers from audience members at such a significant distance. Still, there are jokes, most notably at the STRAT’s L.A. Comedy Club, which is putting on three live shows every night starting at 6 p.m. in the Dragon Room on the second floor. Downtown Grand’s Delirious Comedy Club is also back in action with 8 and 10 p.m. shows Thursday through Sunday at the Fremont Room.

Could outdoor comedy become a thing? It could at Wynn, where big-name jokester Sebastian Maniscalco performed on Friday in a special engagement dubbed “Laughter Under the Stars” at the resort’s new 40,000-square-foot open-air Event Pavilion. The audience numbered around 150 and the resort installed an additional thermal temperature check point at the entrance.

Back in the virtual world, Cirque du Soleil has unveiled new fall programming and a different look for its CirqueConnect content hub. Never-before-seen series and exclusive content from Cirque’s various international shows has been the name of the game here and now the more mobile-friendly site contains the first episode of “CirqueClass,” featuring writer and director Michael Laprise. The series will continue as an exploration of the creative process through the eyes of the artists themselves. Also available are “Cirque Up!” where kids can learn the tricks of the clowning trade, new “Cirque Me Out” fitness classes and more.