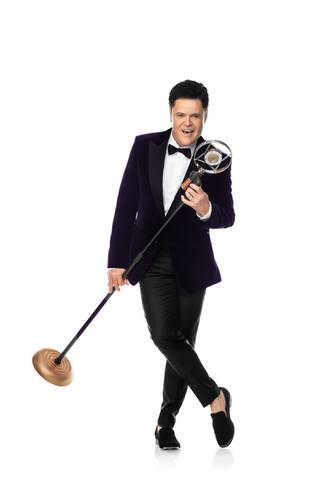 Donny Osmond’s new residency show will look back at his long and varied career.

When Donny Osmond says his return to a headlining gig on the Las Vegas Strip feels like coming home, he means it.

Officially announced today, the entertainer will reunite with Caesars Entertainment for a solo residency at Harrah’s Las Vegas opening on August 31, 2021. It was one year ago now when Osmond and his sister Marie put the finishing touches on an 11-year run at Flamingo Las Vegas.

“It’s kind of interesting because when I was about 6 or 7 years old, I was the first act, with my brothers, to open Harrah’s in Tahoe. We were opening for Phyllis Diller,” he says. “Here I am all these years later back at Harrah’s, so really, I am home.”

Throughout his career as a solo artist or singing with his sister or brothers — not to mention an actor on stage and screen, a talk show and variety show host and a best-selling author — Osmond has tallied 33 gold records and sold more than 100 million albums. In recent years he’s been writing and recording for a mindboggling 63rd album, a work that ended up inspiring the idea for his new Vegas show.

Tickets will go on sale Tuesday, November 24, for his first round of shows at Harrah’s Showroom, stretching from August 31 through November 20. If the record-breaking sales of the Donny & Marie residency are any indication, another hit show is on the way.

“Donny Osmond has achieved a lifetime of remarkable milestones as an entertainer, including countless memories with us,” said Caesars Entertainment Regional President Gary Selesner. “We’re thrilled to welcome him to the stage at Harrah’s next summer for an all-new show, and we look forward to sharing many more unforgettable moments with our guests and one of music’s most beloved stars.”

Here’s the rest of my conversation with Osmond on Thursday when he arrived at Harrah’s Las Vegas:

Was this new residency in the works from the time the Flamingo show ended?

Right at the very end, [director] Raj Kapoor came to see the show. He is the go-to guy if you really want an amazing show. He’s done all the awards shows, he did the Backstreet Boys show. So afterwards he was backstage with me and my manager Jim Morey and I played him some of my new album, which I’ve been working on for several years now and it’s almost ready. I played some stuff and he said, “Donny, this is more than an album, this is a show.” I said, “What do you mean?” He envisioned doing a show about my entire life and presenting this new music. And right after the first of the year, we approached Caesars and said, “What do you think?” because Vegas is pretty much my home and I know them like family. And in the last three months, negotiations got very serious, and we signed the deal on Saturday. They said they wanted to announce the show now and were very excited about it, and I said, “I’ll be on a plane, let’s get it done.”

Even though this show doesn’t open for nine months, there’s something exciting about making the announcement now heading into the holiday season.

I live in an optimistic world. With all these restrictions right now, I honestly believe Vegas is going to explode with enthusiasm [next year]. Everybody is so sick and tired of being cooped up. This has been the toughest thing on Vegas and you watch, Vegas is going to rebound bigger than ever. And I’m very honored to be part of that wave, one of the first to be announced in a big way right now and help bring some life back into this city. It’s almost turned into a cliché when people say “Vegas Strong,” but it’s real. 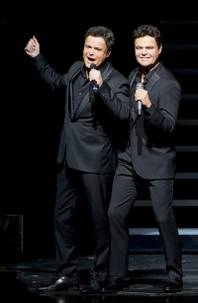 Donny Osmond, left, poses by a Madame Tussauds wax figure of himself as Donny and Marie wax figures are unveiled during Donny & Marie show at the Flamingo Tuesday, Feb. 9, 2016. The figures will be permanently on display inside Madame Tussauds Las Vegas located in the Venetian.

Is there something about the music on the album that inspired the career retrospective approach you’re taking with the new show?

It’s not a chronological type of album going back through my career. This is all new material, but the people I’ve been working with — writers who have worked with Bruno Mars and Ed Sheeran, grabbing people from all over the world and doing sessions — it’s the best of the best. I’ve written maybe 40 or 50 songs for this record and I’ll use the best 10 or 12. I wish I could release it now. It was the music Raj listened to that got him interested in my six decades of show business and what we can do onstage with all this new music and all the hits of the past.

No one else has had a career like yours. You’ve bounced between performing by yourself and with your family for your entire life. So what is it like creating a show that looks back in that way?

What Marie and I did together with the Flamingo, I think a lot of that magic between the two of us has to do with being siblings. This show is not a rehash of that, it’s something completely different. It encompasses the whole six decades. In fact, there’s something I’ve been working since we closed that show, something I’ve felt I have to do somehow but I think I’ve figured it out. The challenge is that I have kids and young people that know me from “The Masked Singer” or “Mulan” or “Dancing With the Stars.” It’s amazing how many younger people know who I am. So how do I satisfy that demographic and the “Puppy Lovers” [older fans]. So I came up with this concept where at some point during the show, we shut it down, the band and I come to the edge of the stage and it’s almost like a Q&A. And there’s this huge screen on the stage with all 63 albums on it, and someone [in the audience] says, “I remember that song right there,” and do the song, no matter what they choose. We have it ready to go with every single one of them, and maybe we only do 20 or 30 seconds of it, but that way we get through this big swath of music.

That’s a huge challenge. That’s a lot of songs!

It is, and a lot of different types of music. But I think I figured it out because my goal is I want each audience member to leave the show saying, “I heard what I wanted to hear, and I saw what I came to see.”

In my opinion, that approach is what separates the truly successful Las Vegas residencies from the rest. The shows that really resonate are the ones where the artist is all about satisfying the audience, they know how to do it and they do it.

It seems so simple, that philosophy you just said, but a lot of people don’t do it. Sometimes you get onstage and you’re in your own little world, and I appreciate that because I do it as well. When I did “Joseph and the Amazing Technicolor Dreamcoat,” the late Steven Pimlott was the director, a great Shakespearean director. He told me something on day one of rehearsals that changed my entire approach to show business: “The theater is a place where people come to dream in public, and you’re in charge of that dream.” That’s a huge responsibility, but of course it’s so obvious. He also said, “You’ve been trained all your life to get onstage and turn it on.” And I said, that’s my job, people buy a ticket to be entertained and that’s my job. He said, “Nope. You got it backwards. Your job is to get up there and have a great time and let them peek into your world. If you have fun, they’ll have fun.” But there’s a balance there. Yes, you’re in your own little world, but you’ve invited these people in and you’ve got to have a reciprocal relationship.