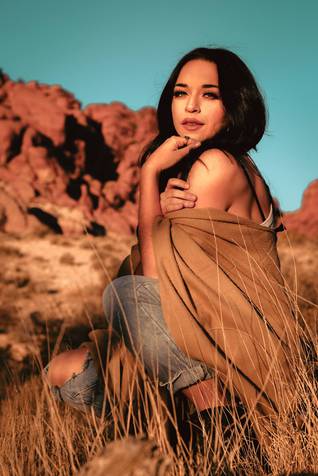 Vegas-born dancer Shelby Jordan is keeping busy these days with performances at Harrah’s and the Strat.

Powered by talented celebrity superstar impersonators, the musical tribute show is a staple across the Las Vegas live entertainment landscape. “MJ Live,” the award-winning tribute show at the Strat, reopened on March 18 after enduring a second closure due to COVID restrictions. This show is considered one of the top tributes on the Strip thanks in part to a live band that injects extra energy into classic material from the King of Pop.

It’s also one of the reasons why Shelby Jordan, a dancer in the “MJ Live” cast for nearly five years, appreciates the show.

“Dancing to live music really adds to the energy of performing and everyone in the cast working together to make this cohesive thing,” she says on the latest episode of the Sun on the Strip podcast. “And in ‘X Country,’ we [the dancers] are the main focus. It’s a smaller cast, more intimate, a different vibe. When you’re the focus, that’s kind of a lot sometimes, so sometimes it’s easier to sort of share the show.”

That’s right, Jordan is currently onstage in two different shows on the Strip. She also performs in the burlesque “X Country” at Harrah’s, which was the first casino show to reopen during the pandemic, back in October.

“It was so nice being back because I was off for eight months and I was doing these odd jobs, and all that time all I wanted to do was have my regular job back,” Jordan says. “And then coming back was super nice but a huge adjustment. The people in the audience were so far away and you could only see their eyes, so even if they were smiling, we can’t see it. It’s hard to gauge how much they liked the show.”

Both shows are being performed with limited capacity audiences, but both are routinely selling out multiple performances every week and Jordan says it’s easier to see how much audiences are appreciating the opportunity to be entertained once again.

While she’s glad the biggest challenges of the past year appear to be in the rearview mirror, Jordan learned a lot from the experience.

“Since there was not a lot to do, I started taking time to work on photography, since that’s something you could do safely from six feet away, and I kept running every day to stay in shape. When studios started to open, I continued to take dance classes and just found as many gigs as possible that were still in the realm,” she says. “It definitely made me feel like you need multiple outlets, not just dance, but a second or third or maybe fourth thing to be working on. That way you can latch on to another career at some point.”