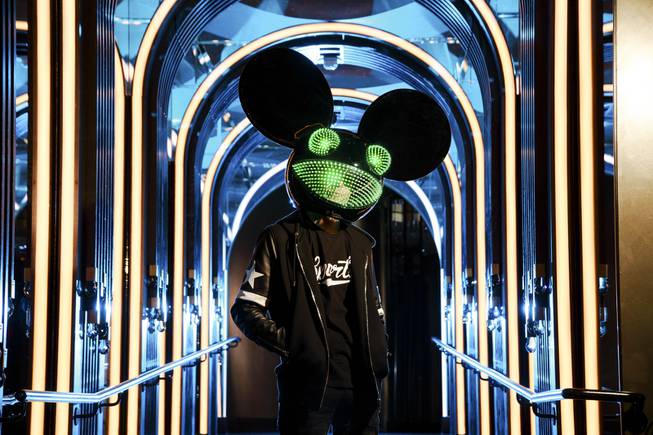 Insomniac was planning to open EDC this weekend but instead brings Deadmau5 to downtown Las Vegas.

Thanks to a burgeoning relationship with the gaming and hospitality company behind the D, Golden Gate and Circa resorts along Fremont Street, live entertainment producer Insomniac was able to quickly shift gears and create an electronic music event for the Downtown Las Vegas Events Center on May 21, the day its Electric Daisy Carnival was supposed to open.

Iconic electronic music producer Deadmau5 will perform Saturday at 8 p.m. with support from DJ acts Nero and No Mana at the DLVEC, the 120,000-square-foot outdoor venue located just south of the D. It will be the first live event there since the pandemic shuttered such venues last spring.

Insomniac was planning to present EDC 2021, the mega-festival that typically attracts hundreds of thousands of locals and tourists for three days and nights at the Las Vegas Motor Speedway, on May 21-23. But the festival was postponed for a third time last month, pushed to October 22-24.

“A few days after that [announcement], we were able to get some meetings going and start talking about what we could do at the events center,” says Derek Stevens, owner of the DLVEC as well as the aforementioned downtown casinos. “Initially our whole goal was to get Vegas back open again and we were able to get with various governing bodies and get support for doing something at a 10,000-person level. Once we felt comfortable we could do that, we reached out to [Insomniac] to move forward and coming off what happened with EDC, we quickly struck a deal and went fifty-fifty on it.”

The venue had teamed with Insomniac for several events in 2019 and the connection was still strong despite the pandemic, Stevens says. The partnerships has already resulted in another dance music event, Dreamstate with DJs Paul Oakenfold, Gareth Emery, Cosmic Gate and others set to take the stage on May 28. A different promoter, Factory 93, brings DJs Tino Gomez, Avision, Michael Bibi, TestPilot and Maceo Plex to the DLVEC this Sunday, May 22. The complete event calendar and ticket information can be found at dlvec.com.

“If you could look at July 1 through the end of the year, I think it’s going to be the busiest the events center has ever been,” Stevens says. “I think we have 12 or 13 straight weekends with multi-day events in late summer through the fall. There’s so much pent-up demand for entertainment and groups coming together and being outside. It’s been a long time and people are excited to get out there again.”

The DLVEC first opened in the fall of 2014 and has hosted seemingly every type of outdoor event imaginable, from Vegas Golden Knights watch parties to food festivals and concerts from every genre of music. In September, the annual Punk Rock Bowling festival will return to the venue for the fourth time, and the Reggae Rise Up festival is set for October.

This weekend marks not only the return of one of the city’s biggest outdoor event venues, but also one of downtown’s most important venues. Unlike the Strip, downtown casinos don’t all have multiple entertainment venues built into their properties.

“I think the events center is a great bump for downtown and a great thing for Vegas in general, and I’m biased toward outdoor venues, but for such a venue, I’m pretty proud of this one,” Stevens says.

His Circa resort, which opened in October, has already become known for its signature outdoor venue, the Stadium Swim pool complex.

As COVID restrictions have eased and allowed the return of more live entertainment events, Circa has been able to welcome more and more guests, bringing the vision of the first new ground-up casino in downtown Las Vegas closer to being fulfilled. On Friday, Stevens’ three casino properties received approval from the Nevada Gaming Control Board to move to 100% capacity.

“When that email went out [to the staff], it was euphoric,” he says.