People of all ages have flocked to the Luxor’s HyperX Esports Arena to watch and compete in a regional tournament for the iconic fighting game Super Smash Bros. Ultimate. Inside the 30,000-square-foot arena, commentators’ voices boom over the sound system as 50-foot LED screens capture every punch, kick and near-death collision, as Smash fans track every move.

Esports events like that get a gamer’s heart racing, and communities like this remind Jairo Urcuyo why he founded Las Vegas’ first official esports team in the first place.

“We [needed] something to support Vegas. There were other teams here in the past, but there was never a sense of family or a sense of community outreach,” says Urcuyo, who launched the Las Vegas Inferno in January 2020. “[Past players cared so much] about championships and being the next big thing in esports that they never gravitated toward an official home and supporting the local community.” 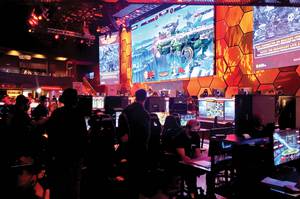 Inside the Luxor’s HyperX Esports Arena during the Super Smash Bros. Ultimate competition

The team competes in online tournaments in their games of choice, Rocket League, Fortnite and Halo, against opposing squads in the United States and beyond. Prize pools can run from $9,000 to $200,000 depending on the event, Urcuyo says.

The Inferno’s commitment to the community has led it to work with local businesses, charities and national nonprofits such as Susan G. Komen, the American Cancer Society and the Make-a-Wish Foundation. The team has also been a proponent of empowering and educating young gamers. With the creation of the Ignition Initiative program, the Inferno aims to teach young adults about financial education and planning—and also how to navigate a successful esports career.

Urcuyo says he hopes those endeavors will leave a lasting impression on the city. “We want to get as big as the Golden Knights, where we’re doing more things for the community, hosting events, giving back more,” he says. “I feel that we’re going in the right direction.”

Since the Inferno launched in 2020, it has grown into a group of 54 people, but only a portion of them actually compete professionally. “I don’t want to just be a competitive team,” Urcuyo says. “Esports has so many businesses built into one. You have content creation and streaming, merchandising, production, [and then] you have competitive teams.”

Working off of that mindset, Urcuyo has also developed relationships with sponsors and brand ambassadors such as Los Angeles Angels pitcher Matt Ramsey and professional mixed martial artist Erick “The Ghost Pepper” Gonzalez.

It might seem counterintuitive to develop a following online before real life, but it has brought leading esports organizations Vegas notoriety. FaZe Clan, for example, recently held a Summer Tip-Off gaming event at Resorts World, complete with a headlining show from Grammy-nominated rapper Jack Harlow.

Briana Mercado and Victor Luu are two of many content creators representing the Las Vegas Inferno. Mercado started out streaming other activities, but followers quickly convinced her to get onto the gaming side. In her four years of streaming, she has gone from borrowing her brother’s equipment to building a custom PC, on which she plays the competitive first-person shooter Call of Duty.

To Mercado, “streaming isn’t a job, it’s a lifestyle.” Luu adds, “I have all the support to continue doing it.”

Esports is an evolving, billion-dollar business. Inferno general manager Leo Martinez has seen the changing tides throughout the years, from failed businesses to ambitious upstarts revving up the industry here. An official team provides more ownership—and more pride within the community.

With that comes recognition, and, Martinez hopes, Vegas becoming the esports town for which it has been aiming for years. “We’re here, and we’re here to stay,” he says. “Everyone’s gonna know our name.”