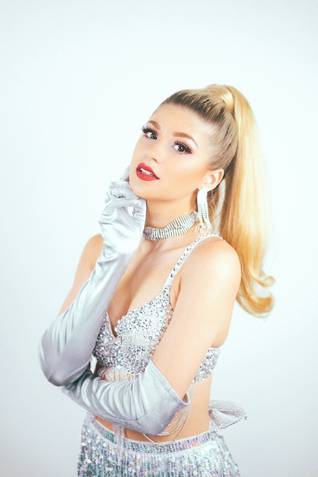 Katie Marie Jones performed her first solo show in Las Vegas this month at the Space.

Vegas Golden Knights fans are already familiar with the face, voice and style of Katie Marie Jones, one of the in-arena hosts during hockey games at T-Mobile Arena. But the born-and-raised native is a born entertainer, having performed in musicals and other theatrical productions in Las Vegas and across the country for years, and she can also be seen onstage in the “Nathan Burton Comedy Magic” show at the V Theater at the Miracle Shops at Planet Hollywood.

October has been a huge month for Jones. She welcomed VGK fans back to the Fortress at the home opener on October 12 before performing her first solo show in Las Vegas at the Space the very next night.

“I don’t know what possessed me to put my show the day after opening night for the Golden Knights, but I did and I’m still sleeping from it,” she says on this week’s Sun on the Strip. “But it was also the best week of my life. We finally were able to be back in the stands with fans and doing interviews with players and all that stuff, and it’s been a long two seasons of not doing that. And the day after, I got to just play and put all my favorite songs into one show and it was an incredible night.”

Jones started the hockey hosting gig at about the same time she joined Burton’s magic show about three years ago, and both Vegas jobs are nothing like what she envisioned for her career in entertainment.

“[Magic] is such a different experience because there are so many things that can go wrong at any moment and you have to know how to figure it out and make it look like everything went according to plan,” she says. “It’s been so much fun and I’ve learned so much about myself and other types of performance. Learning all these different things in sports, magic, dance and other avenues have made me a lot more well-rounded.”

Both roles will keep her very busy for the immediate future, but Jones is also finding time to continue her develop her solo show and take advantage of other opportunities to perform.

“I wanted to put together a show that showed every side of me, not just musical theater or jazz or pop,” she says. “It’s still a work in progress and I’ve already changed things since the show [at the Space]. … That’s where my heart is, on the stage and in the theater, and I think this coming year, that’s going to be where my focus is.”