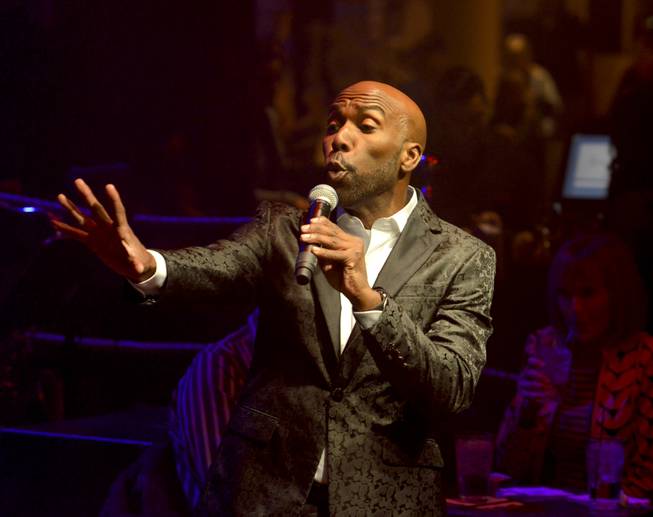 Eric Jordan Young is back onstage this weekend at the new Vegas Room.

This weekend brings the official opening of a new dining and entertainment venue just east of the Strip in the historic Commercial Center on Sahara Avenue. It’s called the Vegas Room and it has chosen the supremely talented Eric Jordan Young to take the stage to kick things off.

His Saturday show just sold out and there are limited seats available for the Friday night performance. A veteran Vegas performer who’s played everywhere from the Strip to the Smith Center and taken the stage in “Cocktail Cabaret,” “Rock of Ages,” “Shakin’,” “Vegas! The show” and more, Young is a versatile song and dance man who will be performing live in front of an audience for the first time since the shutdown.

“This is my first one back and I would be crazy to say that I’m not conscious of being in the room during this time of COVID-19, but they are taking every precaution they can,” he says. “When I walked in [for rehearsal] it is clear they are putting their patrons’ safety and concerns first. 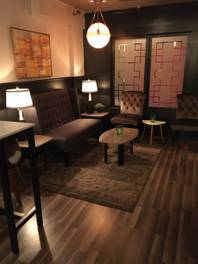 A lounge space at the Vegas Room.

“I have a lot of friends saying, ‘Please be careful,’ and ‘Make sure you’re not jumping into the pool too quickly,’ and I’m taking that to heart and doing everything I can to keep myself safe and everyone else safe. But we do need these things, and for me personally, I just need to sing right now.”

Young will perform two sets accompanied by renowned pianist Philip Fortenberry, the first a collection of Burt Bacharach tunes and the second a blend of standards and favorites from musical theater, plus pop and soul hits.

Las Vegas production shows and big-room headliners are still not allowed to perform under the current Phase Two guidelines governing casino operations and public gatherings. The Vegas Room, which started as a catering operation last year servicing special events including some at the Mob Museum, is able to present live entertainment because it’s operating as a restaurant. Those attending this weekend’s shows are making reservations and paying for special dinner packages.

Co-owner Tom Michel said the supper club business model became a big part of the venue’s plan long before the pandemic restricted what type of venues would close and gradually reopen.

“We started the catering business last year but so many people came to our space and told us we really have something special here,” he said. “So our business model shifted. And I believe now that this is what we were destined to do because it’s this amazing confluence of all the things we are good at and that we love.”

Michel is a pianist and former performer who operated a catering business in New York’s Hudson Valley for a decade after a career in marketing for television and theater. His business partner David Robinson is the chef at the Vegas Room and its parent company Las Vegas Fine Catering and Events, a former cabaret performer who attended the Culinary Institute in Hyde Park, New York.

Broadway actor and singer Brent Barrett, who was the Vegas Room’s first performer at a private event before the shutdown, serves as the entertainment director. He’ll perform there again later this month, but after Young’s Friday and Saturday shows, the Vegas Room will host Sunday brunch with jazz singer Amanda King and Mayfair Supper Club pianist Patrick Hogan on June 21 and every Sunday through July. Powerhouse singer Anne Martinez takes over June 26 and 27 and another stage superstar, Randal Keith, is on the docket for July 3 and 4. For more information or to make reservations, visit thevegasroom.com.

The venue would normally hold an audience of around 90 but under current physical distancing and capacity requirements, it will host a little more than 40.

“It’s very intimate and that intimacy is what people love so much about it,” Michel said. “We’re a listening room. We respect the performers and that resonates deeply with our performers and guests. I have some friends that have lived here for a long time who came to see Brent back in March and they’ve said this is like those supper clubs of the past in Las Vegas that we don’t have any more. There’s great food and a clubby, warm feeling.”

The Vegas Room was already on track to becoming a fascinating new locals-oriented venue and an alternative to big Strip entertainment. Under the strange and restrictive circumstances of the current state of live entertainment, its plans are even more intriguing.

“I think people want to see live entertainment and have it be a full evening experience as opposed to going to see something for 75 minutes or 90 minutes,” said Young. “It’s going to be something to be able to come to dinner, sit down and have a conversation with friends over drinks and see a performance, and then return to Vegas cocktails and conversation and then another set. It’s very possible this could me something that is supported and takes off.

“But I’ve been in the industry for quite some time now and one thing I have stopped doing is trying to predict what is next. The people will tell you. The people let you know what they want.”