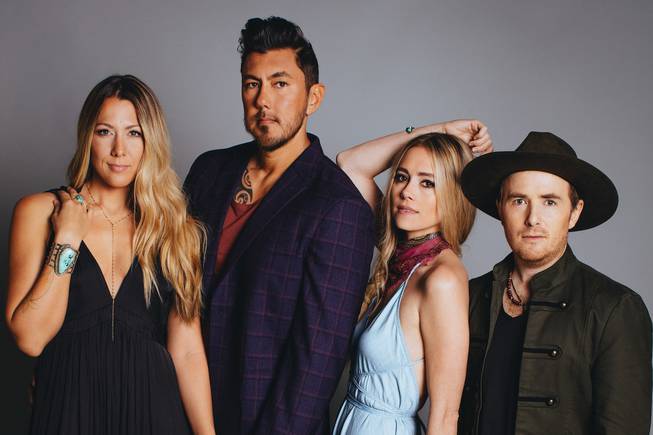 Country legend George Strait’s ongoing concert series at T-Mobile Arena has brought several superstar and up-and-coming country acts to the Strip as openers. Among the supporting artists are Kacey Musgraves in 2017, Lyle Lovett and Robert Earl Keen in 2018 and Ashley McBryde last year.

“Strait to Vegas” is back this weekend with country-pop singer-songwriter supergroup Gone West, formed two years ago by Colbie Caillat and her fiancée Justin Kawika Young and Jason Reeves and his wife Nelly Joy.

“We’re freaking out a little bit,” Caillat says about the Strait gigs. “Nelly is the most excited because she’s a huge George Strait fan and she’s from the same town.”

The roots of Gone West go back about 14 years, when Caillat — the California-born singer and songwriter whose father co-produced Fleetwood Mac’s “Rumours” album and who broke through with her debut single “Bubbly” in 2008 — wrote her first album and became friends with Reeves, an Iowa-born writer, singer and guitarist who has also worked with Lanco, Kenny Rogers and others.

“I met Justin and we became friends, he joined my band and we toured together for years, and during that time Jason and Nelly met during a writing session in Nashville and over time fell in love and got married,” Caillat says. “We’ve become this group of friends making music and touring together, and a few years ago we did a tour for my album and that was the first spark for this. We just started talking about, should we call this a band?”

“I think what’s great is we all different strengths we contribute that come at different times when needed, and we’re all writing and recording and producing all these songs together,” Caillat says. “Justin and Jason both play many instruments but they’re both insane guitar players, and they have different styles. There are so many different elements and that’s what makes it more fun and creative.”

The individual artists have put their own projects on hold, making Gone West and its upcoming full-length album the top priority. That record is expected in May, but the foursome has been touring steadily for a year now.

“I think it’s more fun playing shows now with all my friends onstage,” says Reeves. “It feels a lot less scary getting up there with them than by yourself. All of us have done so many shows by ourselves but I’ve never had as much fun as I do playing with this band.”

They’re also clearly enjoying writing music together, an organic process that doesn’t have to focus on creating a new identity of sound.

“I think the fact that all four of us are singing and writing and playing on these songs makes it sound different naturally,” Reeves says. “I’ve never made records with four singers before and it’s really cool having that many voices. We’re not that different from each other musically but we each have our own thing and it’s really fun trying to put all those elements together and really, that’s what I love about it.”