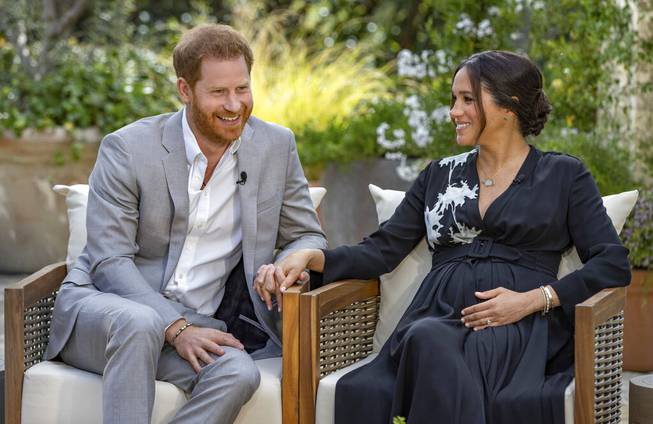 This image provided by Harpo Productions shows Prince Harry, left, and Meghan, Duchess of Sussex, speaking about expecting their second child during an interview with Oprah Winfrey. “Oprah with Meghan and Harry: A CBS Primetime Special” airs March 7 as a two-hour exclusive primetime special on the CBS Television Network.

LONDON — Prince Harry and Meghan’s explosive TV interview divided people around the world on Monday, rocking an institution that is struggling to modernize with claims of racism and callousness toward a woman struggling with suicidal thoughts.

During the two-hour appearance with Oprah Winfrey, Harry also revealed the problems had ruptured relations with his father, Prince Charles, and brother, Prince William, illuminating the depth of the family divisions that led the couple to step away from royal duties and move to California last year.

The palace has not yet responded to the interview, in which Meghan described feeling so isolated and miserable inside the royal family that she had suicidal thoughts and said a member of the family had “concerns” about the color of her unborn child’s skin.

The family member was not Queen Elizabeth II or Prince Philip, according to Harry, sparking a flurry of speculation about who it could be.

Leaders around the world were asked about the interview, and citizens of many countries had an opinion.

In Accra, Ghana, Devinia Cudjoe said that hearing that a member of the royal family was worried about the color of the skin of an unborn child was insulting to people of the Commonwealth, the grouping of Britain and its former colonies that is headed by the queen.

“That is pure racism,’’ Cudjoe said. “(The) Commonwealth is supposed to foster unity, oneness amongst black people, amongst white people. But if we are hearing things like this … I think that is below the belt.”

In Nairobi, Kenya, Rebecca Wangare called Meghan “a 21st- century icon of a strong woman. She has faced racism head-on.”

Asma Sultan, a journalist in Karachi, Pakistan, said the interview “is going to tarnish the image of the royal family.”

“There is so much controversy ever since Diana’s death, so it is new Pandora box which is opened up,” she said.

British Prime Minister Boris Johnson refused to comment on the interview, praising the queen but saying that “when it comes to matters to do with the royal family the right thing for a prime minister to say is nothing.”

Asked whether U.S. President Joe Biden and his wife Jill had any reaction to the interview, White House spokeswoman Jen Psaki said Meghan’s decision to speak about her struggles with mental health “takes courage” and “that’s certainly something the president believes in.”

But she said she wouldn’t offer additional comment on the situation “given these are private citizens, sharing their own story and their own struggles.”

Former Australian Prime Minister Malcolm Turnbull said the interview bolstered his argument for Australia severing its constitutional ties to the British monarchy. Turnbull met the couple in April 2018, four months before he was replaced by current Prime Minister Scott Morrison in an internal power struggle within the conservative government.

“It’s clearly an unhappy family, or at least Meghan and Harry are unhappy. It seems very sad,” Turnbull told Australian Broadcasting Corp. “After the end of the queen’s reign, that is the time for us to say: OK, we’ve passed that watershed. Do we really want to have whoever happens to be the head of state, the king or queen of the U.K., automatically our head of state?”

Britain’s monarch is Australia’s head of state. Turnbull was a leading advocate for Australia selecting an Australian citizen as its head of state when he was chairman of the Australian Republican Movement from 1993 to 2000.

News of the interview was reported in Chinese state media, including the overseas edition of the ruling Communist Party’s flagship newspaper, People’s Daily, and was widely discussed on the popular Weibo social media platform.

The allegations are especially damaging because many observers hoped Harry and Meghan, who is biracial, would help the tradition-bound monarchy relate to an increasingly multicultural nation. In the early days of their marriage, Harry and Meghan joined William and his wife, Catherine, in projecting a glamorous, energetic image for the young royals.

That partnership was severed when Harry and Meghan left the country, saying they wanted to earn their own living and escape what they called intrusive, racist coverage by the British media.

But the interview brought that criticism into the palace itself, with the couple directing allegations of racism at an unidentified member of the royal family.

Meghan said that when she was pregnant with her son, Archie, Harry told her that the royal family had had “concerns and conversations about how dark his skin might be when he’s born.”

Harry confirmed the conversation, saying: “I was a bit shocked.” He said he wouldn’t reveal who made the comment. Winfrey later said Harry told her the comment didn’t come from Queen Elizabeth II or Prince Philip, his grandparents.

Meghan, 39, acknowledged she was naive at the start of her relationship with Harry and unprepared for the strictures of royal life. A successful actress before her marriage, she said she bridled at the controlling nature of being royal, squirming at the idea that she had to live on terms set by palace staff. This was compounded by the fact that the staff refused to help her when she faced racist attacks from the media and internet trolls, she said.

The situation became so difficult that at one point, “I just didn’t want to be alive anymore,” Meghan told Winfrey.

But when she sought help through the palace’s human resources department, she was told there was nothing it could do because she wasn’t an employee, Meghan said.

The implications for the interview — which was broadcast Sunday evening in the United States and will air in Britain on Monday night — are only beginning to be understood. Emily Nash, royal editor at Hello! Magazine, said the revelations had left her and many other viewers “shell-shocked.”

“I don’t see how the palace can ignore these allegations, they’re incredibly serious,” she said. “You have the racism allegations. Then you also have the claim that Meghan was not supported, and she sought help even from the HR team within the household and was told that she couldn’t seek help.”

The younger royals have made campaigning for support and awareness around mental health one of their priorities. But Harry said the royal family was completely unable to offer that support to its own members.

“For the family, they very much have this mentality of ‘This is just how it is, this is how it’s meant to be, you can’t change it, we’ve all been through it,’” Harry said.

The couple had faced severe criticism in the United Kingdom before the interview. Prince Philip, 99, is in a London hospital recovering from a heart procedure, and critics saw the decision to go forward as being a burden on the queen — even though CBS, rather than Harry and Meghan, dictated the timing of the broadcast.

In the United States, sympathy for the couple poured in. Tennis star Serena Williams, a friend who attended Harry and Meghan’s wedding, said on Twitter that the duchess’s words “illustrate the pain and cruelty she’s experienced.”

“The mental health consequences of systemic oppression and victimization are devastating, isolating and all too often lethal,” Williams added.

Britain could be less forgiving once the full interview is broadcast, since some see the pair as putting personal happiness ahead of public duty.

Meghan — then known as Meghan Markle, who had starred on the American TV legal drama “Suits” — married Harry at Windsor Castle in May 2018.

But even that was not what it seemed: The couple revealed in the interview that they exchanged vows in front of Archbishop of Canterbury Justin Welby three days before their spectacular wedding ceremony at the castle.

Archie was born the following year and in a rare positive moment in the interview, the couple revealed their second child, due in the summer, would be a girl.

Harry said he had lived in fear of a repeat of the fate of his mother, Princess Diana, who was covered constantly by the press and died in a car crash in Paris in 1997 while being pursued by paparazzi.

“What I was seeing was history repeating itself, but definitely far more dangerous — because then you add race in, and you add social media in,” Harry said.

Both Meghan and Harry praised the support they had received from the monarch.

“The queen has always been wonderful to me,” Meghan said.

But Harry revealed he currently has a poor relationship with William and said things got so bad with his father that at one point Prince Charles stopped taking his calls.

“There is a lot to work through there,” Harry said of his father. “I feel really let down. He’s been through something similar. He knows what pain feels like. And Archie is his grandson. I will always love him, but there is a lot of hurt that has happened.”