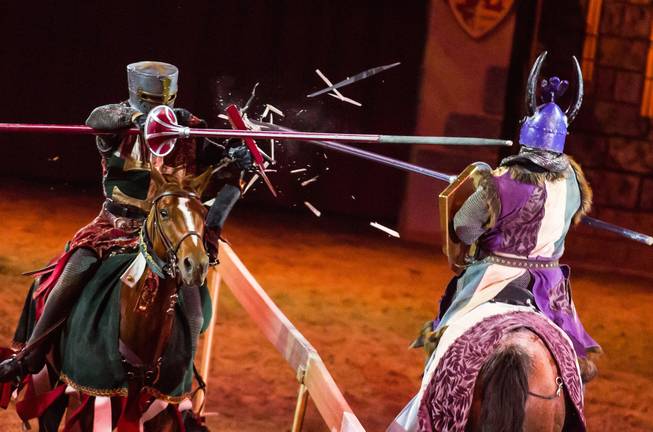 Prepare for battle when you see Tournament of Kings.

Jousting, sword fights and an attack from an evil wizard may not spring to mind when you think of a dinner show in Las Vegas. But “Tournament of Kings” at Excalibur is the Strip’s longest-running dinner show, serving up Cornish game hens along with all that medieval action since the castle-themed casino and hotel first opened in 1990.

The unique show will be performed tonight for the first time since last March, returning to its 900-seat arena-style showroom at 6 p.m. and its 10-show weekly schedule, running six nights a week.

“When we want back in to get ready to start rehearsals, the showroom looked kind of like if you excavated a tomb in Egypt, because it’s all dirt. It hadn’t been touched. There were no footprints anywhere,” said Phil Shelburne, the show’s company director since 1999 when it was revised from the original “King Arthur’s Tournament” iteration. “It was quite a sight to see. We’ve been rehearsing for about six weeks and going through a lot of conditioning to be able to do all the sword fighting and falling off horses and all the action sequences.”

The production essentially froze the venue for more than a year, even leaving the cast’s belongings in place in the dressing rooms, waiting for pandemic restrictions to loosen enough to bring it back to full speed. The non-human members of the cast and crew required special care, naturally.

“When it closed, we had no idea how long it would be or what was coming next, and we also have the horses, a whole different thing that had to be considered,” he said. “Ultimately they were moved from the barn at the hotel to a ranch and that’s where they resided for this period. They actually got a great vacation, a nice year off to enjoy being horses.”

One of the biggest issues with reopening “Tournament of Kings” was the conditioning of the 14 to 17 horses that stay ready to perform. The animals returned to Excalibur about a month before the rest of the cast to work with a handful of riders on a daily basis and get familiar with the movements of the show. Shelburne said that process “went like clockwork.”

Another complication that made it difficult for “Tournament” to reopen before restrictions were fully lifted was that famous feast that also sets the show apart. While some casino restaurants with live entertainment got back to action quickly during the pandemic year, this operation is clearly on another scale. Dozens of food servers are also part of the team.

“The entire cast and crew is extremely enthusiastic and very thankful to be working again,” Shelburne said. “We enjoy it. That’s why we’re there, and always one of the most fun and unique elements of the show is the audience. They become scene partners with us and they’re always participating, and we’ve really been looking forward to having them there again to become part of the show with us.”