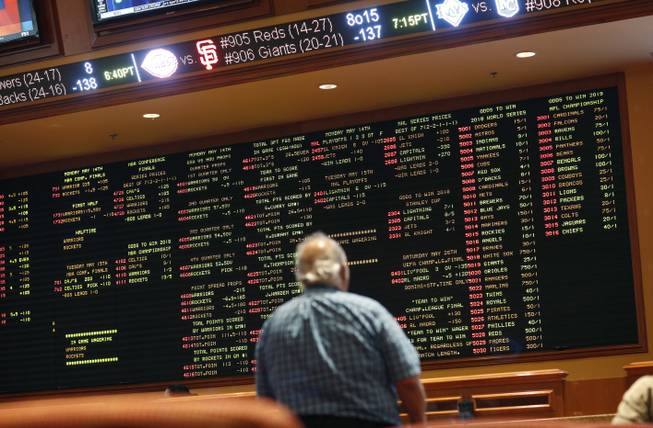 In this Monday, May 14, 2018, file photo, betting odds are displayed on a board in the sportsbook at the South Point.

If Disneyland were shut down, would you still take a scheduled trip to Anaheim?

It’s no longer a hypothetical — the Magic Kingdom has been shuttered, and many sports fans are now faced with a similar question this week as they contemplate whether to follow through on planned getaways to Las Vegas for the opening rounds of the now-canceled NCAA Tournament.

Thursday was supposed to tip off the busiest weekend of the year in Las Vegas, but without NCAA Tournament games to draw thousands of fans (and the hundreds of millions of dollars they would wager on tournament), the Strip will look like a virtual ghost town.

Even before the NCAA announced on March 12 that it was calling off the tournament, the coronavirus outbreak was already driving people to cancel their Vegas plans.

Diehards like Sean Brennan, a Las Vegas native and UNLV alum who has been coming back to his hometown for the first weekend of the NCAA Tournament since 2006, had to pull the plug.

Brennan is a doctor who oversees an emergency room at a hospital in Owatonna, Minn., and he didn’t wait for the NCAA to make it official before he canceled his March Madness plans.

“This year it just wasn’t going to work,” Brennan said. “I killed the trip right away. It’s a bummer. Usually it’s my release for the year.”

Brennan said it would be surreal to see Las Vegas so empty in March.

“I can’t even imagine what it will look like down there,” Brennan said. “It’s profoundly sad, but at the same time profoundly necessary. We have to stop the rate of infection at this point.”

While the vast majority of travelers share Brennan’s caution, some are still willing to make the trek to Las Vegas even if no games will be played this weekend.

Mike Inman of Cocoa Beach, Fla., came with a group of friends last year, and after experiencing the first weekend of the NCAA Tournament in Las Vegas he made a pledge to return every March.

He’s sticking to it.

“March Madness has always been one of my favorite sporting events of the year,” Inman said. “Last year when I went out there, to see that atmosphere, it felt like it was a holiday. It felt like a national holiday. I was hooked. When I got there and saw all that, I said I’m coming every year.”

One year later, Inman is still hopeful to make the trip to Las Vegas. He and his group of six to 12 friends are monitoring the situation and while they’re wary of more entertainment options being shut down in the meantime, they still want to go through with their trip — with or without the buzzer-beaters that make March so addictive.

“Vegas is exciting enough for me,” Inman said. “Not having any sports is kind of a downer. That deflated us a little bit. I’m more interested in gambling on sports than to sit at a card table for a couple hours, but at the end of the day Vegas is still Vegas.”

The few stalwarts are dwindling, however, as the coronavirus pandemic escalates.

Scott Moon lives in Kingman, Ariz., and has been coming to Las Vegas for the opening weekend of the tournament for the last 10 years.

As of Saturday morning, Moon’s group of about a dozen were still all in on their Vegas trip despite the lack of tournament action, unswayed by the threat of the rapidly-advancing virus.

“I don’t consider myself in the high-risk category and I’m not going to completely avoid person-to-person contact anyway,” Moon said, “so I didn’t feel like this would be anything more or less unusual than if I stayed home. I wouldn’t stay home in my house.”

Moon was confident he and his group could still have a good time in Las Vegas.

Eight hours after confirming his trip to Las Vegas was a go, Moon sent a text message to the Sun on Saturday night.