1. Chrissy Teigen is a lucky woman. That’s my first thought as I hear 12-time Grammy-award winner John Legend sing the opening lines to “Ooh La” Friday night at the Chelsea inside the Cosmopolitan. A collective swoon sweeps the room—including from my date. Fun fact: Legend wrote this sexy doo-wop for his wife, and Teigen liked it so much, she got the title tattooed on her spine. Imagine your husband’s music is so good, you’d put it on you for life. Actually, you don’t even need to be married to this man to do that. It really is that good. Legend, standing there on a raised platform in his cream-colored fitted suit, looks so classic, so regal, you’re immediately drawn to him and every lovely thing he has to say. 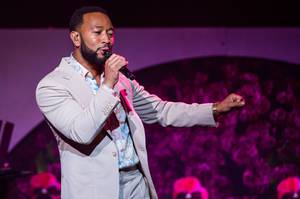 John Legend performs at the Chelsea on September 18.

2. Everything about Legend’s set design screams romance. Lush floral arrangements bloom from the screen behind him and in the middle of the raised platform. Stage lights bounce through every color of Cupid, the stage painted in powdery pinks and baby blues. His backup singers swish and sway in golden dresses that match the golden drapery, afros picked out and beautiful as ever. Vibe established, it’s time to cozy up with a partner—and many do. It’s a seated room tonight, but couples slide out of their chairs, holding each other, keeping that touch alive in the dark. If you weren’t in love before, you might be after this show.

3. There’s no mistaking, we’re at a John Legend concert. An incredible live band of saxophonists, trumpeters, percussionists and guitarists accompany the singer, but the best instrument in the room is his voice. Legend’s rich baritone and tender falsetto somehow equal his sound on his records, and head to the next level live. “U Move, I Move” serves as an astounding example of Legend’s range, so impeccable. The artist’s stage presence drives it all home. On “Penthouse,” he struts and tastefully thrusts. On “Tonight (Best You Ever Had)“ he makes his intentions known: “I want to be the best you ever had, Vegas.” He’s a charming performer, one you could watch for hours and feel like little time has even passed.

4. The evening takes a turn when Legend sidles back up to his piano. The room hushes in anticipation of his next love song. But Legend has a story to tell. It’s about how he grew up in a little town called Springfield, Ohio, “and I always had a dream to be right here where I am now,” he says. Legend narrates his own journey as he plays a medley on the piano, from playing in a small Scranton, Pennsylvania, church to sitting in on a recording session with Lauryn Hill, earning his first appearance on a song (Hill’s “Everything Is Everything”). It’s less interlude than inspiring tale of triumph. “I was turned down by every major record label, sometimes multiple times … Even the one I’m on now, but everybody makes mistakes,” he quips. Legend’s human qualities shine through, despite his Grammy wins, despite his EGOT status. He’s just another guy on the piano.

5. As Legend plays, you start to notice the breadth of his work. No song feels like a stretch for his discography. He’s got music for years, decades even. He could do this all night. In the final quarter of his set, Legend gives fans a sneak peek of “Stardust,” one of many songs he says he wrote during quarantine. “Stardust, it’s a biological factor,” he explains. “We have a piece of the universe inside us. Each of us is special and part of something bigger.” The way Legend sings it makes it sound celestial. And then it hits me: John Legend is a legend. The singer-songwriter’s been a driving force in the music industry for more than 20 years. And every album, every song, every show feels brand new. He’s a performer at his core. A crooning husband at home. And yes, one of the best we’ve ever had here in Las Vegas.