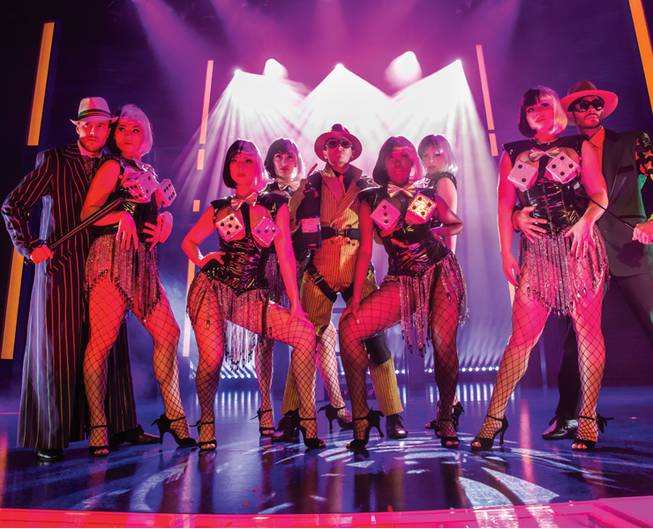 Dancers from the cast of “A Mob Story” at the Plaza. The show could resume on the Strip at Mosaic Theater soon.

Located on Las Vegas Boulevard near the Hard Rock Café and Showcase Mall, the Mosaic Theater is prepared to reopen as the home for a diverse slate of production shows. In fact, it was getting ready to launch scaled-down versions of several shows including male revue “Aussie Heat” and original production “A Mob Story,” which debuted in 2018 at the Plaza, just weeks ago. But rollbacks of the state’s COVID restrictions put a halt to those plans.

Owner and operator Dean Coleman, president of SPR & Promotions and a 20-year veteran of special event promotion and production in Las Vegas, said he’s ready to shift gears at Mosaic in order to put the entertainers from those shows and others back onstage when safety protocols will allow it.

He was planning to operate as a supper club in collaboration with adjacent restaurant Red Palms but was told by county officials to hold off. Coleman has since submitted a new plan and is awaiting approval, but he’s also exploring the theater’s potential as a drive-in or livestream venue.

“I’m not going to do anything against the directives, I just want to be ready,” he said. “I want to be able to hold rehearsals and pay these performers a little bit of money just so they can feel relevant. We’ve implemented everything necessary to get going again and provide a venue for entertainers so they can come and don’t have to worry.”

The 11,000-square-foot space, the rare stand-alone theater venue on the Strip, was the home of legendary local nightlife hot spots Club Metz and Club Utopia in the 1990s. More recently it was operated as Krave Nightclub, Empire Ballroom and the Tommy Wind Theater.

“The reason I got into this venue, from working with a number of shows as a publicist, was simply to put together something that was unique. I wanted to do things differently and create a very production-friendly environment,” Coleman said. “There are many different models out there and nothing wrong with them, but I say there’s a better system that can work for everybody that allows production companies to come in, have creative freedom and exercise different ideas to be competitive.”

“Aussie Heat,” which had been running at the V Theater at the Miracle Mile Shops inside the Planet Hollywood Resort, had a few soft opening shows at Mosaic in late February but didn’t make it to a planned grand opening in March due to the shutdown of live entertainment. An updated version of “A Mob Story” was also set to open in March and later dates were scheduled for Michael Jackson tribute “MJ The Evolution,” a Billy Joel and Elton John tribute show featuring “Piano Man” star Kyle Martin, and all-female musical production “Queens of Rock.”

Ticketed live entertainment events with an audience are not allowed in the current Phase Two restrictions mandated by Gov. Steve Sisolak and there’s no indication that will change any time soon, but Coleman said Mosaic Theater is equipped to begin producing livestream shows in the interim, if aother plans fail to materialize. He said he was paying close attention to the example of local entertainer Mark Shunock’s “Mondays Dark” shows and other livestreams from Shunock’s venue, the Space.

“He’s incredible and it’s great because it’s helping the people who are most affected by this [shutdown], those living paycheck to paycheck in our industry,” Coleman said. “That’s obviously a different model and you have to figure out what to do with these shows and distribution, but we’re pretty much set for livestreaming. I have access to the theater and I just want to be given the opportunity to provide entertainers the chance to come in and work.”