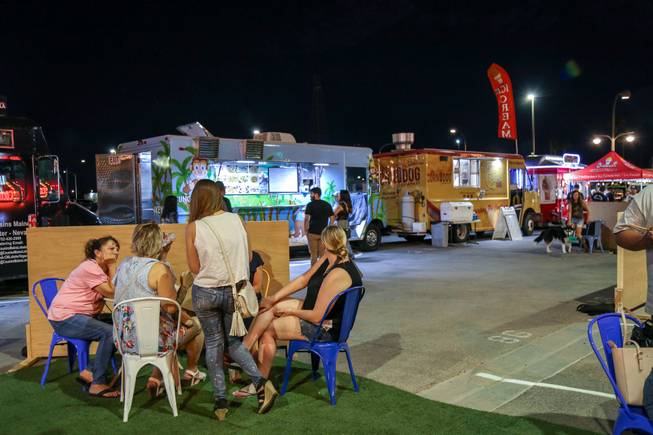 Visitors relax during the first weekend of the Real Awesome Food Park on East Fremont.

Downtown Las Vegas has been food truck central for nearly a decade, since trendy mobile munch wagons first started popping up around the valley. The concentration of bars in the Arts District and the Fremont East Entertainment District along with regular events like First Friday and the El Cortez-sponsored Vegas StrEATs festival from a few years ago have contributed to a food truck-friendly environment in the city’s original neighborhood.

Now a new hub has arrived after making its debut June 14 and planning to serve up food and fun every Friday and Saturday from 4 to 10 p.m. in the Llama Lot parking area on Fremont and 9th streets. The Real Awesome Food Park was created by food trucker Paul Samano and DTP, formerly known as Downtown Project, and it’s looking to extend the action for the Fremont East crowd of locals and tourists and feed people who may be partying at Atomic Liquors and the Bunkhouse Saloon.

“So many other major cities have hubs like this, and with the amount of amazing food trucks here, there’s no reason Vegas shouldn’t have one,” said Samano.

The park’s plans include a different variety of local food trucks each week, curated and managed by Samano and Fergusons Downtown, the DTP-owned renovated motel on Fremont between 10th and 11th. Fergusons recently announced a location of Mothership Coffee Roasters will open there in time for the Life Is Beautiful Festival in September, adding to its planned roster of shops and restaurants.

Chef and restaurateur Dan Krohmer recently opened Japanese eatery Hatsumi at Fergusons and is planning to open a Mexican restaurant called La Monja there before summer’s out.

“I just really liked the whole community aspect of what they’re going for. The stuff they’re doing and the investment is really building the character of downtown,” Krohmer said on the latest episode of Las Vegas Weekly’s All The Vegas podcast. “I live downtown. It’s my neighborhood where I hang out with the people I enjoy, and I was very honored to be included in the project.”