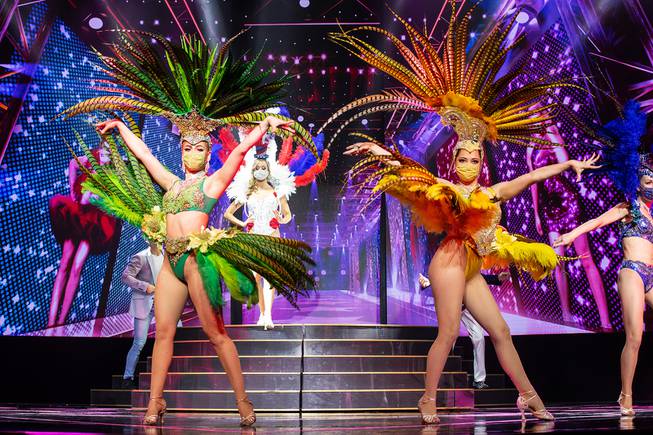 Extravaganza- The Vegas Spectacular performs for a limited audience at the Jubilee Theater inside Bally’s while maintaining COVID-19 safety practices Thursday March 12, 2021.

If you buy a ticket to see “Extravaganza” at Bally’s Las Vegas, you’ll receive an email confirmation a few hours before showtime. Not only will it contain plenty of information about the health and safety protocols practiced at the casino and the historic Jubilee Theater, it will request that you arrive at a certain time to be seated efficiently, using color coded zones.

ast-moving, short line in the casino leading into the theater and an usher will check the digital ticket on your smartphone and remind you of those rules, including the big one that you’ll keep your mask on during the performance. You’ll climb the stairs, grab a drink at the bar on your way inside — just remember to put your mask back on after each sip — and take your seat, which will be at least six feet away from the next party whether you’re in a row or at a booth or table.

When the curtain comes up and the hero of ‘Extravaganza’ takes the stage — just like you, he’s a Las Vegas adventurer looking for a good time — you’ll notice he’s wearing a mask, too. His is clear so you can see his expressions during the performance, even if it fogs up a bit while he’s dancing or leaping across the stage. When a squadron of Las Vegas showgirls appears a few minutes later, their colorful, sequined face coverings match their stunning costumes, a COVID-era version of Strip stage icon that made this room famous during the 34-year run of “Jubilee!”

These are some of the differences you’ll notice at this show right now. None of them prevent “Extravaganza,” the biggest production running on the Strip these days, from being a vibrant and fun live entertainment experience.

But there are many more behind-the-scenes differences you won’t see, including the small but nimble cleaning crew that fully sanitizes the entire venue between each performance — and there are three shows on Fridays and Saturdays. You won’t see how the cast and crew maintains the six-foot social distancing rules backstage, or notice that the choreography and positioning of everyone onstage was changed to create extra space.

You won’t see how everyone involved with “Extravaganza” gets tested for COVID every week, something that is not required of all Las Vegas casino employees. And you probably won’t consider that capacity restrictions combined with those tests and other added expenses means the show is not making much profit, if any, while continuing to stage a terrific production five nights a week since November.

“This whole adventure is kind of an experiment,” says its creator, Hanoch Rosenn. “For almost three months we did the show for an audience of 50, so we had 50 people onstage with the crew and everybody, and 50 in the audience. And I am happy we did it because now we are really ready. With 250 people [in the audience] starting Monday, we are ready to go.

“It’s not always about the money. The fact that we have been there when so many other shows have had to stay closed, it has been good for our cast and crew and we continue to think it is the right thing to do. I think the show has built a name by being one of the only shows to continue on such a scale, probably one of the biggest shows performing in America during this time. Now we have the light at the end of the tunnel.”

The story of “Extravaganza” in Las Vegas seems unbelievable, even considering the pandemic. Rosenn opened a similar variety show, “WOW,” at the Rio in 2017. Its success in the underserved all-ages entertainment demographic created the opportunity at Bally’s, where a planned motorcycle stunt show that would have renovated the Jubilee Theater failed to materialize.

Rosenn developed an affectionate homage to all things Vegas, complete with dancers, showgirls, acrobats, hologram versions of Elvis Presley and Frank Sinatra and the famed Globe of Death motorcycle act and planned to open “Extravaganza” on the Strip last spring. It was performed once to a packed house in the 1,000-seat Jubilee Theater on March 14, 2020, right before the pandemic shut down the Las Vegas Strip.

“That night I was sitting there after the show with [Caesars Entertainment Vice President] Damian Costa and he says, ‘Don’t tell your cast yet but we’re closing tomorrow.’ I took everybody to have a drink to celebrate the first show, and then I had to gather them all together again to say this is the first and last show for now,” Rosenn says.

The casts of both shows include artists from all over the world, and over the next few months, many of the specialty performers returned to their home countries to be with their families or seek other work, he says. When state restrictions loosened in the fall and some shows were able to return, some members of the “WOW” cast — including crossbow archer and “America’s Got Talent” competitor Silvia Silvia and her husband, juggler and comedian Victor Ponce — joined “Extravaganza” while the Rio hotel and casino remained closed. It finally reopened on December 22 but “WOW” has yet to resume performances; Rosenn is hoping that happens this summer.

Incredibly, “Extravaganza” reopened for one night, again, for a restricted capacity audience of 250 people just before Thanksgiving. Coronavirus infection rates were spiking in Southern Nevada and the state tightened up, chopping showroom and theater maximums down to just 50 people.

“All the shows were closing and I thought, I just can’t do it a second time. This is it,” Rosenn says. “Everyone was here and we had great rehearsals and they were all excited, and I can’t do that to them. We are going to continue with 50. That’s it. The show must go on.”

Restrictions were adjusted early in 2021 and on February 15, Strip shows were allowed to admit audiences capped at 100. For “Extravaganza” and the Jubilee Theater, doubling the audience made a huge difference.

“It’s especially big when people cheer and you can see how important it is to these performers and how they react,” says Dov Nudelman, the show’s company manager. “It means everything to them.”

The next big step came on March 5, Gov. Steve Sisolak signed an emergency directive that removed the required 25-foot distance between the stage and the audience, installing a new rule of six feet if all performers are masked and 12 if they are not. Since the Jubilee Theater is one of the few old-school showroom venues remaining on the Strip with layered fixed seating — combining theater-style rows of chairs plus cozy booths and tables on the floor up front — that 25-foot rule presented a special challenge.

“Because the only place we could seat people in wheelchairs is at one of those tables near the stage, we had to change all the positions in the show and actually move everything backwards [on the stage] to keep that 25 feet,” Rosenn says. “There were certain stage elements we couldn’t use and we had to change the lighting and the choreography.”

Today, March 15, the audience limit goes up again, to 250 people or 50% of the venue’s capacity, whichever is less. But Nevada Health Response announced on Friday that events and gatherings such as Las Vegas shows and conventions can exceed the 250-person cap by submitting an event plan to be approved by the state Department of Business and Industry. That means “Extravaganza” could raise its audience to 500 people soon. Rosenn confirmed the show will work toward that goal.

This new easing of restrictions marks another significant step in the right direction for the live entertainment industry but there’s no letting up on the established safety protocols that have been keeping cast, crew and audience members safe at shows like this one for months.

“We are fortunate to be at this theater which is huge and used to hold a cast of 120 people for ‘Jubilee!’ in those glory days,” Rosenn says. “Caesars has been very good with creating these procedures and safety is so important to them. Every problem that came up, we had to solve it together.”

“Extravaganza” performed its 100th show at the Jubilee Theater on February 4. Its current schedule includes shows at 7 and 9:30 p.m. nightly except Wednesday, with an additional 4:30 p.m. performance Friday and Saturday.