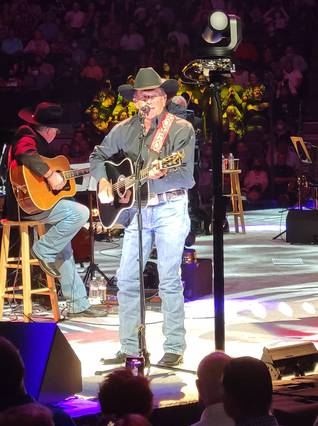 Lindsey Taylor / Special to the Sun

Country Music Hall of Famer George Strait performs Friday, Aug. 13, 2021, on the first night of a two-night stand, at T-Mobile Arena. The two concerts marked Strait’s first return to Las Vegas, his self-proclaimed “home away from home,” since February 2020.

If Las Vegas truly is George Strait’s home away from home, he surely appreciated the downright neighborly welcome he got at his concert Friday night at T-Mobile Arena.

The singer-songwriter, in town for the first time since February 2020, hit the 30-concert mark in his “Strait to Vegas” series, which began in 2016.

“Wow,” he told the audience in a break after “I Can Still Make Cheyenne.” “This is really happening. I’ve been missing y’all.”

Dressed in blue jeans, a black shirt and cowboy boots, and decked out with a black cowboy hat, Strait did what he’s been doing since the 1980s: He entertained with up-tempo ditties about honky-tonks and drinking, heart-tugging ballads and songs about the cowboy way of life in his home state of Texas. And the crowd, which filled T-Mobile with the exception of two curtained-off areas in the arena’s upper reaches, loved it.

Each time he moved from corner to corner on the four-cornered stage set in the middle of the arena floor, Strait drew sustained applause from the audience sections he was directly facing. And they had plenty to cheer about. Over a period of 2 hours and 10 minutes, Strait performed a set of 30 songs — including a four-song encore.

Among those were fan favorites, “I Can Still Make Cheyenne,” “Give It Away,” “Troubadour,” “The Chair,” “Amarillo by Morning,” and a crowd-pleasing “All My Ex’s Live in Texas.”

For those unfamiliar with the song or who need reminding, those “ex’s” include Rosanna “down in Texarkana,” “sweet Eileen in Abilene,” “Allison in Galveston” and Dimple “who now lives in Temple.”

The audience was all-too-pleased to join Strait in sing-alongs on “Amarillo by Morning,” “Give It Away” and, of course, “All My Ex’s.”

In addition to songs from his own catalog, the concert included a foot-stomping rendition of Waylon Jennings’ “Waymore’s Blues,” Townes Van Zandt’s “Lefty and Pancho, and Tom Petty’s “You Wreck Me.”

Strait, still strong of voice at 69 and with a strong stage presence, clearly was enjoying himself, at one time reminding the audience, “We’re not here for a long time, but we’re here for a good time.”

Backing up Strait was his nine-member Ace in the Hole band, which includes Mike Daily on steel guitar and Terry Hale on bass, two musicians who have been with Strait his entire career.

At his Saturday show, Strait announced he’d be back again later this year and early in 2022 with four more “Strait to Vegas” performances at T-Mobile, Dec. 3 and 4 and Feb. 11 and 12.

After all, it’s the neighborly thing to do.