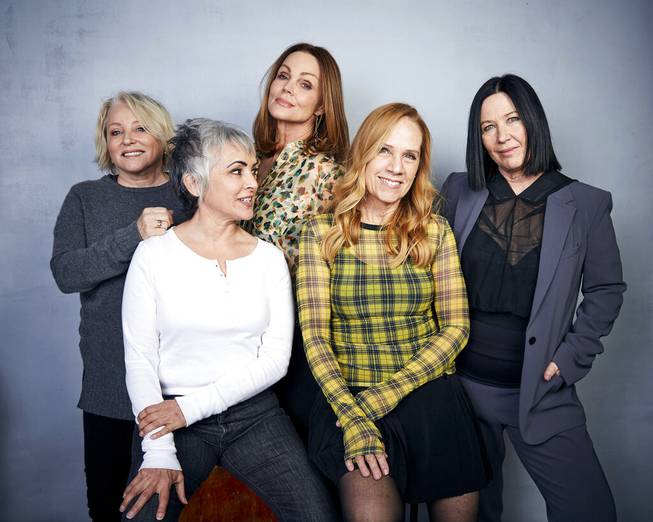 Gina Schock, from left, Jane Wiedlin, Belinda Carlisle, Charlotte Caffey and Kathy Valentine pose for a portrait to promote the film “The Go-Go’s” at the Music Lodge during the Sundance Film Festival on Saturday, Jan. 25, 2020, in Park City, Utah. Defying odds and smashing norms in a male-dominated field, the all-female band, The Go Go’s, which had a string of hits propelled by MTV play in the 1980s, will be inducted Saturday, Oct. 30, 2021, into the Rock & Roll Hall of Fame as part of a powerhouse class that includes Tina Turner, Jay-Z, Carole King, Foo Fighters and Todd Rundgren.

CLEVELAND — The Go-Go’s didn’t have any musical masterplan. Punks at the start, they became rock and roll pioneers.

Defying odds and smashing norms in a male-dominated field, the female quintet which had a string of hits propelled by MTV play in the 1980s, will be inducted Saturday into the Rock & Roll Hall of Fame as part of a powerhouse class that includes Tina Turner, Jay-Z, Carole King, Foo Fighters and Todd Rundgren.

“It’s a little overwhelming,” Caffey told AP as she and her bandmates were whisked from floor to floor. “We’re really thrilled. … We appreciate how gracious everyone has been. We belong here, too.”

While the Go-Go’s are being enshrined in the performer category, rapper LL Cool J, keyboardist Billy Preston, and guitarist Randy Rhoads will be honored for musical excellence.

Not only did the Go-Go’s write catchy tunes like “We Got the Beat,” “Our Lips Are Sealed” and “Vacation,” the Los Angeles-based group stood out as women playing their own instruments — something rare 40 years ago that’s become common in the industry today.

Still, they were dismissed by some critics and musicians who didn’t take them seriously. Caffey said those obstacles only strengthened them.

“We just kept pushing forward,” she said. “We knew there was sexism and it was a male-dominated world in rock, certainly back then. But we kept going, going and going and we’re happy we did that.

“It didn’t faze us. When the five of us get together, we’re a force to be reckoned with.”

The group will be inducted by actor Drew Barrymore and perform some of their songs.

After last year’s enshrinement ceremony had to be entirely virtual due to the COVID-19 pandemic, it’s back on stage, this time at Rocket Mortgage FieldHouse, home of the NBA’s Cleveland Cavaliers.

This is the first time the event has been held at Cleveland’s largest venue (capacity 20,000) following previous ceremonies at Public Hall Auditorium.

There remain some tightly-guarded secrets about the ceremony, including whether Turner, who lives in Switzerland, will attend or if Jay-Z will perform.

Taylor Swift is inducting King and will sing in her honor as will Jennifer Hudson.

The show will be taped for broadcast on HBO and stream on HBO Max on Nov. 20.

Foo Fighters, who played a surprise gig at a small club in town on Thursday night, will be inducted by Paul McCartney. This will be the second enshrinement for Foo’s founder Dave Grohl, who went in as Nirvana’s drummer in 2014.

It’s also the second nod for King, who was previously honored as a songwriter for hits like “It’s Too Late,” “You’ve Got a Friend” and “(You Make Me Feel Like) A Natural Woman.”

King’s iconic 1971 album “Tapestry” had a profound effect on Caffey, who said being inducted along with one of her idols and Turner makes it more special.

“Her influence on me was huge because I grew up with ’60s radio and that’s what she was and still is in my life,” Caffey said. “And Tina, I love her so much. I love them both for the music and what they went through.”

The influence that the Go-Go’s had is equally undeniable. They were not only the first all-female band to top the Billboard 200 chart writing and performing their own material, but they showed a generation of girls they could rock as hard as boys.

Caffey is proud of the band’s lasting legacy.

“Our songs are ageless, timeless,” she said. “We didn’t know at the time when we were writing them, but that’s what happened.”

It also helped that the Go-Go’s rise coincided with the advent of music videos, exposing the band to an even wider audience.

“For young women to see a group of women in a band that are just regular gals,” Caffey said. “That was really huge.”