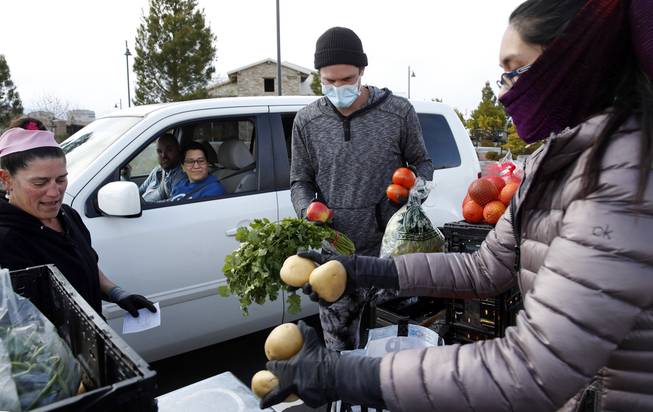 Things have been a little different for customers of farmers markets across the Las Vegas area, and for the vendors, too. With social distancing brought on by efforts to limit the spread of COVID-19, the traditional farmers market can’t work exactly like it did before restrictions.

If you’re Rod Huebert, you find a way to keep your customers a car length apart while they’re doing their shopping. Huebert, owner of Las Vegas Farmers Market and his own Rod’s Produce Market, worked with several sites to convert the traditional farmers market to drive-thrus. Huebert is operating drive-thrus at Bruce Trent Park, at Skye Canyon and at Downtown Summerlin.

He held his first Skye Canyon drive-thru on March 26 with four other vendors. Customers began lining up shortly before the scheduled opening and shopped from the comfort of their cars, turning in from the street and pulling into the line.

They are able to shop at vendors such as Bella’s Sauces, which has items such as baba ganoush, artisan breads, honey and hummus, from the safety of their vehicles. Orders are taken by members of Huebert’s team.

“People are just driving up, placing their order, then we have our two teams who have to scramble and put it together for you and put it in your car for you,” Huebert said. “It’s good for fruits and vegetables, eggs, those types of things. In the stores, if you can find them, there are generally long lines.”

The whole process takes only five to seven minutes once the customer pulls up to the order taker. And it’s a fairly extensive list to choose from, he said.

The have 12 types of citrus, such as Cara navels, blood oranges, Mandarins, he said. They also have greens such as baby kale and red mustard greens, among many other produce items.

It’s a system that has worked surprisingly well for him. About 75% of the clientele are return customers, but there’s also plenty of new faces — those who likely couldn’t find what they needed at grocery stores.

Huebert, a third-generation farmer from Reedley, Calif., an agricultural community in the San Joaquin Valley, drives his produce to the markets himself starting each Wednesday, after spending Monday and Tuesday collecting his freshly harvested product from three farms in Reedley. His refrigerated truck holds plenty of seasonal produce to cover three days of markets.

“We’re actually fairly comparable (priced) with stores on a lot of items,” Huebert said. “We do kind of walk through the stores in the area because we don’t want to be crazy expensive, but there’s a certain amount we need to (make). It seems to take a lot more energy to get a small operation here in town, because we are not a large company and we don’t have warehouses.”

Here are the hours of operation as posted on the market’s Facebook page:

For newcomers to his drive-thru markets, Huebert has some advice: “Just be patient. We are going as fast as we can.”