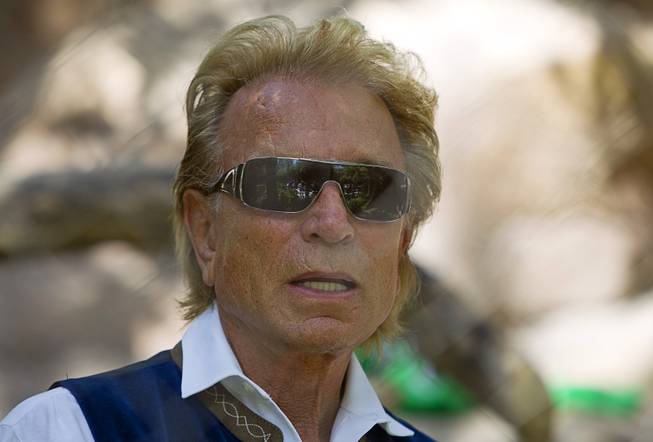 Siegfried Fischbacher, the surviving member of the duo Siegfried & Roy, has died in Las Vegas at age 81.

Siegfried Fischbacher, half of the German-born magician team Siegfried & Roy that captivated Las Vegas audiences with performances alongside big cats, elephants and other exotic animals, died on Wednesday night at his home in Las Vegas. He was 81.
The cause was pancreatic cancer, according to his publicist, Dave Kirvin. His longtime partner in the production, Roy Horn, died in May at 75 of complications of COVID-19.
Fischbacher’s sister, a nun in Munich, told the German news agency dpa that she talked with him Wednesday before he died and they prayed together.
“I could pray with him and tell him that I will always be with him in my heart,” Sister Dolore told dpa. After the call, he lay down and fell asleep, she added.
For a time, Siegfried & Roy was all but synonymous with Las Vegas’ show business industry, with performances that combined smoke machines and white tigers, lasers and elephants, sequined costumes, snakes and illusions of metamorphosis.
The pair stopped their decades-long show in October 2003, after Horn was mauled by a 400-pound white tiger that dragged him offstage during a packed show at MGM’s Mirage hotel and casino. The attack left Horn with lasting damage to his body, and after he spent years recovering, the team made a final appearance with a tiger in February 2009, at a benefit performance for the Lou Ruvo Center for Brain Health in Las Vegas. They retired from show business in 2010.
Fischbacher and Horn, who were domestic as well as professional partners, kept dozens of exotic cats in a glass-enclosed, tropically forested habitat at the Mirage; at Jungle Paradise, an 88-acre estate outside town; and at Jungle Palace, their $10 million Spanish-style home in Las Vegas.
“The world has lost one of the greats of magic, but I have lost my best friend,” Fischbacher said in a statement after Horn’s death. “From the moment we met, I knew Roy and I, together, would change the world. There could be no Siegfried without Roy, and no Roy without Siegfried.”
Horn and Fischbacher, both natives of Germany, first teamed up in 1957 and made their Las Vegas debut a decade later. Siegfried & Roy began performing at the Mirage in 1990.
The pair gained international recognition for helping to save rare white tigers and white lions from extinction. Their $10 million compound was home to dozens of rare animals over the years. The white lions and white tigers were the result of a preservation program that began in the 1980s.
Born on June 13, 1939 in Rosenheim in Bavaria, Fischbacher learned his first magic tricks as a young boy, dpa reported.
Horn and Fischbacher met on a cruise ship in 1957. Fischbacher performed the magic tricks, while Horn became his assistant, eventually suggesting using a cheetah in the act.
They honed their animal-magic show in small clubs in Germany and Switzerland in the mid-1960s. Their break came in a Monte Carlo casino when an agent in the audience invited them to Las Vegas. The pair made their debut at the Tropicana hotel-casino in the late 1960s.
The illusionists became popular in the 1970s, receiving their first star billing in 1978 as headliners of the Stardust’s “Lido de Paris.” Their show “Beyond Belief” opened in 1981 at the Frontier and played to thousands over seven years.
When they signed a lifetime contract with the Mirage in 2001, it was estimated they had performed 5,000 shows at the casino for 10 million fans since 1990 and had grossed more than $1 billion.
“Throughout the history of Las Vegas, no artists have meant more to the development of Las Vegas’ global reputation as the entertainment capital of the world than Siegfried and Roy,” Terry Lanni, chairman of MGM Mirage, the casino’s parent company, said after the 2003 attack that injured Horn.