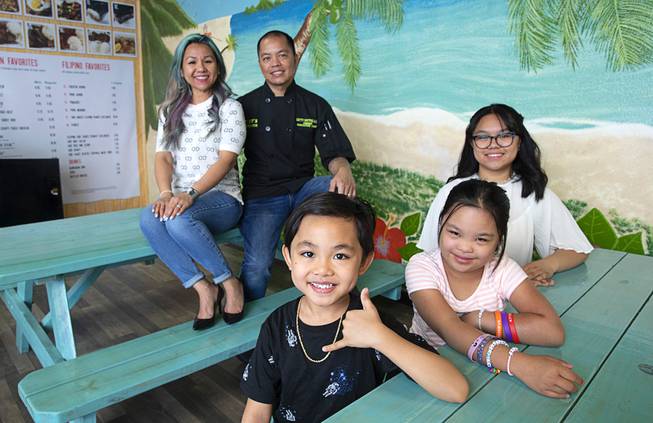 Jeanette and Lefty Battulayan, owners of Lefty-J’s restaurant, sit with their children Jacob, 6, Jade, 11, and Juhl, 14, Friday, July 30, 2021, at the restaurant, 860 E. Twain Ave. Lefty-J’s is just one gathering spot in the Las Vegas Valley for Hawaiians. About 50,000 Hawaiians call Las Vegas home, and community members say they’ve become even closer by caring for each other during the pandemic.

On the walls at Lefty-J’s, a Hawaiian-Filipino restaurant in Las Vegas, is a hand-painted, vibrant orange sun, the blue waters below it absorbing a textured, multicolored sunset.

Two leaning palm trees take the center of the restaurant’s striking mural, which depicts a sweeping, tawny beach and a towering blue ocean.

Co-owner Jeanette Battulayan said the image is an homage to her home island of O‘ahu, Hawaii, and the “Aloha Spirit” of bringing good feelings to others. Her memories circulate around the time her family frequented China Man’s Hat, a beach in O‘ahu, and the waterside dinners of hamburger steaks and barbecue combos — meals that she and her husband, Lothguard “Lefty” Battulayan, have been serving at Lefty-J’s on East Twain Avenue since it opened in 2018.

“It’s one of the greatest memories ever,” Jeanette Battulayan said. “We would always have barbecue at home, like how we would do the barbecues here. It’s old-school style. I mean, the flavor, bursting, and great memories … the true flavors of home.”

Those flavors and spirit of home took on a different meaning during the pandemic, as Lefty-J’s was at the forefront of helping the valley’s many Hawaiian families during the economic crisis. They used their social media pages to promote free meals like chili plates with rice and chicken, and also gave away five gallons of rice per customer.

They tailored their menu to help families. The restaurant’s “Famous 5 Star” offering, a hearty meal of teriyaki beef, barbecue chicken, katsu chicken, fried chicken and kalbi short ribs, was created to be split among family members.

“It was a good way of putting ourselves out there because when customers or locals were looking for places to eat that they couldn’t go in and dine, we were here to pretty much serve them,” he said. “That’s why we started to create our ‘Famous 5 Star’ where it was more of a meal deal, so that way, at those times, families could actually share a meal.”

Las Vegas is well-loved and populated by Hawaiians, so much so that it is affectionately referred to as the “ninth island” of Hawaii. Hordes of tourists from Hawaii also travel to Las Vegas, populating places like downtown’s California Hotel, which serves classic Hawaiian meals like oxtail soup, said David Strow, vice president of corporate communications for Boyd Gaming. In 2019, Strow said that 67% of hotel rooms in the California were occupied by Hawaiian tourists.

Other locals like the Battulayans take root in the city as a cheaper alternative to island living. As of 2018, approximately 50,000 Las Vegas residents are Hawaiian, and over 300,000 Hawaiian tourists visit Las Vegas each year.

They weren’t the only group to lend a hand.

Local organizations like Ninth Island Aunties, founded in 2004, also assisted the Las Vegas community, in particular families that were sick with COVID-19 or whose family members had died of the virus. Founder Cathi Minami said that although Ninth Island Aunties is a designated Asian American and Pacific Islander (AAPI) organization — an aspect they can use to qualify for certain fundraising campaigns like Give In May— she and her volunteers do not turn families away depending on their race.

Ninth Island Aunties finds families in need through word of mouth. Volunteers supported approximately 70 families during the pandemic, Minami said, by making grocery runs and deliveries for individuals in quarantine as well as continuing their usual service of curating and dropping off holiday meal kits.

Give In May, held during Asian Pacific American Heritage Month, is a digital donation campaign for local organizations that assist the AAPI community. The pandemic saw not only increased need for struggling families but also an uptick in hate crimes against Asian Americans, the most prominent incident being the deadly Atlanta-area shooting that targeted Asian-owned massage parlors.

Through Give in May, victory came for Ninth Island Aunties in a sum of $17,000, a figure that would normally take two-and-a-half years to raise, Minami said. She said the organization will use that money to serve about 100 families during Thanksgiving and Christmas.

“They can celebrate just like everybody else in America,” she said.

Celebrations of Hawaiian culture were also commonplace before the pandemic. Little Grass Shack is a Hawaiian radio show, established in 1999, at KUNV 91.5-FM. Every Sunday from noon to 4 p.m., Emory Nihipali, a host on Little Grass Shack, said the show features tunes from classic Hawaiian musicians like Israel Kamakawiwo’ole and Linda De La Cruz. The station also brings on guests like recruiters to inform listeners of job opportunities or doctors to disseminate public health information.

Doreen Hall, president of the Las Vegas Hawaiian Civic Club and one of the radio show’s personalities, said music is imperative to the Las Vegas Hawaiian community because it can give insight into the island’s history. The radio show was also a key platform to discuss pre-travel tips and COVID-19 and flu vaccines throughout the pandemic, Hall said.

“We play our island music, but you see how different platforms can be a positive thing for our community,” she said. “Little Grass Shack has been instrumental during this pandemic to just bring education awareness on our platform while playing music on every Sunday.”

Nihipali used the radio’s platform to discuss his experience getting sick with COVID-19. In April, Nihipali was hospitalized because of the virus for about a week, and months later, he still requires an oxygen tank to breathe normally, he said.

“When I went back to the radio, I tried to let people know, ‘COVID is real, people. It’s real. I’m talking to you,’” he said. “The person that I got it from, that guy passed away. … I’m kind of glad to be alive.”

The Las Vegas Hawaiian Civic Club has propagated Hawaiian culture through language, dance, music, arts and crafts, traditions and values since 1989, Hall said. The civic club also funds several scholarships for young Hawaiians who are seniors in high school or freshmen in college.

During the pandemic, the club held pop-up makekes, or craft fairs, and is organizing the Pacific Islander Festival in early September. Hall, who was born and raised in Hawaii, said the Hawaiian community has blossomed before her in the two years since she moved to Las Vegas.

“It’s a challenge for us to be in other states,” she said. “During this pandemic, we’ve really gotten close because if we can’t take care of one another, we can’t support one another, what’s going to happen?”