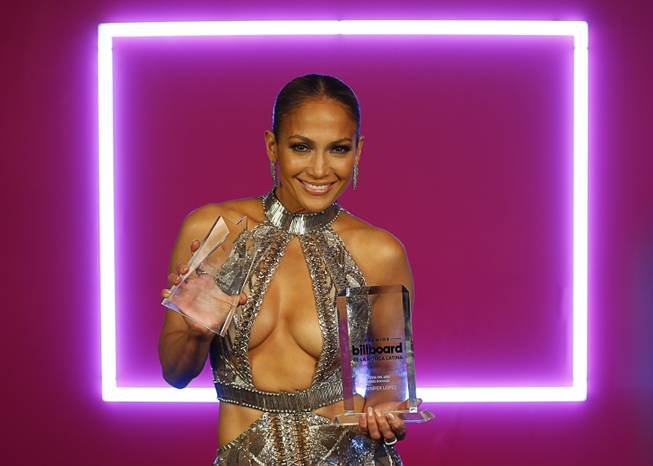 Singer Jennifer Lopez appears back stage with her awards at the Latin Billboard Awards, Thursday, April 27, 2017 in Coral Gables, Fla.

LOS ANGELES — In a small studio tucked into an industrial park next to the Burbank Airport last month, 11 dancers clad in black rehearsed moves for a coming concert, the men brandishing sparkly canes. They were soon called into another studio, where Jennifer Lopez was gripping a glittery microphone, her young daughter hanging off her waist.

“OK, let me see what you guys did,” she said matter-of-factly. They spun, strutted and shimmied for her in a fusion of salsa and hip-hop dance. Lopez nodded in approval and, child-free, improvised some fast hip swirls. She then joined her crew members, matching them beat for beat, grooving seductively one moment and hitting quick, sharp positions the next.

Yep, she’s still got it. And if she blended in with the dancers, it’s because once upon a time she was one of them, part of the support squad. Lopez started out dancing for acts like New Kids on the Block, Janet Jackson and, most famously, as a Fly Girl on the 1990s television series “In Living Color.”

“Before I was anything, I was a dancer,” Lopez said in a phone interview the next week. “It’s so much a part of my trajectory.”

That trajectory comes full circle with “World of Dance,” a new reality dance competition for which she is an executive producer and the lead judge. The show, which is to have its premiere Tuesday, on NBC, features 47 acts from around the world battling in divisions based on age (the youngest is 9) and group size (from soloists to large troupes). Division winners will compete for the modest title of Best in the World.

That definitive-sounding honor and the tournament-like format go hand in hand with the sports metaphors Lopez and others regularly used in talking about the show, citing its athleticism, sense of drama and physical risk. “We had broken bones on the show; we had injuries and emotional breakdowns,” she said. (Several of the show’s creators call it “the Olympics of dance” and refer to contestants as “artistic athletes.”)

Unlike the popular television dance competition “So You Think You Can Dance,” which challenges contestants to perform a variety of styles in routines created by a roster of choreographers, the competitors on “World of Dance” perform their own routines in their preferred styles. And unlike “Dancing With the Stars,” which pairs celebrities with professional ballroom dancers, “World of Dance” features only dancers: no football players, washed-up politicians or former Playboy bunnies.

“My whole goal with this show was to create an opportunity and a venue for dancers to actually be the stars,” Lopez said, and to get to do something they rarely have a chance to do: “really make some money.”

The grand prize is a staggering $1 million. As Meredith Ahr, president of Universal Television Alternative Studio and a producer of the show, said, “Having a prize that was meaningful and life-changing was very important.”

Among those competing for the jackpot are 801 Squad, a ballroom/jazz group from Utah; the French hip-hop pair Les Twins; and Prodijig, a contemporary Irish dance group from Dublin. Also represented are tap ensembles, ballet duos and a flamenco dancer. Some participants have made names for themselves, like the young hip-hop troupe the Lab, which has performed with Justin Bieber, and the Jabbawockeez, which headline a Las Vegas show. Others have yet to “make a brand for themselves,” as Lopez put it, something she said she hoped the show’s exposure would help them do.

Such diversity leads to an obvious problem: “How is a soloist going to compete with a big crew?” asked Derek Hough, a champion ballroom dancer, frequent “Dancing With the Stars” pro and one of three judges on “World of Dance,” along with Lopez and the R&B singer Ne-Yo.

To answer his own question, Hough cited an episode in which a young girl took the stage alone after a large group. “I thought, This is so unfair,” he recalled. “But she blew us away. It just silenced that question.” Referring to the same situation in a separate interview, Ne-Yo said, “One dancer with the right amount of passion can be just as dynamic as 20 people.”

A similar question can be posed about the impossibility of pitting vastly different styles against one another. “World of Dance” will use a numbers-based scoring system that awards points in categories like technique, creativity and transitions. “It’s a rubric you can break down,” Hough said. Unlike other TV talent competitions, there is no audience input. Episodes are prerecorded, and all decisions are made by the judges.

The show’s formula follows a model developed on the competition dance circuit, a robust industry that hops from one convention center to the next across the country, offering master classes and contests aimed at teenage and preteen dancers. The circuit is organized by production companies like World of Dance (the show’s namesake, and one of its producers), which was founded in 2008 and fueled by the eruption of dance on the internet.

“YouTube really grew this phenomenon,” said the company’s founder, David Gonzalez, who recognized dance’s business potential after seeing the reaction to break dancers at a car show he produced. By 2011, World of Dance had expanded internationally and now attracts a significant following on social media and at live events. Lopez said she had found choreographers and dancers from its competitions. After scouting one event last year, network producers invited World of Dance to partner on a show.

Jenna Dewan Tatum, the host of “World of Dance,” is a proud product of dance conventions. A self-described “competition kid,” Tatum was a backup dancer for Justin Timberlake and Ricky Martin before starring in the 2006 dance film “Step Up.” She marveled at how TV dance shows have elevated the image of the dancer in the entertainment industry since she began.

“When I started, the dream was to dance for Janet Jackson,” she said — a dream she achieved. “I’ve watched the dream change for dancers. Now the dancer’s dream is to be the star.”

Tatum also serves as the show’s mentor, motivating and consoling the dancers backstage, which stirred fond memories of “my own teenage self going through this ride,” and sobering ones about “how I’m going to feed myself, pay my rent, get the next job.”

“World of Dance” proved a similarly poignant experience for Lopez. “It’s a struggle to be a dancer,” she said, recalling years of training as a child — her idols were Rita Moreno, Chita Rivera and Michael Jackson — and endless auditions. “It takes discipline and passion, and you have to be relentless.”