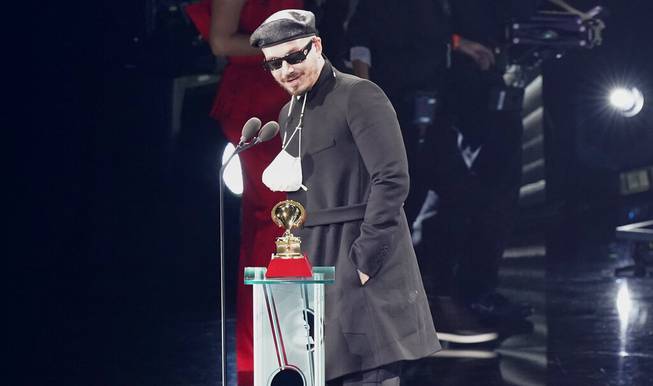 NEW YORK — Thirteen-time nominee J Balvin picked up the first award during the live telecast of the 2020 Latin Grammys, and the Colombian superstar has a chance to make history if he wins the top prize, album of the year, later in the show.

Balvin won best urban music album for his fifth solo release, “Colores.” He was nominated twice in the category, also competing with his collaborative album with Bad Bunny, “Oasis.”

He wore a mask as he accepted the honor at Thursday’s event, airing live on Univision. Because of the pandemic, the Latin Grammys will not have a live audience and did not have a red carpet.

Grammy, Emmy and Tony winner Lin-Manuel Miranda kicked off the show with a strong message about Latin music. Speaking in Spanish and English, he said Latin music “unites all of us and makes us human.”

“This is our night,” he added.

Hours before the show during the pre-telecast, Spanish singer Rosalía — who made history when she won album of the year at last year’s Latin Grammys — continued her winning streak, picking up three more honors. She won best urban song and best urban fusion performance for the hit “Yo X Ti, Tu X Mi,” sharing both wins with her song’s co-star, Ozuna.

It marked the first Latin Grammy wins for Scott and Ozuna, one of the several popular reggaeton and Latin trap musicians who were shut out of the top categories at last year’s show but found redemption this year. Ozuna scored eight nominations and he was only behind Latin trap kings J Balvin and Bad Bunny.

Bad Bunny was also an early winner Thursday, picking up best reggaeton performance — a new category — for “Yo Perreo Sola.” Double winners during the pre-telecast included Natalia Lafourcade, Fito Paez and Carlos Vives, while Ricky Martin and Residente — the most decorated act in the history of the Latin Grammys — also won honors.

Balvin and Bad Bunny have a chance to make history at the 2020 Latin Grammys. Both performers are double nominees for album of the year thanks to their collaborative project “Oasis” as well as their solo albums — Bad Bunny’s “YHLQMDLG” and Balvin’s “Colores.”

It’s a far cry from the 2019 Latin Grammys, where popular reggaeton and Latin trap musicians such as Balvin, Bad Bunny, Ozuna, Karol G, Daddy Yankee, Nicky Jam, Maluma and more were dissed in top categories like album, song and record of the year. As a result social media exploded as Latin artists posted images of the Grammy logo with a large red “X″ across it, with words on the image reading in Spanish: “Without reggaeton, there’s no Latin Grammys.”

Balvin even skipped the live show last year and Bad Bunny, who won best urban music album during the telecast, told the audience: “With all due respect, reggaeton is part of the Latin culture.”

Rosalía won three of four awards she was nominated for Thursday. Last year she won three honors including album of the year for “El Mal Querer,” becoming the first solo female performer to win the top prize since Shakira’s triumph 13 years ago. So far she’s won a total of eight Latin Grammys and picked up her first Grammy Award earlier this year.

Most of the 53 awards were handed out at the pre-ceremony. The show will include performances (most of them pre-taped) by Balvin, Camilo, Ricky Martin, Prince Royce, Anuel AA, Marc Anthony, Pedro Capó, Karol G, Kany García and Sebastián Yatra. Bad Bunny will perform from San Juan, Anitta will sing from Rio de Janeiro and Pitbull will be joined by frontline workers to honor their courageous work during the coronavirus pandemic.

The show is being hosted by Oscar-nominated actor Yalitza Aparicio, actor-singer Ana Brenda Contreras and salsa singer Victor Manuelle, who has replaced singer Carlos Rivera after he said he was exposed to the coronavirus.