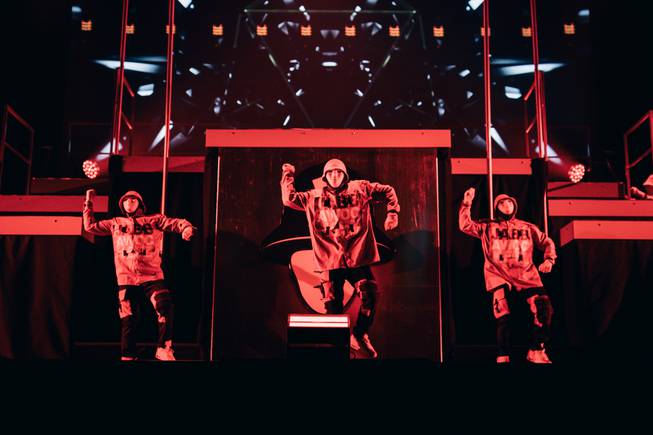 If you’ve seen dance crew Jabbawockeez perform in its headlining residency at MGM Grand, you already know why MGM Resorts recently extended the show’s deal through 2025. It’s a one-of-a-kind production on the Las Vegas Strip, a show that celebrates dance, music and hip-hop culture with an undeniably specific style.

But what these artists have been able to accomplish during the pandemic feels almost as impressive as their decade-long run on the Strip. Jabbawockeez unveiled its latest update, “Timeless,” in March 2020 right before the coronavirus shuttered shows and casinos alike. When it was able to reopen again in November, the show moved from its 350-seat theater at MGM Grand into the expansive, 16,800-seat Grand Garden Arena, adjusting the venue and the presentation to create a special version of “Timeless.”

During the most challenging time in the history of live entertainment in Las Vegas — when producers and performers were often forced to make shows smaller to keep things going — Jabbawockeez may have been the one show to get bigger.

“Jabbawockeez has been one of the world’s most successful, popular and recognizable dance crews for nearly two decades,” said George Kliavkoff, MGM Resorts’ President of Entertainment and Sports. “We are proud of our partnership with these iconic masked stars and, with this extension, look forward to four more years of their nightly high-energy, entertaining performances.”

After more than a three-month break through the winter when COVID restrictions were elevated, “Timeless” reopened at the arena on March 11 and is currently performed nightly at 7 and 9:30 p.m., also making it one of the most prolific productions on the Strip today.

The massive venue has been sectioned off and the Jabbas are essentially performing at one end of the arena, with capacity currently set at approximately 500 audience members. Seating is spread out on the lower bowl of bleachers with additional floor seating in front of the stage.

MGM officials couldn’t confirm how long Jabbawockeez will perform in the arena, but several sports and entertainment events are scheduled there this summer, starting with the Professional Bull Riders Unleash the Beast event June 11 and 12 and comedy shows from Dave Chappelle on July 2 and 9.

Operating under such makeshift circumstances seems like a daunting task, but this talented troupe of dancers and entertainers makes it look effortless. “Timeless,” the fourth incarnation of the group’s Vegas show, is built around an impeccably curated soundtrack spanning various eras and genres of popular music, and those favorite songs boom through the arena while these athletic performers bound between small satellite stages and an impressive multi-level main stage backed by state-of-the-art video screens.

The temporary setup allows Jabbawockeez to show their full capabilities and display why their show is so different from anything else you can experience in Las Vegas. They have an uncanny ability to create bold visuals through ultra-precise choreography. Sitting in the bleacher seats at the arena gives you a full perspective that you might not get in their smaller theater when they return later this year.

It turns out the Jabbawockeez have been putting on a really big Vegas show all along.