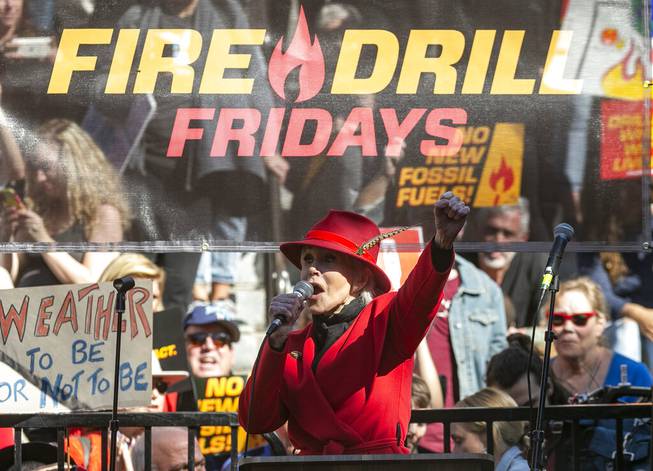 Jane Fonda leads a Fire Drill Fridays rally, calling for action to address climate change at Los Angeles City Hall Friday, Feb. 7, 2020. A half-century after throwing her attention-getting celebrity status into Vietnam War protests, Fonda is now doing the same in a U.S. climate movement where the average age is 18.

LOS ANGELES — Two days ahead of the Academy Awards, two-time Oscar winner Jane Fonda brought her Fire Drill Friday campaign against global warming to Los Angeles on Friday, demanding a dramatic reduction in carbon emissions over the next 10 years.

The rally, which drew a crowd of a few hundred to the steps of City Hall, was the 15th that Fonda has held since last fall. The first 14 were in Washington, D.C., where she and others were arrested multiple times.

Friday’s rally took place just as pre-Oscar events were kicking off all over town, but Fonda, a best actress winner for the films “Klute” and “Coming Home,” never mentioned the ceremony.

Instead, she said she was excited to be home in Los Angeles because California, plagued by wildfires and drought in recent years, “is the front line of the crisis.”

Her audience, largely quiet until she took the microphone, ranged in age from young to old, with many carrying signs supporting the cause.

Fonda, a prominent activist since her early 1970s opposition to the Vietnam War, asked the crowd to demand among other things a 50% reduction in fossil fuel emissions over the next 10 years. She wants that followed by a phaseout of the fossil fuel infrastructure over the rest of the century.