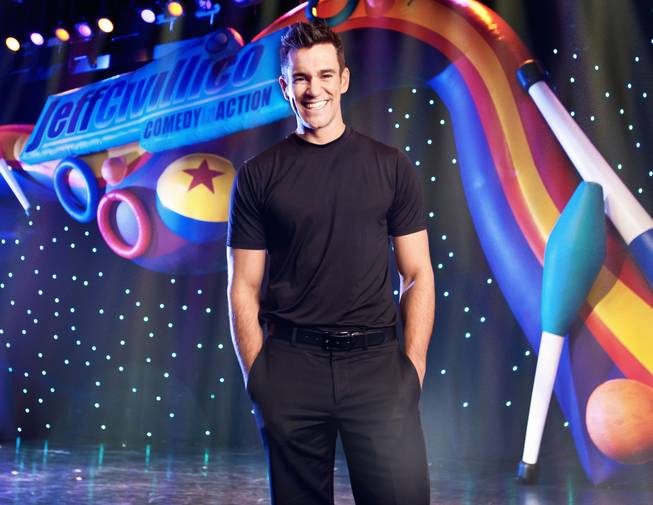 Give Jeff Civillico just one night to entertain you, 75 minutes of unabashed, all-ages fun, and you won’t be disappointed. One night is all he needs.

A Las Vegas Strip headliner since 2012, Civillico has been performing his “Comedy in Action” show — a lot of jokes, juggling and audience participation, a little balancing, unicycling and storytelling — at Paris Las Vegas since November 2017 and just signed on for two more years. His one night is Wednesday, a unique show schedule on the Strip.

When he first opened his own show at the Imperial Palace (which became the Quad which became the Linq) it was six days a week at 2 p.m. … for six straight years. Civillico moved over to the Flamingo at 4 p.m. and then 5:30 p.m., but then an injury forced a short hiatus. After surgery, he continued his relationship with Caesars Entertainment at Paris but had created enough opportunities for himself with private and corporate gigs across the country that he needed a more flexible schedule.

“Caesars was super cool and I had built up enough reputation with them and the ticket broker community to make the one-night-a-week thing work,” Civillico says. “I love the Strip and there’s nothing better than having a show here, but I want to do other things. I didn’t want to be one of those guys who blinks and has been doing [the same thing] for 25 years. I want to break out of the bubble a little more.”

He’s constantly traveling to host convention events and other business gatherings, for TV gigs and private shows, but he’s already broken out of that bubble within his Vegas show. I sat at the back of a nearly full showroom on a recent Wednesday night and watched Civillico charm children and seniors, parents and the party set, with nonstop one-liners, seamless skills and a goofy yet self-aware style reminiscent of Jim Carrey.

“I just try to do something different every night. There are so many shows that are exactly the same every night, and that’s cool but I’m trying to keep the old-school, one-man variety show spirit alive,” he says. “I try to stay present in the moment, respond to the audience and change what I do based on them.”

His other jobs are really just different versions of his Vegas show, tailored to the needs of a more specific audience. And traveling for those other ventures helped inspire his passion project, Win-Win Entertainment, a national nonprofit organization that connects entertainers with opportunities to support and perform for youth in need. Civillico founded Win-Win more than eight years ago and today it coordinates several such performances each week — at children’s hospitals, foster care facilities and other similar spots — in several cities, even working with entertainers who travel a lot like he does to continue to give back when they’re on the road.

Back home in Las Vegas, Civillico also signed on as the celebrity spokesman for the nonprofit Las Vegas Natural History Museum last year and is helping develop new programming and build awareness for the downtown family favorite.

“I love Vegas and I love everything about the Strip, but my mission right now is shining a spotlight on things people don’t know about Vegas or might not be familiar with,” he says. “Like everybody else, entertainers are busy people but they want to give back, and I thought if I could create an easy way to do that, they would, and I’ve been proven right. I never have a problem filling shows, we’re never hurting for people to perform at all the children’s hospitals in town and St. Jude’s Ranch and the list goes on. And it’s the same with the history museum, it’s such a great resource and most people don’t know we have it.”

Jeff Civillico’s “Comedy in Action” is performed at 7 p.m. Wednesdays at the Anthony Cools Experience showroom at Paris Las Vegas (3655 Las Vegas Blvd. South, 855-234-7469) and more information can be found at jeffcivillico.com.