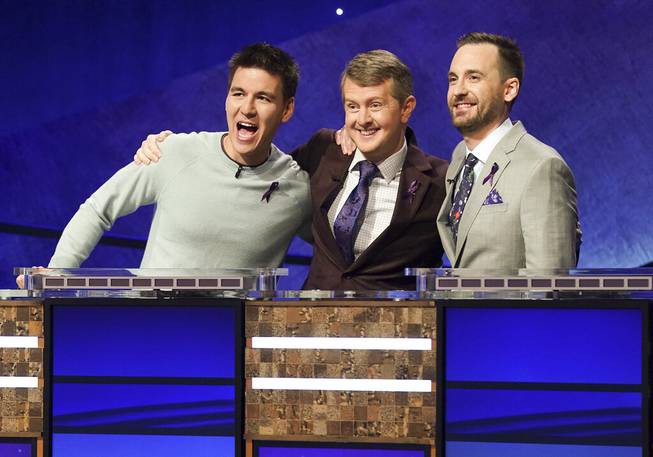 In this image released by ABC, contestants, from left, James Holzhauer, Ken Jennings and Brad Rutter appear on the set of “Jeopardy! The Greatest of All Time,” in Los Angeles.

Just when television executives seemed to have exhausted all options for getting the three most famous “Jeopardy!” contestants back on television, they managed to find another way.

This time, it’s through a different quiz show entirely, one that doesn’t make its contestants turn their answers into questions.

The three “Jeopardy!” stars who in January battled for the title of “Greatest of All Time” — Ken Jennings, James Holzhauer and Brad Rutter — will take turns appearing on an ABC revival of “The Chase,” a new version of a quiz show that airs in Britain, the network announced Monday.

An earlier American version of the quiz show aired on Game show Network from 2013-15, on which Holzhauer faced off as a contestant against Mark Labbett — known as “the beast” — in 2014. He performed so well that he was asked to audition to be a colleague of Labbett’s, The Atlantic reported last year. (He auditioned but was not asked to be on the show, Holzhauer said in an email.)

The new show, which does not yet have a premiere date, will be hosted by Sara Haines, a co-host of ABC’s “The View.”

“The Chase” pits three competitors against a trivia powerhouse known as the Chaser — a role that will be filled by Jennings, Holzhauer and Rutter on a rotating basis. The Chaser is tasked with getting in the contestants’ way as they try to make money while answering up to 166 quiz questions during an hourlong episode.

During one portion of the game, contestants and the Chaser are asked the same multiple-choice questions, racing toward the end of a giant game board with each correct answer. The Chaser, who starts a few positions behind, aims to catch up to the contestants, serving as a sort of know-it-all antagonist (a role all three men should be used to playing).

The new show is aimed to build on the ratings success ABC enjoyed earlier this year when the three men battled it out for the ultimate “Jeopardy!” title. Jennings, who had captivated “Jeopardy!” fans with a 74-game winning streak in 2004, came out on top, adding $1 million to the $3.4 million that he had already made on the show. Jennings is now a consulting producer on “Jeopardy!,” which started its 37th season in September.

Holzhauer’s astounding 32-game streak in 2019, during which he became known for betting big and winning eye-popping single-game amounts, is what set the stage for a faceoff among him, Jennings and Rutter.

Rutter was on the show when contestants weren’t permitted to win more than five consecutive games, preventing him from winning more during the regular season. But he has won more money on the show than Jennings if you include all of the winnings he amassed during special tournaments. (Rutter did not win a match during the “GOAT” tournament, and Holzhauer often rubbed it in with snarky comments about his performance on social media.)

Still, the contestants celebrated the new deal Monday, with Jennings tweeting, “The boys are back,” and Holzhauer joking about the dearth of new movies to catch up on from the slow pandemic months.

The first three episodes of the “Greatest of All Time” tournament raked in an average of 14.9 million viewers each, according to Nielsen data. The tournament aired for a second time in May.