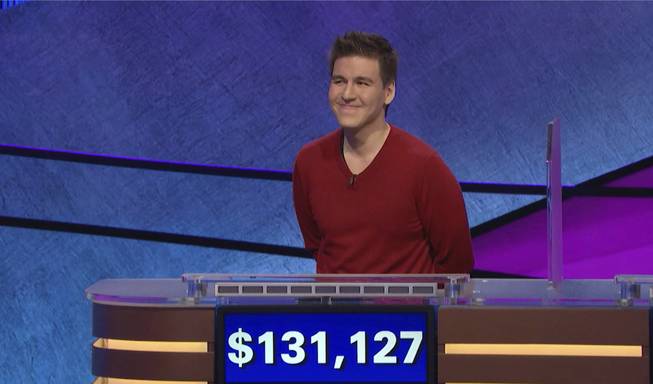 This file image made from video shows “Jeopardy!” contestant James Holzhauer on an episode that aired on April 17, 2019. On his 14th appearance Tuesday, April 23, 2019, Holzhauer eclipsed the $1 million mark in winnings.

In a television event unlike anything “Jeopardy!” has staged before, three of the game show’s record-breaking players — James Holzhauer, Ken Jennings and Brad Rutter — will compete against each other for the sweeping title of “greatest of all time.”

The show’s announcement Monday came shortly after Holzhauer, the most recent player to become a household name, won the Tournament of Champions after facing Emma Boettcher, the contestant who ended his 32-game streak earlier this year. Holzhauer’s dominant strategy and high-value bets made him into a national celebrity and set the stage for a matchup of this magnitude. “Jeopardy!” is milking the combined stardom for all it’s worth.

All three players hold records on the game show’s hall of fame. Jennings captivated “Jeopardy!” fans with a 74-game winning streak in 2004 during which he made $2.52 million, which remains the highest total winnings during regular-season play.

Rutter has won $4.7 million during his time on the “Jeopardy!” stage, including tournaments, making him the highest-earning contestant on television game shows, according to “Jeopardy!”. Rutter was on the show when contestants couldn’t win more than five consecutive games, preventing him from winning more during the regular season.

“Jeopardy!” likes to say that Rutter has never lost to a “human opponent.” (In 2011, Rutter and Jennings competed against IBM’s Watson computer, which beat them both.)

Starting in April, Holzhauer, a sports bettor from Las Vegas, became known for winning eye-popping amounts of money during a single game. Early on, he set the record for the most money won during one game ($110,914) and then surpassed that three more times, eventually setting the record at $131,127.

Holzhauer was positioned to surpass Jennings’ $2.52 million mark on his 33rd game until Boettcher defeated him. Including his winnings in the Tournament of Champions, Holzhauer has amassed $2.7 million.

The first contestant to win three matches will win the game show series, which starts Jan. 7. The matches will continue throughout that week until someone wins. It’s the NBA equivalent of LeBron James vs. Michael Jordan vs. Wilt Chamberlain, turning a parlor game about “who is the greatest” into a real-life showdown.

The champion will receive $1 million and the title of the game show’s “greatest of all time.” The runners-up will each receive $250,000.

The show is airing on ABC during prime time, a rarity for “Jeopardy!”