As soon as a new superstar headlining residency show is announced in Las Vegas, the speculation begins: What will this artist present onstage to distinguish this show?

Jennifer Lopez danced in a New York City subway train. Lady Gaga descended from the ceiling playing a keytar, then later, brought out a giant gleaming robot. Some go all out with elaborate and expensive set pieces, some pay tribute to classic Vegas production shows, and most make use of huge LED screens surrounding the stage with dynamic, unique visuals. 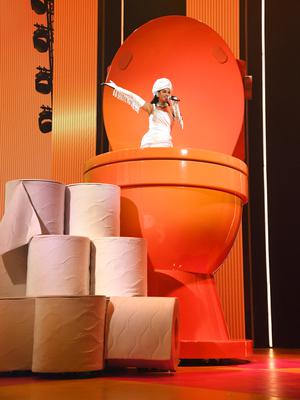 When Resorts World and AEG announced Katy Perry would be one of the new property’s opening headliners, everyone knew the pop star who has given her fans some of the most colorful and campy concert tour props and presentations would bring something visually special to the Strip. At opening night of her Play production at the sold-out, 4,700-seat Resorts World Theatre on December 29, Perry blew all expectations away.

Densely packed with hit songs and fan favorites, some of the biggest and silliest stage props ever seen in a Vegas show, and an eye-popping, kaleidoscopic array of colorful video content and production effects, Play follows the journey of Katy Doll, who is purchased from a vending machine at the Perry Playground arcade and mistreated by a boy named Henry in a sort of twisted version of Toy Story. A psychedelic animated video creates the narrative as Perry assumes the live-action role of Katy Doll, performing rollicking versions of “California Gurls” and “Waking Up in Vegas” after emerging from a 16-foot-tall orange toilet bowl where the cartoon Henry thoughtlessly deposited the cartoon Katy. This is the second act, after Perry has already dueted with the equally gigantic and quite musical bed and chair on “Chained to the Rhythm,” showing shades of Pee-wee’s Playhouse.

It’s an overwhelming debut, and incredibly, it continued for nearly two hours Wednesday night, with Perry’s devoted followers (the KatyCats) screaming, singing and dancing along. Katy Doll makes her way from the bathroom to the backyard and into a trash can before being retrieved by a loving little girl and reunited with her friends from the arcade—you know, Left Shark and the Roaring Lion and all the rest. Perry shuffles through an infinite supply of brilliant costumes created by Zaldy, Heather Picchiottino and Johnny Wujek, and never seems to tire of cranking out the hits like “Hot N Cold,” “I Kissed a Girl,” “Part of Me” and “Wide Awake.” She slowed briefly for a quick version of 2007 track “Lost,” eliciting more shrieks from fans clamoring for deep cuts.

The finale finds Perry going full Vegas glam in an incredible yellow and orange rhinestone dress and parading with her singers and dancers across a sprawling, sparkling staircase, belting out “Teenage Dream,” “Smile” and “Roar.” Then she returns by herself for the most powerful vocal performance of the show on Whitney Houston’s “Greatest Love of All” and her own 2010 megahit “Firework.”

Perry has never been afraid of kitsch, or using it as a tool to create emotional connections through her music. With Play, it seems she’s found the perfect time and place to design the candy-coated musical party of her dreams, ably assisted by producer and lighting designer Baz Halpin and his Silent House Productions, which is credited with the set design. Halpin’s work similarly suited Britney Spears’ and Gwen Stefani’s residencies at Planet Hollywood’s Zappos Theater, but Play eclipses those productions in terms of pure visual fun.

This is a wild one. There’s so much happening onstage during every moment, you couldn’t possibly absorb the full experience in one viewing. Most importantly, it rewards Perry’s fans over and over for making the trip to Vegas to see her at her Katy Perryiest.