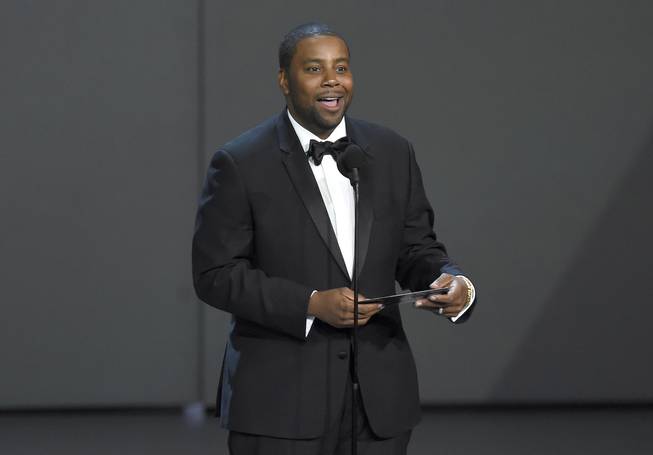 Kenan Thompson will host a showcase at Jimmy Kimmel’s Comedy Club this weekend.

The longest-tenured cast member in the history of “Saturday Night Live” will be visiting Las Vegas this weekend to help two lucky performers live out their own comedy dreams.

Kenan Thompson’s “Road to NYC” comedy competition showcase includes a children’s event on January 18 and an adult comedy showcase on January 19 at Jimmy Kimmel’s Comedy Club, located on the Strip at the Linq Promenade. Thompson will host the shows and the performers will be evaluated by a panel of VIP judges, and the winners of each showcase will earn a trip to New York City to perform at Caroline’s on Broadway and get a behind-the-scenes look at “SNL.”

“This is just me gifting back a platform to some voices that need to be discovered, a little competition that will bring people to New York to see what it’s like to hang at ‘Saturday Night Live’ and have the whole New York experience,” Thompson says. “Hopefully they’ll make some connections and it will go from there.”

A child star who broke through on Nickelodeon TV shows “All That” and “Kenan and Kel” before joining the cast of “SNL” in 2003, Thompson hosted the NHL Awards in Las Vegas at Mandalay Bay in June. But he’s actually a former local, having lived in Henderson for four years before moving to New York.

Here’s the rest of my conversation this week with Kenan Thompson:

You crushed it at the NHL Awards last summer. Are you looking to do more in Las Vegas?

I had such a good time. I’m just looking to do more stuff in general and I’m glad they’re bringing me back to Vegas. I used to live at Lake Las Vegas back when I first got “SNL.” I was more associated with L.A. at that point and I don’t think I’d ever been to New York for more than two days. I really liked [living in Las Vegas] and Henderson was way more chill. We’d come to the Strip just for the restaurants because all the best restaurants are all together in one place. It’s amazing.

Any chance you might move back at some point?

It’s possible. We spent New Year’s there and then got up on New Year’s Day and went to a state park in Utah. And Las Vegas has really changed its reputation in recent years, especially getting the Golden Knights and the Raiders. That’s going to be insane.

You’re hosting this stand-up comedy showcase and you’ve done something similar on the NBC show “Bring the Funny,” but you started as an actor and comedian. Have you done much stand-up?

I do these little college gigs here and there and talk about my life a little bit, but I’ve never really developed a full set, an hour’s worth of observances or quirky things I think about. I’ve just never had the time to do that, and I never wanted to put up a special just because I have a name in comedy. I have too much respect for that. So I don’t know if that’s in the cards for the future because you have to dedicate a lot of evening time to it, and I have kids. But it’s all I listen to in the car. I don’t even listen to music anymore, it’s all comedy.

What’s the status of your new sitcom “The Kenan show?”

We shot the pilot and we’re back into creative talks and stuff like that, but I believe that as soon as “SNL” is done this year, we’ll be shooting this summer and launch in the fall. It’s really happening and it’s so exciting.