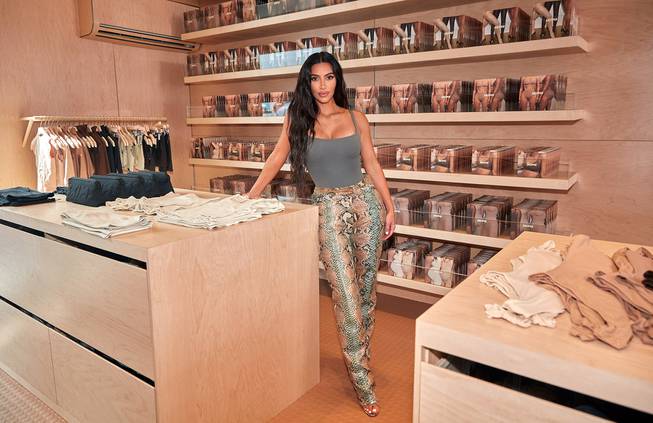 Kim Kardashian West in her Skims pop-up store in Los Angeles on April 7, 2021. Her shapewear company, Skims, is now valued at $1.6 billion, even as shoppers shifted to looser-fitting clothes during lockdowns.

Not long after Kim Kardashian West launched her shapewear brand Skims in 2019, pandemic lockdowns consigned its body-fitting product line to the back of consumers’ closets.

But Skims survived. Moreover, it has become a billion-dollar business.

The company has raised $154 million in new funding, which Kardashian West said had lifted its valuation to $1.6 billion. It is a heady amount for a not-quite two-year-old clothing brand, even one led by someone with her star power.

It also cements Kardashian West’s status as a billionaire in her own right. In announcing her entry into that club this week, Forbes estimated Skims’ value at much less than that. She will remain Skims’ biggest shareholder after the deal, and she and her business partner, Jens Grede, will control a majority stake.

Skims benefited from a well-timed introduction of pajamas and loungewear, with product lines such as the “cozy collection” bolstering sales as women have traded form-fitting styles for sweatpants. But shapewear made Skims famous, and it remains the company’s central product line.

“We’re your basics go-to,” Kardashian West said in a Zoom interview as she prepared for a photo shoot, even as “we’re still able to keep that shapewear core.”

To justify its valuation, she is counting on a return to normal — or, at least, to squeezing into tightfitting clothing again — to keep up the momentum.

Skims also isn’t Kardashian West’s first foray into clothing. She and her sisters Khloé and Kourtney had a line with Sears that essentially served as a licensing deal over which she had little control.

Kardashian West said she was deeply involved in Skims, from helping to design fabrics and collections to picking photographers for product shoots to studying sales data. (And like most things Kardashian, Skims has at times been a family affair: Kanye West, Kardashian West’s now-estranged husband, was “super involved” in the beginning, giving frank criticism of early designs for Skims packaging, she said.)

Skims is one of several new e-commerce-first clothing brands — a group that also includes Heist Studios and Honeylove — to spot an opportunity in the shapewear business, which has for decades been dominated primarily by one company, Spanx. Before 2020, when sales of shapewear dropped 30%, the category consistently generated just over $500 million in sales a year, or 3% of total apparel sales, according to NPD. Like other shapewear startups, Skims was aiming for the younger end of the market.

Skims defined itself with an emphasis on inclusivity, offering nine sizes, up to 5X, in as many skin-tone shades. Within its first nine weeks, it had racked up 2 million names on its waitlists, Grede said. To date, Skims has sold more than 4 million units, with a customer retention rate of over 30%. Skims products are also sold at the high-end department stores Nordstrom and Britain’s Selfridges and several online retailers.

Skims faced challenges even before the pandemic. One was of Kardashian West’s own making: The company was initially called Kimono, until accusations of cultural appropriation prompted her to change the moniker. (“Even when it seemed innocent to me,” she said, “people didn’t see it that way.”)

Then, in addition to declining shapewear sales during the pandemic, the company suffered delays in sourcing raw material for its fabrics, which hampered its ability to develop, produce and ultimately sell new products.

“We had to figure out different factories and had to get creative,” Kardashian West said. Even so, Skims reported $145 million in sales last year, and expects to roughly double sales to $300 million this year.

By last fall, the company was being courted by potential investors. Kardashian West and Grede eventually homed in on Thrive Capital, the venture capital firm that has backed consumer businesses like the eyewear brand Warby Parker and the cosmetics company Glossier. (Kardashian West’s social circle includes Thrive’s founder, Joshua Kushner, and his wife, model Karlie Kloss.)

“We have been continuously impressed by Skims’ ability to connect with consumers on a personal level and keep them coming back for more,” Nabil Mallick, a partner at Thrive, said in a statement.

What’s next for Skims depends on how the pandemic has reshaped the clothing market. “Shapewear, which is really bought for an occasion, has been downtrending during the pandemic, and downtrending substantially,” Grede said. He expects an eventual “rebalancing” of sales across product categories, with demand returning. The signs from retailers such as Anthropologie, which said last month that seven of its top 10 bestselling items online were dresses, suggest that shoppers may be planning to resume dressing more formally.

Kristen Classi-Zummo, an analyst at NPD, offered a more cautious take, reckoning that the category would rebound, though customers who have grown used to comfort will insist on easy-fitting apparel even as they reembrace some aspects of shapewear.

“I do think we’ll get dressed up again,” Classi-Zummo said, “but I do think it will look and feel different.”

Kardashian West said she hoped to build Skims into a “multigenerational brand that will be around for a very long time.”

But she did not rule out eventually selling the business — so long as she retained a role in its operations. “I think I’m open to the conversation, for sure,” she said. But “I would never want to give up my process. I would hope that whoever we partner with in a sale one day would believe in that, too.”