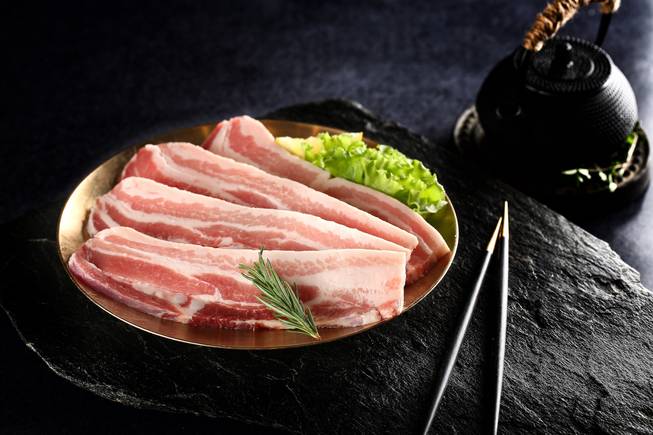 Pork belly grilled at your table will be a menu option at Chosun Hwaro & Nara Teppan.

Korean barbecue restaurants, often all-you-can-eat experiences where diners grill their own cuts of marinated meat on gas or charcoal grills built into tables and share a vast selection of side dishes known as banchan, are among the most popular eateries in the Las Vegas Chinatown district and all over the valley. But this unique culinary experience — and Korean food in general — has never had a strong presence on the restaurant-rich Las Vegas Strip.

That’s about to change. There have been a few free-standing restaurants on Las Vegas Boulevard, and last year, Park MGM teamed with Los Angeles chef and restaurateur Roy Choi to open Best Friend. While it’s not a traditional Korean barbecue spot, the menu is full of Choi’s signature fusion dishes and authentic Korean flavors, and its All You Can Eat Mondays special offers unlimited kalbi beef short ribs, spicy pork belly and garlic chicken straight from the grill (which is in the kitchen and not at your table) for $65.

On July 31, Chosun Hwaro & Nara Teppan will open at the Miracle Mile Shops at the Planet Hollywood resort, billing itself as the first authentic Korean barbecue experience on the Strip. Its South Korea-based parent company Ebadom brings more than 20 years of experience operating more than 200 restaurants in Korea and China to the new Vegas venture, its first restaurant in the United States.

“We are ready to show the U.S. an unforgettable and authentic dining experience with Las Vegas flair from our thrilling teppanyaki shows to unique barbecue items exclusive to our restaurant that will be revealed on opening day,” said Executive General Manager Eli Kim.

Chosun Hwaro & Nara Teppan pairs the up-close-and-personal barbecue experience with Japanese teppanyaki, the flat-top grill style popularized in America by the Benihana chain. The new restaurant’s 13,000-square-foot space will offer 30 Korean barbecue tables and 12 teppanyaki tables with total seating for up to 485, including private dining rooms and a patio space and walk-up bar along Harmon Avenue.

The barbecue section of the menu will feature a cut of beef referred to as the “pearl steak” as well as boneless galbi, pork belly and more. While it may be the biggest traditional Korean barbecue restaurant ever to land on Las Vegas Boulevard, it will also serve a full sushi menu and an extensive selection of cocktails, Korean soju and Japanese sake.