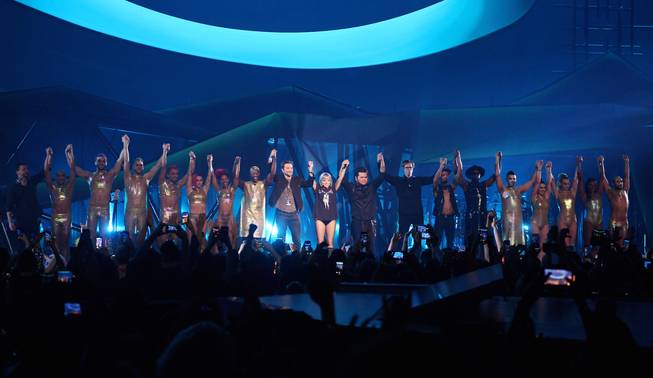 Lady Gaga and her “Enigma” cast mates (plus Bradley Cooper) take a bow at Park Theater on January 26.

Will you come for it? The answer to that question is the deciding factor in assembling a new Las Vegas Strip musical residency show. We already know you’ll pay hundreds of dollars to see your favorite artist in one of our fabulous theaters. That’s not enough. Will you travel to Las Vegas specifically to see this show? If you will, Vegas will make it happen.

That approach puts a lot of pressure on these shows, true concert spectaculars that need to live up to, or exceed, the hype. Lady Gaga has done her part. She opened just before New Year’s Eve as part of Park MGM’s grand opening festivities, made an impact with her different, complementary “Jazz & Piano” show by bringing old-school collaborator Tony Bennett onstage, and grabbed national headlines days ago by coaxing Bradley Cooper, her director and co-star in the Academy Award-nominated “A Star Is Born” film remake, out of the audience to sing a duet with her. 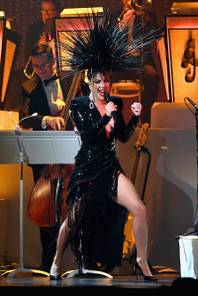 Lady Gaga performs during her ‘JAZZ & PIANO’ residency at Park Theater at Park MGM on January 20, 2019 in Las Vegas, Nevada.

That’s enough buzz for a full run, but she’s only been playing the Strip for a month. All those icing-on-the-cake theatrics wouldn’t matter much if her “Enigma” show wasn’t a deliciously memorable treat. But Gaga doesn’t disappoint. She’s taken all she’s learned from massive tours like Monster Ball and Born This Way and her victorious Super Bowl halftime performance in 2017 and composed an epic production big enough for Vegas and Gaga enough for her most dedicated fans, who are happy to come for it. When I saw “Enigma” on January 24, she read a fan letter from Chile before bringing the fan who wrote it onstage, offering to reimburse her expenses and serenading her at the piano with “Million Reasons.”

Gaga’s monster dance hits like “Poker Face,” “LoveGame,” “Applause” and “Bad Romance” play bigger and with more drama and emotion in Park Theater than almost any other songs from any other Vegas headliner show I’ve seen — and I’ve seen them all. That’s not because she soars down from the ceiling twice during the show, or because she performs atop a giant silver robot before thrashing away at a guitar on an intergalactic mountaintop while flames explode behind her. It’s because of her fans, who won’t sit down or stop dancing until they feel like it. They generally do not.

The science fiction narrative behind “Enigma,” in which an android version of Gaga’s persona guides her through a “simulation” to help her understand her past and her future, is not as jarring as it sounds but does cool the tone a bit, as sci-fi will do. If other headliners tell a story during their shows, it’s an obvious tale of musical maturation. Gaga is giving us extra layers; she can’t do anything the way someone else does it. When she comes out of character and fully connects to the audience during the final act, that connection is stronger because of the cinematic journey we’ve taken together, and when she returns after “Born This Way” for an encore of “Shallow” — even without Cooper singing alongside her — goosebumps cannot be avoided.

So this weekend, when Gaga closes out her current run at Park Theater with “Enigma” shows Thursday and Saturday and “Jazz & Piano” on Sunday, will you come for it? Or if you’re here already for Super Bowl weekend, or if you live here, will you go? Because it’s your last chance, until she’s back in May, when you might be going to see Academy Award-winner Lady Gaga in Las Vegas.