Las Vegas-based author Axie Oh is the kind of storyteller who creates worlds you’ll want to experience. Through her upcoming young adult fantasy novel, The Girl Who Fell Beneath the Sea, readers will be swept away to the “Spirit Realm,” a magical city of lesser gods and mythical beasts.

The story follows Mina, whose village has been ravaged by deadly storms for generations. To appease the Sea God, which Mina’s people believe is responsible, a beautiful maiden is thrown into the sea each year in hopes the suffering will end. Mina ends up in the Spirit Realm after sacrificing herself to save her brother’s beloved, Shim Cheong, from being sacrificed.

It’s a retelling of a classic Korean folktale, The Tale of Shim Cheong, about a dutiful daughter who sacrifices her life to restore sight to her father by throwing herself into the sea.

The Girl Who Fell Beneath the Sea hits shelves—physical and virtual—on February 22. The 32-year-old Oh, who has also published Rebel Seoul (2017), Rogue Heart (2019) and last year’s XOXO, will be at the Writer’s Block for a reading and signing on February 26 at 7 p.m. The Weekly caught up with her to talk about her road to becoming a YA author, her new book and more. 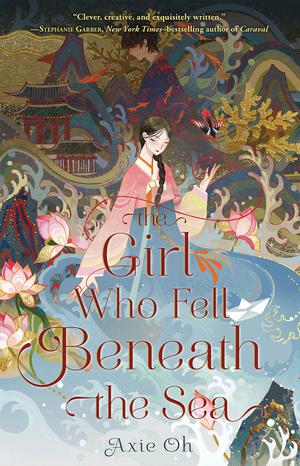 How long have you been in Las Vegas? I was born in New York and raised in New Jersey. I came here when I was 16, so over 15 years ago. I left Vegas for a little bit to go to the University of California, San Diego, and then I got my graduate degree at Lesley University in Cambridge, Massachusetts. I also lived in New York for a year.

When did you know that you wanted to be a YA author? I went to UCSD with a declared literature major, just because that was my best subject. I didn’t really know what I wanted to be, but I always loved reading. Then while I was in San Diego, I actually went to my first book signing to see other authors. It was like a panel for authors, and one of them was an Asian-American author named Cindy Pon. She kind of became a mentor to me. I didn’t know I wanted to be an author until I knew that could be a job … I saw her, and I was like, ‘Oh, Asian people can be authors?’ Literally, a light-bulb moment.

Do you have a favorite YA novel? It changes all the time. I think, classic childhood—it’s not necessarily YA it’s actually middle grade—is Gail Carson Levine’s Ella Enchanted. I loved that when I was a child. My favorite book of all time is The Little Prince.

What significant changes did you make in your version? It’s more inspired by the tale. The only crossover is the character Shim Cheong, who is a side character in my book. The main character is an original character. And that they go into another world. Shim Cheong in the original folktale goes to the Dragon King’s palace. In mine, Mina jumps into the sea and goes to what I call the Spirit Realm, which also has the Sea God’s palace. In that way there’s similarity, but otherwise, it’s completely different.

Who do you think would enjoy The Girl Who Fell Beneath the Sea? I think it’s very family friendly. All ages can enjoy it. It’s very like [Hayao] Miyazaki. People who like Studio Ghibli, people who like Pixar movies.

Were you also inspired by the Studio Ghibli films? Definitely. I’ve watched maybe all of them, and I’ve grown up with them. This book was [pitched as Miyazaki’s] Spirited Away meets [Naomi Novik’s] Uprooted, which is an adult fantasy novel about a girl that gets taken by a wizard. … It has that Ghibli atmosphere and magic.

Do you have a favorite Studio Ghibli film? My favorite film is Spirited Away, but my favorite heroine is from Nausicaä of the Valley of the Wind.

What tips do you have for aspiring writers? We have a Las Vegas chapter of SCBWI here, which stands for Society of Children’s Book Writers and Illustrators. I’m a part of that group. They’re doing mostly online stuff right now, like virtual meetups with agents, [in which] agents do critiques. There are also other groups that meet up for writing critiques. They have a lot of really cool opportunities.

What’s the most valuable lesson you’ve learned there? That being surrounded by other writers actually helps you with your writing, because they motivate you. Showing passion for what you’re passionate about [makes] you feel validated in what you’re doing. And a lot of those writers have supported me in my career.