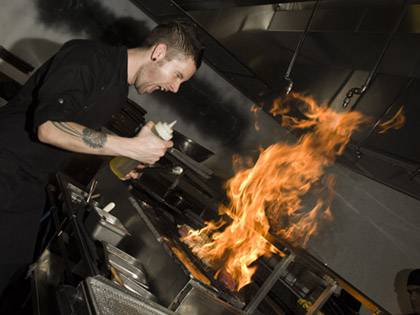 When news broke late last month that the old Burnside Brewing building would soon be home to the first Portland outpost of the renowned Danish brewery Mikkeller, one aspect of the project was left with plenty of meat on the bone: the food.

At the time, all we knew was that Mikkeller planned to pour its inventive beers alongside a “pop-up” menu for at least half a year, or until redevelopment began on an adjacent property.

Shaun King, a chef who helped grow the 350-seat Momofuku Las Vegas into an $18 million a year juggernaut and one of the jewels in celebrity chef David Chang’s crown, is currently road-tripping his way out to Portland with his wife, Jamie Neering, the force behind the bar programs at chef Michael Symon’s Las Vegas restaurants. When they get here, they plan to do what many talented out-of-town restaurant industry vets have done — find a home, raise a family and open a restaurant of their own.

For the next seven months, they will introduce their vision of that restaurant in the old Burnside brewery space in what Mikkeller calls a “pop-up within a pop-up.” But that label doesn’t quite do the project justice. This isn’t some scrappy Monday night affair run out of the back room of a busier restaurant. King and Neering plan to operate a full-service restaurant out of the space, open at least six nights a week, with Japanese brunch on weekends and what might be the most ambitious beer menu in Portland history.

Oddly enough, back in 2010, Burnside Brewing’s food menu had ambitions of its own — who remembers the trompe l’oeil duck confit “cigars” served in a glass tray with dehydrated duck fat “ash”? Yet most of the menu still played in the traditional brewpub sandbox, with burgers, fries and the like.

King is planning something else entirely, a menu of Japanese-leaning drinking snacks, noodle soups and rice dishes paired with cocktails from Neering that draw inspiration and ingredients from the kitchen.

King, who grew up in San Luis Obispo, Calif., says he developed his passion for Japanese food at a young age, taking cues from both his mom, a second-generation Norwegian and “amazing chef” who would cook onsen eggs for breakfast, and his stepdad, who spent time as a gymnast in Japan. Some of his first jobs were at little sushi bars and ramen shops on the central California coast. He grew an appreciation for simplicity — “putting no more than four things on the plate,” as King puts it — and using seasonal ingredients.

Eventually, King found his way to Las Vegas, where he worked his way up the ranks at giant-by-Portland-standards restaurants including SushiSamba and RM Seafood. After spending time in both San Francisco and Chicago, where he met Neering, who was earning a degree in psychology, he returned to Las Vegas in the summer of 2017 to take over the kitchen at the 6-month-old Momofuku Las Vegas.

King and Neering’s arrival is part of an ongoing and unexpected culinary exchange between the Rose and Sin cities. Last year, as first reported by The Oregonian, both Lardo and Pok Pok set up outposts in the Block 16 food hall at the Cosmopolitan. Just last week, Tekka Bar, a hand roll concept in the same complex, went the other way, opening a second location in the former Blue Star Donuts space in downtown Portland. (Meanwhile, Reno has developed its own “Little Portland.” Who would have guessed?)

Momofuku Las Vegas happens to be at the Cosmopolitan hotel. Eventually, King met Lardo chef Rick Gencarelli and Pok Pok’s Andy Ricker and mentioned he was thinking about moving to Portland, seeking easier access to the outdoors, particularly skiiing and mountain biking. They got him in touch with ChefStable owner Kurt Huffman, who happened to be closing a deal to bring Mikkeller beer to Portland.

At the Mikkeller pop-up, which debuts Saturday, June 8, during Portland Beer Week, King and Neering will offer a “minimalist” version of the menu they hope to one day offer at a restaurant of their own. Think oysters served cold with a kimchi vinaigrette or warm with hop-infused butter and trout roe; gochujang-brushed spare ribs with crispy rice crackers; steamed salmon rice with ramp butter and tomato dashi; and fried chicken wings tossed in black pepper soy (an homage to Furaibo restaurant in Nagoya, Japan).

The old Burnside space, currently being remodeled to “infuse the location with … Nordic design characteristics,” per Mikkeller, has more than 100 seats inside and nearly the same amount on its parking lot patio. Most of the food will be cooked from Burnside’s small kitchen, though plans call for the former P.R.E.A.M. oven, extracted after cocktail bar Deadshot took over the old pizzeria space, to be trucked to the Burnside parking lot.

Michigan native Neering, who worked at Las Vegas’ woman-owned Velveteen Rabbit, and more recently set up the bar programs at Mable’s BBQ and its internal speakeasy, Sarah’s, plans to play off of ingredients coming out of the kitchen. “As his menu changes, our menu will change,” Neering says. “We want to be about minimal waste.” Neering might use King’s koji bacon ponzu sauce to fat wash rum for a cocktail with plum juice and lemon syrup. Blackened onion petals might become a garnish for a rye, pisco tamarind and candied cashew syrup drink. Beer cocktails and Mikkeller boiler makers are a must.