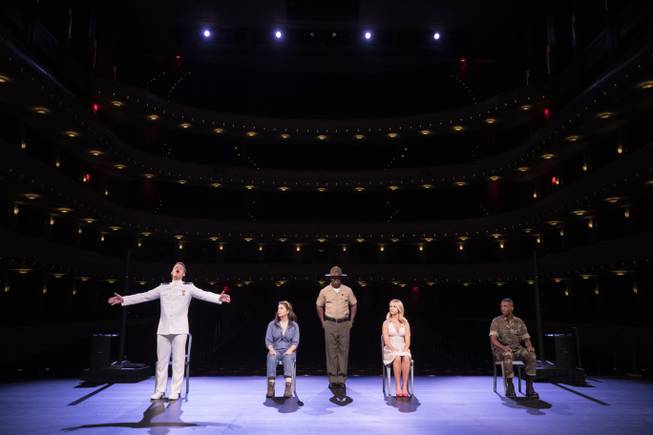 Performers from “An Officer and a Gentleman” provide a preview of the Smith Center’s upcoming Broadway series at Reynolds Hall during a July event.

Every time another Las Vegas show or venue reopens after the long uncertainty of the pandemic, it’s cause for celebration, another significant step back to becoming the entertainment capital of the world once again.

There will be different feelings of relief and happiness Sept. 14 when singer Frankie Moreno takes to the stage at Myron’s at the Smith Center for the first live performance at the downtown performing arts center in a year and a half. First opened in 2012 and home to foundational local arts organizations Nevada Ballet Theatre and the Las Vegas Philharmonic, the Smith Center is one of the most prominent cultural destinations in the valley.

“It’s our artistic home and the community’s artistic home, but more than that, the Smith Center has always represented to all of us this moment in time where community leaders came together and for the first time created an internationally acclaimed performing arts center in Las Vegas,” said Donato Cabrera, music director of the Las Vegas Philharmonic symphony orchestra. “Just being in Reynolds Hall even for a rehearsal and making music, every time that happens it’s a celebration of that, and I never lose that feeling. It’s just so exciting to be coming back.”

The Nevada Ballet Theatre performs “Firebird” by Nicolo Fonte in 2019.

The Smith Center was among the first performing arts and live entertainment venues to cancel shows and shut down in March 2020, and president and CEO Myron Martin has consistently said it might be among the last places to reopen.

“We took a pretty conservative approach to all of this,” he said. “Reopening here, just like it is for every Broadway theater in New York and our many peer institutions around the country, is not reopening as usual but under a new paradigm, which is requiring a COVID test or vaccination and requiring people to wear masks. It’s going to be different for sure.”

The Smith Center announced last month that in order to make all patrons, artists and staff feel as safe as possible, all guests will need to show proof of at least one dose of the COVID vaccination or proof of a recent negative COVID test along with ID. Face coverings will also be required. For the venue’s updated safety information, visit thesmithcenter.com/safety.

While giant concert and festival promoters like AEG Presents and Live Nation are installing similar policies — and the Las Vegas Raiders have done the same for their upcoming season at Allegiant Stadium — Martin said the decision was not an easy one at the Smith Center.

“They were based on science and they were in line with what our national constituents were doing in the larger venues from coast to coast,” he said. “We heard from a lot of people saying thank you for doing this, thank you for looking after patrons and employees and the artists who perform there, but we also heard from a very vocal smaller group of people who just feel like they should be able to go wherever they want without a mask and without a vaccine.”

“These are our friends and neighbors that are coming back first,” Martin said.

The first scheduled performance in the 2,050-seat Reynolds Hall is on October 1 with the Symphonic Rock show, a five-piece band led by longtime Las Vegas music scene fixture Brody Dolyniuk performing along with a 21-piece orchestra. Frankie Valli plays there on October 8 before the Smith Center’s highly anticipated Broadway series returns with “Cats” October 12-17. The series continues this year with “An Officer and a Gentleman” and “A Christmas Carol” and resumes in 2022 with “My Fair Lady,” “The Band’s Visit” and “Tootsie.”

The Las Vegas Philharmonic returns to the Smith Center in October.

Tickets are selling well across the board, Martin said.

“And it’s not for one thing or another, it’s everything. People just want to come back because there’s nothing like having a shared experience with a room full of people, most of whom you don’t know, where you all gasp at the same time or laugh out loud together or feel an emotional tie at those moments in a show together.”

As for the two resident companies, the Philharmonic will be back first in Reynolds Hall on Oct. 23 with a late addition to the schedule. The Phil made some waves when announcing its 2021-22 season would celebrate Beethoven’s 250th birthday by performing all nine of his symphonies, and the overwhelmingly positive response inspired the additional performance.

“We put our thinking caps on and said, what can we do to welcome back everyone and not take away from Beethoven but still be a celebration,” Cabrera said. “We came up with the idea of introducing our new resident artist Joshua Roman with the most famous cello concerto by Dvořák and pairing it with Tchaikovsky’s fifth symphony, which might be his most performed piece.”

The orchestra still won’t gather together as a full group for rehearsal until the week of the concert, but Cabrera said the musicians have been staying positive and practicing consistently for a long time now. “Once the season was announced, all the musicians were just so happy to see those dates in print and we’re really looking forward to those days when we’re going to be rehearsing.”

Nevada Ballet Theatre, which will celebrate its 50th anniversary with a gala performance on May 14, is planning to return to the Smith Center with its best known and most successful production, “The Nutcracker,” starting on December 11. Artistic director Roy Kaiser said the company’s dancers will be reunited in October to begin rehearsals, creating an additional three weeks of prep time than what they typically have for this annual favorite.

“It’s by far the best known ballet we do and I think we can create a lot of excitement around it, an exciting way to come back,” he said. “I taught a few classes for the dancers that were in Las Vegas a few weeks ago and had individual meetings with all of them, and we’re all really excited at the prospect of coming back and starting to do what we do. To have that date out there, that finish line to get to of opening night, that gets everybody going.”

Both artistic companies as well as the venue are approaching the comeback with a new set of circumstances and some innovative strategies. The Smith Center has installed new equipment and protocols to keep its building as safe and clean as possible, including upgraded air filtration systems and electrostatic cleaning devices. And Cabrera and Kaiser agreed that a simple back-to-regular-business approach won’t create the memorable experiences and welcoming spirit required under the circumstances.

“We certainly are going to be doing things in different ways,” Kaiser said. “I don’t think anybody can go through what the world has gone through in the last year and a half and come out of it without making some changes, and for the near future we’re still going to be dealing with the pandemic. As an organization internally, we’ve all learned to just think more creatively and approach parts of our jobs in a different way.”

The return of the Smith Center and all of its programming is essential for the community’s recovery, and it will be a gradual process. It won’t be complete until the Philharmonic and the ballet are entertaining and inspiring audiences once again inside Reynolds Hall.

“It’s a big deal to us to welcome back our resident companies, just on the base level to think about those musicians and artists and dancers are going back to work,” Martin said. “We should be reminded these people are very talented, but this is their job, and the idea that they’re able to go back to work after all this time means an awful lot to all of us.”