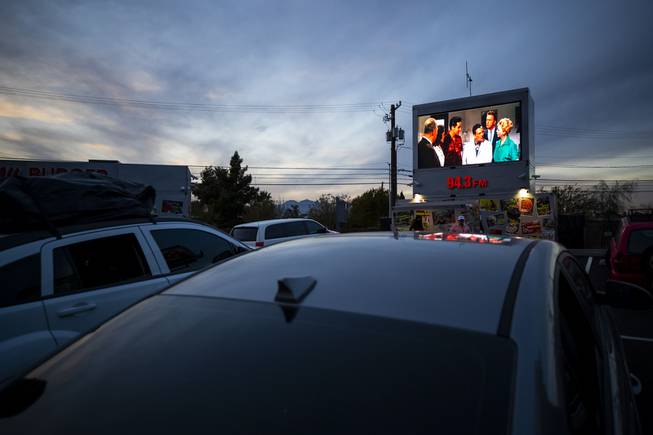 The boutique drive-in theater launched an Elvis movie marathon Wednesday night, set to culminate late Friday — what would have been Presley’s 86th birthday — with a screening of, of course, “Viva Las Vegas.”

Parrino, 31, parked his silver Hyundai in the Snappy lot at about 10:30 on Wednesday night. His late father was a “massive” Elvis fan who played the guitar because Elvis did, and because his dad did, Parrino does too. He thinks his dad would have joined him for the two full days of Elvis.

Presley was a pioneer among crossover entertainers with a diverse filmography, plus, “he fights in every one, too.”

“He was groundbreaking for his time,” Parrino said.

Presley made 30 movies from 1956 to 1969 and Snappy showed them all back to back. Its LED screen allowed daytime viewing, and its onsite burger bar provided sustenance.

The hardest of the core — those who stayed for every single film without leaving their cars for any, yes any, reason — would be rewarded with a special certificate from the Graceland-recognized local Elvis fan club and free Snappy food for a year.

Parrino found his backseat rather small for living in, but he was in it to win it.

One parking spot over were roommates and best friends Oscar Martinez and Rachael Hollister. They’re experienced campers, so setting up in Martinez’s Dodge was easy enough.

Hollister, 25, had only seen a few of Elvis’ films, and was looking forward to seeing “Clambake,” the first she had seen. Martinez, 26, hadn’t seen any, but he’s a multi-instrumentalist and DJ who appreciates the music. Plus, they’re adventurous.

Hollister always wanted to do one of those stamina contests where the person who is last to keep their hand on a car wins it.

“There’s no going back,” Martinez said.

Bob Pinch, 86, and his companion Joyce Dickerson, 83, weren’t there as competitors, just on a date. They took in “Blue Hawaii” after hearing about the movie marathon from an Elvis impersonator on Facebook.

Pinch noted that he was stationed with the Army in Germany at the same time as Presley, but they didn’t cross paths.

They’re huge fans of Presley’s music. “Their” song is “Can’t Help Falling in Love.” Dickerson sings it for Pinch at karaoke night.

Snappy proprietor Jon Bosso, 55, is living a dream with his drive-in.

“I told my wife, ‘I’m gonna own a movie theater before I die,’” he said. She told him to make it clever and profitable, so that’s what he set out to do.

He owns the Heart Attack Grill downtown and added Snappy, at Decatur and Bonanza, to his portfolio about five months ago.

The Snappy concept is retro, wholesome and cozy. Posters of science fiction B-movies, in saturated colors in their mid-century aesthetic, wallpaper the exteriors of the buildings. Employees wear red and white striped soda jerk uniforms.

The theater shows classic TV shows like “Gilligan’s Island” during the day and films that range from “The Exorcist” to “Harry Potter” to “Casablanca” at night. Patrons pass by a small trailer that sells candy and comic books, where they place their burger and shaved ice orders. They pick them up at a converted shipping container/kitchen a few yards away, and if they’re staying for a film, park in one of 18 spots. That’s all the spaces he wants, or needs, Bosso said.

And he’s tying in his own Elvis affection with the movie marathon. As a young fan growing up in Phoenix, Bosso would dress up in white jumpsuit garb and go cruising with his buddies to celebrate the King.

Missed the marathon? Bosso plans to do it again for the anniversary of Presley’s death in August.