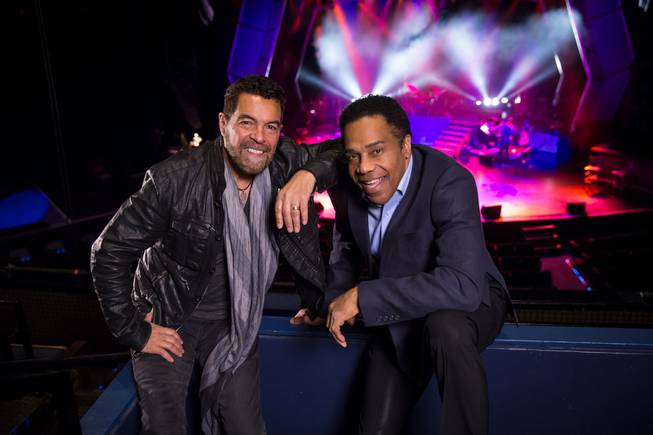 Friends and entertainers Clint Holmes, left, and Earl Turner will be part of the fun for this weekend’s Heart & Soul benefit show.

Broadway in the Hood is celebrating its 10-year anniversary in 2020 and although the COVID-19 pandemic has paused its programming, theatrical productions of all sizes and styles created and run by at-risk youth, clearly the show must go on. In order to boost a virtual summer camp for its students, the nonprofit performing arts organization will present Las Vegas Heart & Soul, a livestream event on May 23 from 5 to 8 p.m., featuring an impressive roster of local and national entertainers curated by show host and local lounge legend Earl Turner.

“Many of these performers are pioneers who were playing Vegas B.C. — Before Celine,” jokes Turner. “They were here when I got to town, people like Jerry Lopez from Santa Fe and the Fat City Horns, Lance Burton, Sonny Turner, Bob Anderson and so many more. They were all here laying the groundwork for all these shows you have in Las Vegas today.”

The show can be viewed free of charge on Facebook Live by following Turner’s page and on Instagram Live by following Broadway in the Hood. Donations for the summer camp program will be accepted then and now at broadwayinthehood.org.

Producer, director, actor and singer Torrey Russell founded Broadway in the Hood in Las Vegas (with the “hood” representing “helping others open doors”) to ensure at-risk youth would have access to theater and training in the performing arts. The group has established a successful residency at the Smith Center in downtown’s Symphony Park and presented a plethora of popular productions through the years.

Turner says he began to understand how many young people take the arts for granted when he started working with the organization.

“A lot of kids have the opportunity to take dance or theater or go to Las Vegas Academy and learn to play an instrument because their family can afford them that opportunity,” he says. “Sometimes you can see which kids are there because of their parents and not necessarily because they want to be there. But with these Broadway in the Hood kids, you can see everyone giving 150 percent because they are happy to be there and they know how fortunate they are. They are reminded that they are following in the footsteps of some of the greatest entertainers of all time and they respect that.”