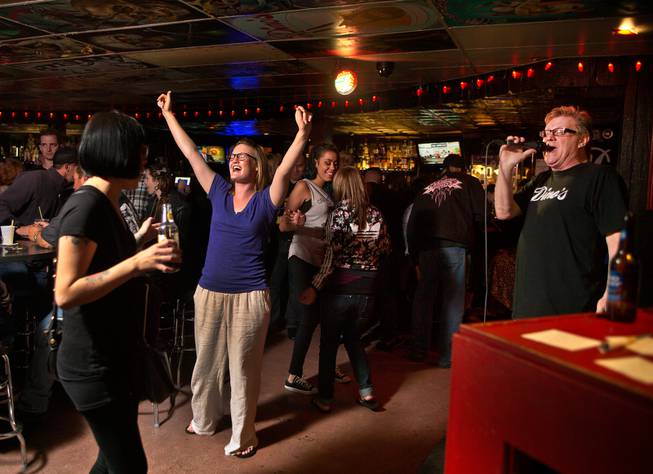 This Las Vegas entertainment legend has a simple philosophy about his craft: “When I went into karaoke, I wanted to share the stage with people, not just hand them a microphone,” beloved karaoke disc jockey Daniel Gobel said. “I wanted to give them their chance in the spotlight, their 15 minutes of fame.”

Better known as Danny G., Gobel has been at Dino’s, a neighborhood bar just North of the Stratosphere on Las Vegas Boulevard, for almost two decades. “Eighteen (years) and three and a half months,” he specifies. But his ride is finally coming to an end.

Gobel’s final day at Dino’s is Oct. 27, and he’s been in talks with an undisclosed entertainment company to help produce his own karaoke show in Las Vegas.

“It’s going to take karaoke to a new level,” Gobel said. “I’ve always had ideas for some time about how to bring karaoke [to Las Vegas] in a way that it has never been done before.”

Hired by the late Chuck Bartolo, son of bar founder Rinaldo Dean Bartolomucci (aka Dino), Gobel knows exactly how many weeks he’s worked (951) and how many karaoke nights he’s hosted. “I’ve done 2,851 shows,” he proudly said. “Dino’s has been so good to me.”

For nearly two decades, Dino’s and Gobel have amassed an international following (his name is even emblazoned on the Dino’s sign overlooking Las Vegas Boulevard). People from London, Germany and Australia have all become regulars at Dino’s, who flock to the local bar to sing on Gobel’s stage, he said. “I have regulars that are international. It’s crazy.”

Originally from Portland, Ore., Gobel has had an interest in show business since he was a teenager. Later in life, he even traveled throughout Canada as a musician with an 11-piece band, sang with Kenny Loggins and even opened for Tower of Power, he says.

In 1991, Gobel moved to Las Vegas and started running karaoke at a different downtown bar before joining Dino’s. He also published the karaoke guide Las Vegas Lounge Entertainment until he stopped production nearly four years ago.

The plans for Gobel’s future karaoke project are still developing, and he says they’re “above and beyond anything that karaoke’s ever seen.” And yes, karaoke at Dino’s will continue even after Gobel leaves. “We have spent the last 20 years building the reputation of having this amazing karaoke,” says Dino’s owner Kristin Bartolo. “It will continue on the same nights as always.”

“People have really endeared me into their hearts, and that’s the most important, invaluable thing to me,” Gobel says. “There are probably a dozen people I know that are married because they met at Dino’s.”

There’s the one time The Killers came in, or the numerous times that Strip musicians would stop by after work to sing and unwind.

On Facebook, patrons and regulars replied to the news with an outpouring of support for their favorite KJ. “The end of an era at Dino’s,” wrote Ray Outlaw. “One of my first hangouts when I moved here,” wrote Don A. Sicard. “You provided me a place to keep my pipes tuned.”

As for Gobel, he’s simply excited to take that same energy to new heights. “Karaoke is a forum for everyone to share their feelings, their music, their passions,” he says. “Those are wonderful things. Being able to put a big smile on peoples’ faces and make their performance light up? That’s gratifying.”