Whether you’re on the job or working from home, there’s a lot of pandemic stress surrounding your day-to-day grind. But if you’re tired of Zoom meetings and finding the motivation to complete the next big project, imagine how tough it might be for the average stand-up comedian to entertain with a 25-foot distance between the stage and a reduced-capacity audience.

“The good thing is, when you’re a comic and you’re just starting out, you do comedy everywhere. I’ve done it in a bowling alley, from a boxing ring, on a tour bus—all these ridiculous places where you can just put up an open mic,” says Bret Ernst, who also plays Louie LaRusso Jr. (Daniel’s cousin) on hit TV series Cobra Kai. “When you’ve been doing it for so long, you can pretty much handle it anywhere. I’ve done it in a restaurant on a table, with a mic up on the booth. There was a laundromat show in LA for a long time. For me personally, nothing throws me off, because I’ve done every room possible on the way up.”

Ernst recently relocated to Las Vegas and locked down the 10 p.m. slot Tuesdays and Wednesdays at L.A. Comedy Club at the Strat, a steady spot for live entertainment since reopening in early October. The club hosts touring acts nightly at 8 p.m. after Redneck Comedy Magic at 6 p.m., and Butch Bradley and friends takes over at 10 p.m. the rest of the week. 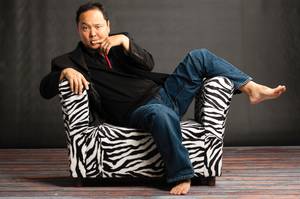 Ernst’s youthful appearance belies the fact that he has been doing stand-up for 24 years, breaking through when he moved to LA and hit the stage at the Comedy Store in 2000. Over the past year, he has traveled wherever the gigs have been, from Florida to California.

“I’ve been able to see how different states have handled it, with all different ideas and mandates everybody is trying to follow,” he says. “The L.A. Comedy Club here does a great job, because they’ve actually moved the stage to the corner to keep the distance.” Ernst was in Austin, Texas, the same week Dave Chappelle and Joe Rogan performed at the legendary Stubb’s Bar-B-Q restaurant.

COVID-19 has impacted every comic’s career, but Ernst says it hasn’t changed his approach or preparation, and he says audiences are ready to laugh at the absurdities of the crisis. “When 9/11 happened, I [performed] that night, and we didn’t mention anything about it. It stung that hard,” he says. “This isn’t stinging. The stupid things about this that people are making fun of … everybody is in agreement about that. It’s almost like students making fun of the teacher together.”

Other Vegas comedy rooms currently open include the Laugh Factory at the Tropicana and the Delirious Comedy Club at Downtown Grand. Brad Garrett’s Comedy Club at MGM Grand recently reopened after originally resuming shows in a ballroom space in November and then taking another break when restrictions tightened up around the holidays.

“Thankfully, that’s not the case now, and it’s back in that cool, intimate environment,” says Paul Ogata, a Hawaiian native and 15-year comedian who’ll perform at Brad Garrett’s February 4 and 7. “I imagine that [ballroom] space was the opposite of what comedy should be. It should be low ceilings, a sort of conspiratorial, speakeasy feel.”

Ogata, who will be back in Vegas to perform at the Strat club later this month, has continued with as many live shows as he can, but unlike Ernst, he has also made the major adjustment of participating in virtual comedy via Zoom.

Still, Ogata says, “Comedy is alive. It’s art and it’s dynamic, and hiding behind a screen is the antithesis of everything we do. I get it, people need to laugh, and people need to continue to do shows, but it’s not the same.

“I like the mystery, the feeling that anything could happen with live comedy. That’s the true magic of it. It’s spontaneous and in the moment, which is why I’ll take any crowd. I’ve done shows for 5,000 people in a huge theater, and for two people on a sinking barge. If it’s live, I’ll do it.”