Two of the Strip’s most prominent and active independent music venues are tackling the COVID-created live entertainment shutdown with different strategies.

The House of Blues at Mandalay Bay reopened on July 1 along with many other venues at the south Strip resort, but the famed music hall that made its debut in 1999 with a Bob Dylan concert remains closed. The restaurant and bar portions are open for dine-in, takeout and delivery, with a full menu of Southern-inspired cuisine ready and available. (Reservations are recommended.) Live acoustic performances are also on the schedule for the restaurant space stage.

“Combined with a musical experience featuring some great local artists, we’re hoping to create a welcome return to a bit of excellent food and entertainment that everyone has been missing,” House of Blues General Manager Will Hodgson said in a statement.

HOB also launched a new “Get Some, Give Some” meal-matching campaign. For every entree purchased, the venue will provide one meal to Project 150, a local nonprofit organization that provides support and services to homeless, displaced and disadvantaged high school students.

“This has been such a difficult time these past few months, not just for our city but for communities everywhere,” Hodgson said. “Project 150 does amazing work for our community, and together we hope to be able to get meals to those struggling.” 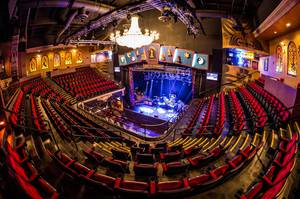 Since they both offer food, drinks and dynamic live music, HOB and Brooklyn Bowl seem easy to compare. But the Bowl’s struggles are very different.

“When you break it down, Brooklyn Bowl is a live music event venue. That’s what we do. We’re also a restaurant, a bar and a bowling alley, but without being able to have gatherings of people and do promoted events of a certain size in a safe way or being allowed to, it’s like fighting with one and a half arms tied behind your back,” White said. “In addition, being upstairs and not having frontage on the Linq is a challenge for dining and has been a challenge since day one.

“We’re nowhere near close to [having] a critical mass to open, but with that said, we are preparing and putting plans in place and viewing technology … for our business to resume when we are able to do promoted events again. We’d love to be able to open now, but to be open as a sit-down restaurant at half capacity is not our business.”

If you’ve seen a show at Brooklyn Bowl Las Vegas, you know the unique way in which its different features function together to create a memorable experience. You can eat, drink, bowl and catch a concert at the same time, an experience you can’t find at any other Strip venue currently offering live entertainment.

With no indication from the Governor’s Office when Phase 3 might begin—or even if concert events would return at that time—it’s impossible to predict when Brooklyn Bowl will return to action. Private events and corporate gatherings connected to large-scale meetings and conventions have become a prominent piece of the venue’s business, and the convention business is blanketed with as much uncertainty as live entertainment.

“When we came into this market, people didn’t know what we were or how you fully consume it,” White said. “Doing all those things at one time is how it all works and what’s so great about it, but … it’s a double-edged sword. It makes us unique but has challenges as well.”

Brooklyn Bowl has also been exploring the possibility of livestreaming shows, similar to the way it has twice from its Nashville location, currently open as a restaurant and bar with entertainment in the lively Germantown neighborhood. And White said the company remains committed to thriving once again on the Strip.

“We believe we will eventually get through this; the question is how behaviors will change,” he said. “I’m not completely sure, but I think it’s going to cut down capacities in the short run of the size of events Las Vegas is able to do. There could be acts that normally play larger venues but can’t because they’re not allowed or it’s not possible, [so] they could play smaller rooms like ours. No matter what, I think we’re going to see more stuff on a smaller scale.”