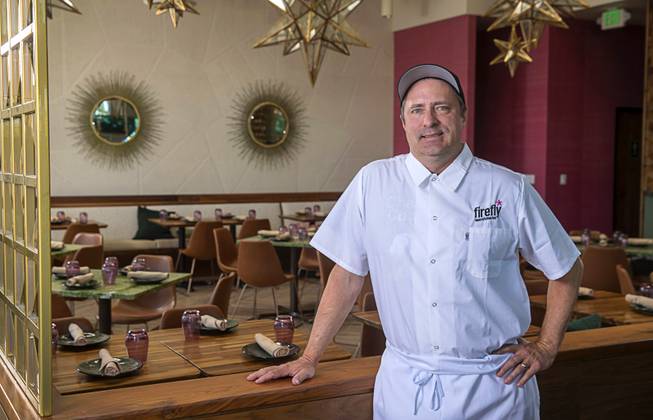 Another familiar local restaurant has joined the fast-moving dining landscape in the southwest valley.

Firefly, which introduced Las Vegas to Spanish-style tapas when it opened just off the Strip on Paradise Road in the summer of 2003, opened the doors of its 2,400-square-foot restaurant at Buffalo Drive and Warm Springs Road this week. It takes over the space formerly occupied by the Goodwich, sharing a retail center with Fukuburger, PT’s Pub and the new Graffiti Bao.

The new location serves a similar menu as Firefly on Paradise, although chef and owner John Simmons says “there are some things here that aren’t there, and some things there that aren’t here. I think this venue is going to be changing [the menu] more often.”

He describes the new 80-seat restaurant as “Firefly 2.0,” and it does have a different and brighter atmosphere than the much larger Paradise store. “It’s not just another Firefly, it’s more of an extrapolation of where we want to go — a smaller footprint, a more simple menu, high-quality food and nice presentations. We spent a lot more on little touches that make it a nice room.”

This is far from the first Firefly expansion. In addition to moving its original location to the expansive current site on Paradise in 2013, Simmons has also operated Firefly restaurants downtown, in Henderson and in the Summerlin area in the last 10 years. He also created Tacos & Beer, which took over his first Paradise Road site and is set to expand at upcoming southwest project The Bend, and is a partner and created the menu for Tacotarian, operated by his brother and sister-in-law Dan and Regina Simmons on South Fort Apache Road. Tacotarian will soon open a second restaurant downtown.

In 2013, an outbreak of food-borne illness at the original Firefly sickened more than 300 customers and caused serious damage to the popular restaurant’s reputation. The suburban locations eventually closed, partially due to a loss of business from the outbreak’s fallout. But the current Paradise location has returned to substantial success since then.

Simmons says he wasn’t planning to open another Firefly in Las Vegas until this location opportunity presented itself.

“I had let the idea lie dormant. I wasn’t considering it because it had been such a long road to recover from the outbreak and the closures and things,” he says. “To be honest, I think we’re better than we ever have bin Business is great on Paradise. We revamped all our systems and management team and we have good infrastructure.

“We had some people sniffing around to possibly open in other cities and I thought that could be a possibility for Firefly, but then J. Dapper brought this place up and it just made sense.”

Dapper is the local real estate developer managing the Buffalo-Warm Springs center as well as the Bend, the upcoming retail, office and entertainment project at Sunset Road and Durango Drive. Established local restaurants such as Lotus of Siam, Freed’s Dessert Shop, the Great Greek and Aces & Ales Brewery are planning to open at the Bend.

The area’s diverse demographics and high number of hospitality workers residing in this part of the valley were the biggest factors in Firefly’s arrival.

“To me, this neighborhood doesn’t have a lot of places to go on a date, or places that are a little more upscale where you can take your family from out of town to that neighborhood joint or go to happy hour with the girls or have a nice brunch,” Simmons says. “That’s something that’s missing from certain spots around town where a lot of the options are quick-serve. I want to be that clubhouse, just the place where people want to hang out and have a good meal, just sit down and get taken care of.”